HomePeople and Company ProfilesTea or coffee? Wize Monkey breaks the mold for both
Recent
Latest
Podcast: Innovation, sustainability and integrity at PCC Community Markets
May 18, 2022
Whole Foods' honors 30 companies with 10th annual Supplier Awards
May 18, 2022
EarthX Film Festival focuses on healthy food, sustainability
May 18, 2022
6 tips to promote consumer understanding of Certified Organic
May 18, 2022
Trending
Debra Stark’s light shines bright on natural products industry
May 10, 2022
Getting ready for 2023: Trends for brands to consider
May 17, 2022
Unboxed: 7 plant-forward ice creams to stock this summer
May 10, 2022
Sponsored Content
The rise of sustainable business – eGuide

Tea or coffee? Wize Monkey breaks the mold for both 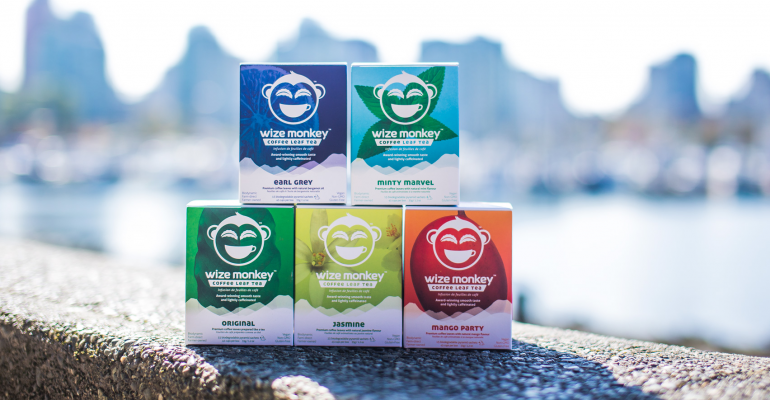 The NEXTY Award-winning brand talks about the impact it's making on farmers and consumers with its coffee leaf tea.

Wize Monkey made waves at Natural Products Expo West in March, where its coffee leaf tea won a NEXTY Award for best mission-based product. The Canadian company says the product—tea made from the leaves of coffee trees—is a smooth-tasting tea that’s not only high in antioxidants and comparable in caffeine to green tea but also provides a social benefit: a year-round source of income for coffee farmers. The leaves can be harvested for nine months out of the year, while the harvest season for the beans lasts just three months.

We checked in with co-founder and CEO Max Rivest about how Wize Monkey fits into the coffee and tea industries, where the company is headed and what the NEXTY Award has meant for it in the last few months.

Congratulations on your NEXTY. Can you talk about what the award has meant for your business and brand?

Max Rivest: It definitely got us on the map in the sense of getting us more industry credibility. We were at the show last year and we had just this tiny little table. We got a lot of eyeballs that we wouldn’t typically have had. And it helps us show people that it’s not only a great product, but it has a pretty tremendous social benefit.

When you tell people you got an award at the world’s biggest natural products show, they take you more seriously. Canadian retailers look at the NEXTY as a big sign of things to come. It helped us get credibility to get the meetings that we wanted. I can’t name specific retailers it helped us with, but it’s definitely helped us to grease the wheel—just get the time and communication going with these people who otherwise would just kind of look at us and think we’re a pet project, a garage business.

What kind of growth have you experienced since then?

MR: We’ve onboarded 30 or 40 store locations—it’s a solid bump in store count. And that’s 30 or 40 stores that are strategic; there are a lot of stores that we say no to. We’ll launch in the U.S. in the next two months, starting in the Northwest.

Who was the first retailer to sell Wize Monkey products?

MR: Greens Market on Broadway in Vancouver. The first chain was Whole Foods Market. We were on the West Coast for the better part of a year, then pushed nationally once we got enough track record on the West Coast. We went national with Whole Foods [in Canada] in December 2016.

You have a product that kind of straddles the coffee and tea categories. Can you talk about what it’s like to be a young brand working in such a new, unexplored space?

MR: I’d say we’re bringing something new to a category that could probably use the innovation, and it never hurts to bridge the gap between coffee and tea. A lot of people are only coffee drinkers or tea drinkers and it’s like, you know what? They’re all good, and the coffee leaf provides a balance between that. We want to be approachable and playful, and serious about creating new products.

We’re also gender-agnostic. A majority of tea brands are focused on females. A lot are purely based on function; those are great, but it doesn’t bring any fun or sexy aspect to a tea company.

We went through so many different names at the beginning. But people kept coming back and saying coffee leaf tea—we said OK, let’s just call it that.

I think it won’t only change the way people think about coffee and tea, but it will change the way the coffee industry operates. It can bring income to people who really need it; it is changing people’s way of living. The way we see it, you have an impact no matter what, positive or negative. We’re doing our best to make it as positive as possible.

What kind of impact are you having on the coffee or tea sector?

MR: If you look at the coffee aisle, it’s so developed in terms of the craft story. Tea fell a decade behind or even more. There’s a lot of space to play in there. It’s really hard to know where it came from, how fresh it is, how clean it is. Unlike the coffee model, where you go direct, it’s entirely different for the tea category.

The industry is so archaic, you don’t know where it’s coming from. We don’t just know where ours is coming from—we actually know who’s growing our product, we know what impact we’re having. Our product comes directly from the farm.

Talk about your packaging. It’s filled with messaging about the full story of the company and the product. What kind of response have you gotten to it?

MR: We have some people in the food and grocery industry saying, you need to simplify, you need to really drill it down. Then we have consumers—anyone under 45, for the most part—saying, ‘I love your packaging; it has so much story and answers all the questions we have.’

We use all the real estate. It doesn’t take that much extra work to print on the inside of the box, and it speaks volumes about who we are as a brand. If we’re going to spend all this effort to get people to pick up a box off the shelf, that box is your one moment to tell your story. If we have that real estate, we’re going to use it to its full potential.

It’s also an expression of our passion for this whole thing. There might be five people who read the inside of the box, but those five people will walk away thinking, ‘wow,’ and tell their friends about it.

What can we expect to see from Wize Monkey in the future?

MR: We’re working on some new blends. Right now we have five main flavors, as well as a discovery pack, a variety of all five. We have a lot of other products we can work with. We have a black tea now, it’s got kind of an amber color, but we can do even green teas from the coffee leaf. I’m hoping we can do that eventually and go from there.

It’s so cool that we get to be the first people that discover new flavors every time we craft these new batches. I just cannot wait to show this to everybody. It’s going to change everyone’s minds about the coffee leaf. People will take it more seriously once we have a black and green.

The future is really bright in terms of what we can do with the coffee leaf. I think we’re barely scratching the surface.

The NEXTY Awards recognize progressive, innovative, inspiring and trustworthy products in the natural products industry. Nominations for the Expo East NEXTY Awards are open through July 21. Submit a nomination here.

Wize Monkey disrupts the coffee and tea categories with a product that qualifies as both
Apr 20, 2017