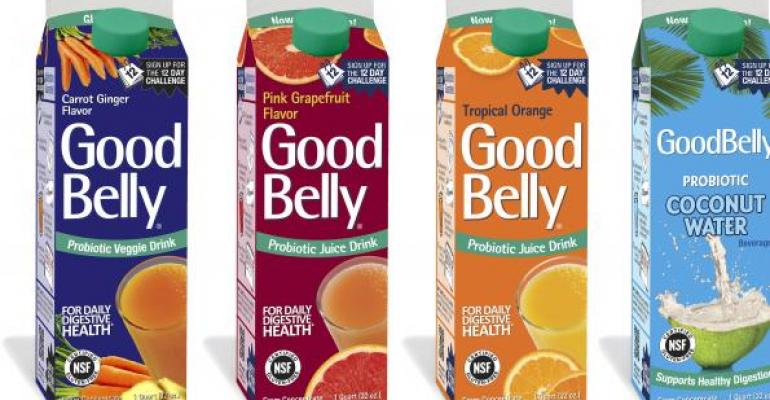 GoodBelly, a line of delicious probiotic juice beverages formulated for daily digestive health, announced that its newest probiotic juice beverage flavor, Carrot Ginger, makes an appearance in a new music video from renowned pop musical artist Kat Lane, called “Miami in the Summer.” The music video is available through Lane’s YouTube channel at youtube.com/KatLaneMusic and Lane’s website at KatLaneMusic.com.Lane’s song “Miami in the Summer” is available on iTunes alongside her Extended Play debut album “The Miami in the Summer EP.”

“We are big supporters of Kat Lane and her music, and love that she’s such a fan of our probiotic juice drinks,” said Alan Murray, CEO of GoodBelly. “We’re thrilled that she has chosen to put GoodBelly in the spotlight during her new music video for ‘Miami in the Summer,’ especially since the sweet, refreshing flavors of our Carrot Ginger mix perfectly with the hot Miami sunshine. We hope GoodBelly and Kat Lane followers everywhere will love the new video just as much as we do!”

Lane’s latest song, “Miami in the Summer,” and is all about having fun in South Florida. The video follows Kat and her group of friends as they enjoy the sun on a private beach with a BBQ and games before heading out on the town to experience the city’s Latin-influenced nightlife. Their evening is filled with exciting entertainment, including Capoeira performers, belly dancers, fire throwers and Brazilian drummers, all against the backdrop of a South Beach staple, the legendary Clevelander Hotel. As Kat and her friends get ready for the night’s festivities, they toast with glasses of GoodBelly Carrot Ginger.

"'Miami in the Summer' was a special video because I got to embody everything from the beach to the nightlife to the Latin aura—some of the great aspects of what my city has to offer," said recording artist Kat Lane. "It let me share some of my favorites with my fans, so toasting with GoodBelly was my way of saying let's celebrate the good life!"

GoodBelly’s probiotic juice drinks are non-GMO, dairy-free, soy-free, vegan and kosher, with several new gluten free options, including Carrot Ginger, Tropical Orange and Fermented Probiotic Coconut Water. Each serving of GoodBelly is infused with 10 to 50 billion cultures of the probiotic strain, Lactobacillus plantarum 299v (LP299V®), which supports daily digestive health. Unlike many other live and active cultures, LP299V® survives passage beyond the stomach’s acidic environment in order to benefit the rest of the digestive system.