Bluebird Grain Farms Organic Whole Grain Einka, Emmer Farro, Einka & French Lentil Blend
Einka, or einkorn, is the most ancient wheat we know of. Bluebird Grain Farms in Winthrop, Washington, specializes in such things. They also specialize in plow-to-package production and organic agriculture. We love this product, which combines not just the sweetness of einka with savory french lentils, but also the way they’ve combined the ancient grain with its complementary nitrogen-fixing rotational crop. “Our goal,” they wrote in their nomination, “is to cultivate and mill the most irresistible, nutrient-rich grain we can, while leaving this land healthier for the next generation.” Amen to that!

Otamot Foods: Organic Sauces
Consumers looking for nutrient density in pasta sauce often turn to the addition of meat. Otamot’s founder sought to achieve this by adding eight or more organic vegetables to each tomato-forward recipe—in traditional, spicy or carrot Bolognese. All are certified organic, Non-GMO Project verified and contain neither preservatives nor added sugar. We applaud Otamot’s efforts, whether it is to steer consumers to plant-based options, help them squeeze more veggies onto the family table or just to provide a tasty, healthy organic pasta sauce.

Kiolbassa Smoked Meats: Organic Tumeric Bell Pepper Beef Sausage
Apparently Kiolbassa is the family name. Crazy coincidence, right? It might, therefore, be divinely ordained that they make great sausage. That they do it with certified organic, never frozen, domestically sourced, grass-fed (and grass-finished!) beef, and are “devoted to enriching the lives of others” (including donating thousands of pounds of sausage annually) must come from some other divine inspiration. Whatever the case, that’s a damn good sausage! 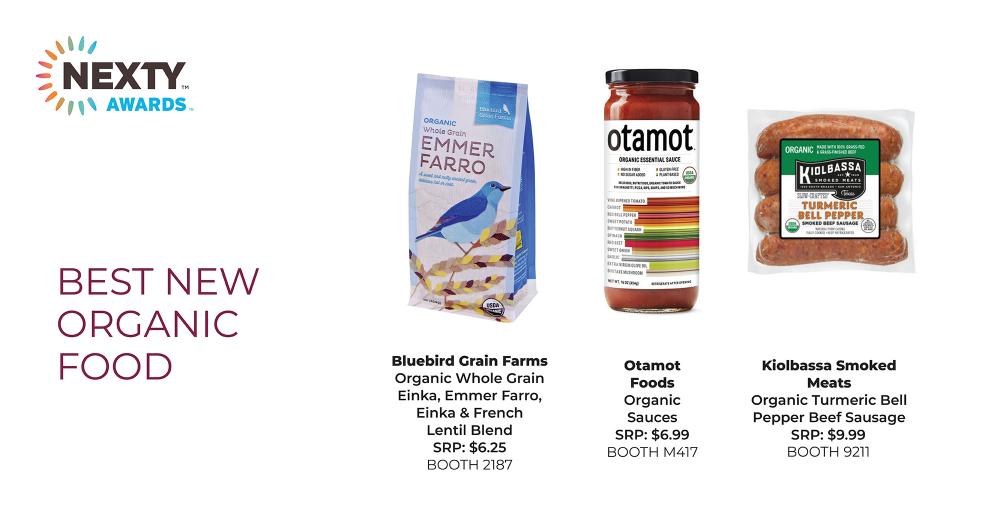 Next Up
Unboxed: 7 plant-forward ice creams to stock this summer
Start Slideshow ›