The pill piece of the keto diet 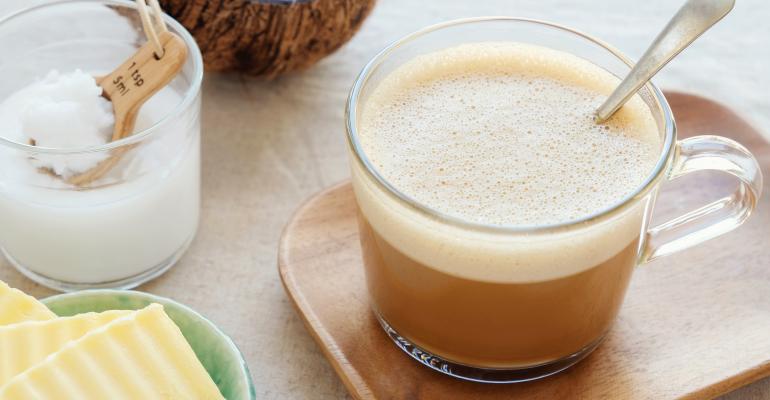 Keto supplements are piggy-backing on ketogenic diet science—often without merit.

It may be nearly 100 years old, but keto is suddenly the latest thing. LeBron James, Gwyneth Paltrow and Kim Kardashian are all big fans, and “keto diet” was the highest-growth food-related search phrase on Google in 2017. Keto evangelists will claim the diet helps melt away fat, sharpen mental focus, boost endurance, enhance sleep and even prevent cancer and Alzheimer’s.

What they might not say is that it is demanding, and no shortcuts to ketosis have been proven.

The diet’s premise is straightforward: when daily caloric intake consists of roughly 75 percent fat, 20 percent protein and only 5 percent carbohydrate, the body won’t have enough glucose in the tank to burn for energy. This forces it to tap into a secondary fuel source, stored fat, which the liver breaks down into ketone bodies, molecules that power the brain and muscles. When the body relies on ketones instead of blood glucose and muscle glycogen it’s in the state of ketosis, which often leads to weight loss, greater satiety and improved insulin sensitivity and glycemic control.

These beneficial metabolic shifts have been well documented through quality research; even keto skeptics don’t decry them. Where things get controversial is around whether these physiological changes persist long-term, and whether they translate into the real-deal benefits (sustained body fat loss, faster marathon times, longer life) that keto devotees expect.

State of the science

Although data from human clinical trials suggests promise from the ketogenic diet for people with specific health conditions, including obesity, type II diabetes, cancer, cognitive decline, epilepsy and non-alcoholic fatty liver disease, these results don’t necesarily extrapolate to the broader population. And while some studies looking at potential athletic-performance benefits have shown promise as well—particularly around fuel-burning and energy expenditure in ketosis—the data have been mixed, and many of the study designs are far from gold standard.

“The most important thing to put in perspective is it’s really difficult for people on the ketogenic diet to control and record accurately what they eat,” says Anthony Almada, founder and president of IMAGINutrition Inc. “In every single keto study that has been done—except for one—participants were instructed how to eat but not given meals to take home. This means they could cheat and eat whatever they wanted and nobody would know.”

Despite the many unknowns, in this new era of biohacking, celebrity influencers and decriminalizing dietary fat, throngs of consumers are going keto (or at least contemplating it), wooed by the possibilities, especially slimming down and leaning out. “What makes the ketogenic diet so alluring is there is a dramatic initial weight loss,” Almada says. “But this is not fat being removed from the body. You lose a lot of water and muscle because you are not taking in enough carbs, yet the muscles are still working so they burn up all the carbs. That’s why when someone goes back on a higher-carb diet, they can gain three to eight pounds and none of it is fat.”

In the case of athletes, most are looking beyond quick weight loss and to the potential performance gains down the road. They’ll find plenty of support for the ketogenic diet and lifestyle online. There are countless articles and blog posts that oversimplify and oversell the study results, as well as testimonials from keto athletes who swear the diet has upped their game. And, to be fair, they may not be wrong.

“Anecdotally, the ketogenic diet is, at the very least, not any worse than the standard diet for people who want to improve exercise performance, but we don’t know if it is better,” says Justin Robinson, sports dietician and consultant for U.S. military special operations soldiers and founder of Venn Performance Coaching. “If you are an endurance athlete, there are two ways you could potentially benefit from a ketogenic diet. One is decreased body weight or body fat. If you are 10 pounds lighter, you are, in theory, doing less work when running a marathon or competing in a long cycling race.”

The second probable perk is fat adaptation. “This is beneficial because in the first two hours you are burning carbs and fat whereas someone else burns through all of their carbs in first two hours of the race,” Robinson says. “But for sprinters, soccer players and football players, the ketogenic diet is absolutely not appropriate. These are high-intensity intermittent sports for which the body uses mainly carbs for the duration, and then who cares what the body does in hour three.”

For many athletes, the anecdotal evidence is enough to pique their interest. Robinson says he gets asked about it by the soldiers nearly every day, whether or not they actually take the plunge. But among athletes who have signed on—who’ve endured the “low-carb flu” in the first few weeks as their body adjusted and forged ahead with a carefully curated fat-centric diet—a distinct tribalism has emerged, much like we’ve seen with the paleo diet and CrossFit.

“It’s definitely a lifestyle, and if you want to make it stick beyond the initial 30 days, you really have to buy into that lifestyle,” Robinson says. “There’s a lot of passion around it. Many of these people are probably fed up with conventional medicine and dietary guidelines that have been off, so there may be this rebellious aspect, like ‘the dietary guidelines were wrong about fat for 30 years, so let’s do something different.’”

Where there is passion and the potential for life-changing and game-changing results, there are products for sale. No surprise, the multilevel marketing channel, in which personal zeal and commerce are intrinsically intertwined, has taken the lead on peddling supplements to support the ketogenic diet. There are plenty of different products out there, and this is where questions arise.

While exact composition and delivery format vary, most of these supplements, such as those made by Prüvit and Perfect Keto, supply exogenous ketones, a.k.a. precursors to or preformed ketones aimed at raising ketone levels in the blood. In most brands’ products, the exogenous ketones are attached to salts and put into drink mixes—and users need to ingest a ton of sodium to get the ketones, says Almada. Only one company, HVMN, provides ketones via a proprietary D-beta-hydroxybutyrate ester, developed and extensively studied at Oxford University and just launched to the public this year.

The idea behind exogenous ketones is they are an easy way to supply the body with extra fuel. That action alone is mostly legit, especially in the case of HVMN’s GRAS-affirmed D-βHB ester, which has been shown in published studies to raise blood ketone levels higher than salts can. “Ketone salts may raise blood levels of 1 maybe 2 millimoles, whereas HVMN may get them to 4 or 5 millimoles,” Robinson says.

The problem, says Almada, is that few, if any, of the brands using ketone salts have studied their products to prove that they work; they aren’t making their research available, anyway. And he says they often contain propriety ingredients, which, in the case of Prüvit, have neither GRAS nor NDIs on file so “they are flying in the face of regulations.” (Prüvit could not be reached for comment.)

On top of that, exogenous ketone products are often marketed to burn fat, aid in weight loss, sharpen focus and improve sleep—all benefits possibly tied to the ketogenic diet, not to exogenous ketones. “A lot of companies take data from ketogenic diet research and misinterpret it—on purpose—in order to make a claim for their products,” Robinson says. “While truly being in a keto-adaptive state can increase fat utilization, which can make someone burn more fat, it’s unlikely that just taking ketone product has the same effects.” In fact, because they still provide calories, both ketone salts and ketone esters likely have no real effect on body composition, he adds.

Brianna Stubbs, Ph.D., who studied ketone esters at Oxford University and now leads research at HVMN, is also frustrated by companies that conflate the principles of the diet with those of exogenous ketones. “There may be some overlapping benefits, but there are likely some benefits you get only from the diet and others you get only from exogenous ketones,” she says. “You are not going to recapitulate the fat-oxidation effect of the diet with a ketone drink, yet some companies claim ‘drink this and go into a keto state’ or ‘consume this to kick-start fat burning,’ which are simply not the case. On the flip side, a drink can provide ketones for energy at the same time as you have available carbohydrates from a non-keto diet to burn.”

That highlights another major difference between HVMN and other keto-focused companies: HVMN is not intended for keto dieters. Stubbs says it isn’t necessary to follow the painstaking high-fat, super-low-carb meal plan in order to reap the benefits of exogenous ketones—and endurance athletes probably shouldn’t; they need the carbs. “All of the studies we did at Oxford were on athletes on normal diets,” Stubbs says. “Regardless of diet, every single body has the ability to burn ketones.” Her studies on trained cyclists have suggested that having both ketones and carbs as fuel options during the same endurance event, an athlete shouldn’t burn out as fast.

Robinson also doubts that taking exogenous ketones on top of following the ketogenic diet would do an athlete much good. “You are already in a high state of ketosis, so the exogenous ketones won’t boost your blood levels any more,” he says.

Another contentious claim that ketone salt companies make is weight loss. According to Stubbs, they are poaching and misconstruing this notion from research on the ketogenic diet, as well as from her work on ketone ester. “We found that the ketone ester drink can help regulate appetite because levels of the hormone ghrelin were down after using it,” Stubbs says. “However, we were specific in our paper that this effect didn’t necessarily translate to weight loss. We only measured ghrelin; we would’ve had to see if participants actually ate less and if this effect lasted short- or long-term. But the minute that paper was published in Obesity, it was ‘yay, ketone drinks suppress appetite and help with weight loss!’”

Overall, there is plenty of consumer confusion around the ketogenic diet and exogenous ketones and what each can and cannot do. And, of course, there are plenty of marketing companies eager to capitalize. “The language some use is misleading,” Stubbs says. “For instance, Prüvit gets a lot of scientists to speak about ketones broadly at their events, which is fine, but most people who use their products haven’t read the scientific papers and just assume ketones are all in one big bucket.”

Hopefully, these discrepancies will get sorted out in due time, because nobody thinks the keto diet or exogenous ketones are going away anytime soon. “The percentage of people who follow the diet may shrink, but it won’t die out—this is not the South Beach Diet,” Robinson says. “There will still be this hardcore evangelistic group saying this is the best way to eat for long-term health and sports performance.”