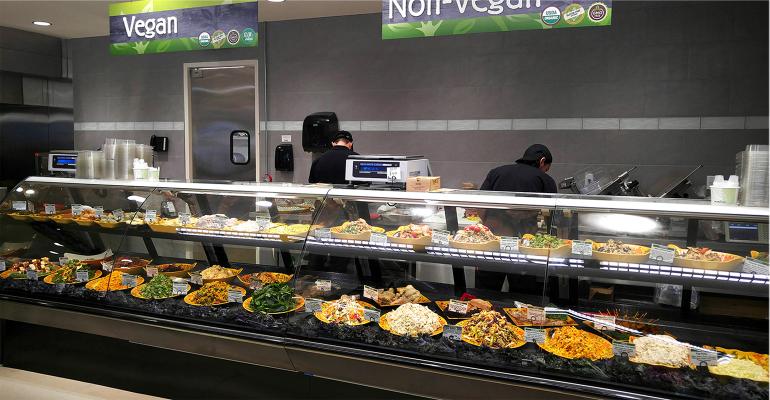 Think convenience retail, and images of a 7-Eleven-style corner store may come to mind.

But recently, consumer demand for convenience has been reshaping natural products sales and sales floor layouts across the country. No cigarettes, lottery tickets or Slurpees here. Instead, think kombucha slushies and $5 harvest bowls with barley, pumpkin, cranberries and chopped turkey.

From the smallest of beverage cases to sophisticated foodservice operations, convenience is not only bringing new customers into natural products stores—it’s also helping to drive sales in a significant way. The beauty of it? It’s not a one-size-fits-all proposition.

“There are two major ways you can define convenience in a grocery store: convenient products in the store and convenient ways to get products,” says Katie Paul, vice president of category management and growth solutions at KeHE. “There is grab’n’go, ready-to-eat and no or minimal prep time, along with rebranding, reformulating or rethinking packaging to make products more convenient for consumers. There are also convenient methods to get products, such as click-and-collect and home delivery.”

With both the number of shopping trips per person and the number of different retailers a household shops continuing to increase, what’s driving convenience? “We are in a culture of time starvation and time-starved eating,” Paul says.

With both parents working in close to half of all two-parent families, according to a 2015 Pew study, more than half of working parents say balancing work and family is a challenge. It’s not so surprising then that homemade meals—breakfast, dinner or lunch—either take a shortcut or get left off the to-do list altogether. Hence the explosion of grab’n’go everything: easy-to-heat, ready-to-eat oatmeal; just-add-water quinoa cups; quick-and-easy muffins. Even the explosion of simmer sauces offers convenience. Anything, Paul says, that makes the cooking experience easier fills the plate.

“It’s almost like speed scratch cooking,” says Paul, noting that simmer sauces sell really well because consumers want the flavor profiles and convenience along with something they can accomplish. They also seek fresh and quality products. “Consumers are looking for less-processed food, which offers up a really good opportunity for brick-and-mortar retailers,” she adds. “I think consumers are becoming more willing to pay for convenience and quality. Younger consumers and millennials are getting married later in life, starting families later, making money now, so they are increasing their wallet and share of what they can put toward convenient and healthier options.”

Fresh in the form of foodservice has been a key way for brick-and-mortar retailers to counter growing online food sales. While online works well for nonperishables, it has yet to win over consumers on the fresh front. Online just can’t follow through when a consumer wants what she wants and needs to get dinner on the table now. While most stores have offered the roasted chicken, deli sandwich or pizza foodservice options for decades, foodservice now runs the gamut from on-the-run snacks to sit-down meals.

At 4th Generation Organic Market and Café in South Florida, customers find a fresh juice bar, a coffee bar and grab’n’go cases in addition to hot breakfast, lunch and dinner and desserts—all organic. The majority of offerings are also vegan and gluten free; some are raw; and everything is made from scratch. Think veggie burgers, eggless egg salad, buffalo tempeh or raw enchiladas along with avocado and chia puddings. “We can cater to any diet,” says Richard Lewis, 4th Generation’s general manager.

Foodservice accounts for more than 50 percent of sales at the store. And while 4th Generation has always offered foodservice, Lewis says it has made a concerted effort to come up with new items and make it more exciting. “Looking at the Amazons of the world and in this environment, you have to build a niche, and foodservice is that niche we had to build that keeps us alive,” he says. “In traditional grocery, it is hard to be competitive. We have every competitive item, but no one does foodservice like us.”

In Durham, North Carolina, Leila Nesson Wolfrum, general manager at the Durham Co-op Market, has focused on convenience and built community around the store while also changing some of the rhetoric about natural food stores being expensive. “We try to be as affordable as we can as a natural foods store, but natural foods stores in general have a reputation of being high priced and exclusive,” she says. “We wanted to make sure we were welcoming to the whole community.”

To start, the co-op introduced $3 dinners on Thursday nights. The dinners offer a convenient night without cooking, although they aren’t necessarily so convenient to attend because they routinely draw 500 to 700 people each week. However, “We see a significant bump in sales Thursday nights in single beers, other beverages and ice cream bars, things people eating dinner also buy,” Nesson Wolfram says.

The dinners led to the $5 lunch special, which is more of a grab’n’go offering. “That is designed for ‘I only have half an hour and I need to zip out and get something,’” she explains. “We want it to be comparable to the time it takes to go for fast food, but an opportunity to grab a meal that is healthy and actually cooked as opposed to a foil-wrapped-burger experience.”

Because of the dinners and lunches, “We have had people on social media recommending the co-op as affordable, friendly and fun, words that are energetic,” Nesson Wolfrum says. Recognizing convenience as a growth area, the market has continued to look for ways to innovate in this area. For instance, it just rolled out a hot, take-home dinner. “We have always done chicken but just started doing stromboli, basically a rolled-up pizza,” she adds. “We do meat and vegan ones, family size for $8.99. Put it next to a salad, and you have dinner.” 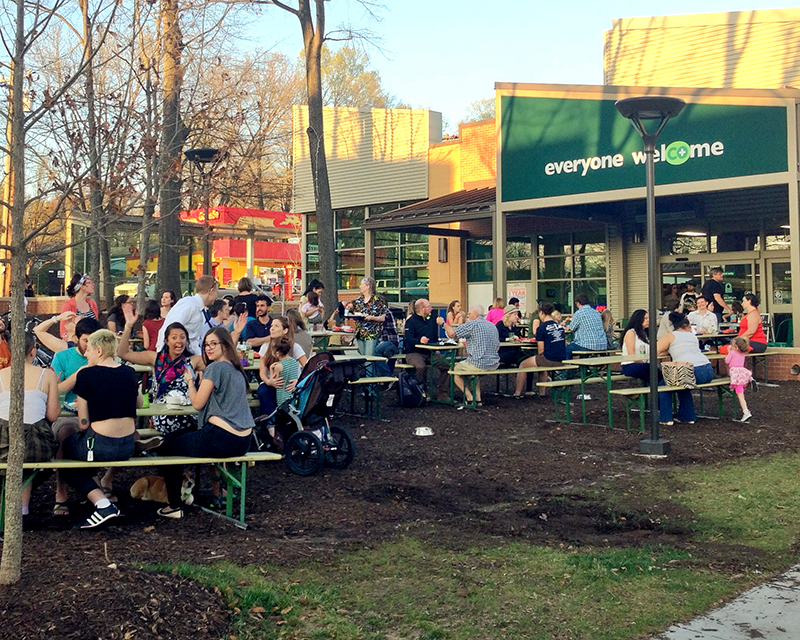 Convenience translates across Durham Co-op Market. For example, the store noticed that many customers didn’t want to spend the time needed to order sliced turkey or ham and then wait and watch it get cut, so deli staff started to precut meats. “We sell four times as much by cutting ahead of time,” Nesson Wolfrum says. “We got a vacuum sealer, and it is clear the packets are fresh and hand-cut. But it means the staff doesn’t have to stop what they are doing and the customer can grab what they need and keep moving.”

As a result, sales of peripheral items like sliced cheese, prosciutto, salami and mixed deli packs are also up. “Prosciutto might be hard for people to order, but [putting it] in a deli pack on a tray with other items is a great way to introduce things customers might find intimidating,” she adds.

Cross-merchandising and offering extra bits of information can also enhance convenience. “People who are invested in coming to the grocery store and picking out their food want information to be as accessible as possible,” Nesson Wolfrum says. “We put up recipes or cooking tips and cross-merchandise: spice packets or mulling spices with apple cider, bananas hanging in the cereal aisle, shredded cheese next to tomatoes or whatever things people might want to buy at the same time.” 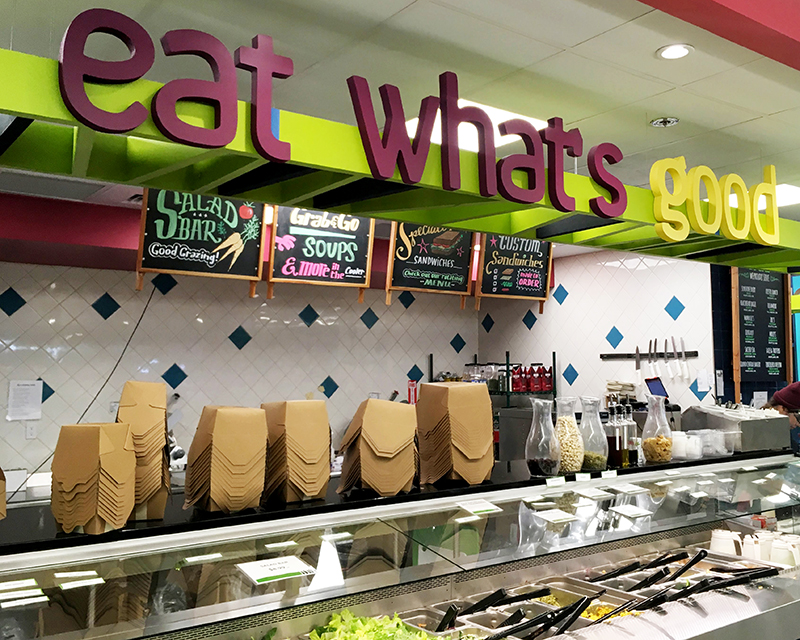 On the other side of the country in Oregon, convenience plays a critical role in Lisa Sedlar’s efforts to rethink typical natural products and convenience stores with the launch of Green Zebra Market, small-footprint stores aimed to serve communities where big stores don’t fit. Sedlar, who started her career at Whole Foods Market and then served as the CEO of New Seasons Market, opened her first Green Zebra Market in Portland in 2013. Now with three locations and a fourth set to open in mid-2019, she is setting her sights on launching seven to 10 new stores in Seattle, Washington, and Los Angeles, California.

With traditional grocery store food sales at a standstill, notching 1.1 percent growth in 2017 and losing sales to online and convenience stores, the C-store channel is one of the only channels that continues to grow in grocery food products.

“It has grown throughout the recession and beyond while big-format grocery continues to decrease in sales,” Sedlar says. “People are voting with their dollars.”

Green Zebra’s overall mission, she adds, is to redefine what it means to be a convenience store in America. “We don’t sell cigarettes and lottery tickets, and the majority of our sales don’t come from things that are unhealthy,” Sedlar says. “We are offering the opportunity for people to ‘healthy up’ their day. It’s the mashup of healthy and convenient. People don’t have time to spend an hour driving to the big grocery store. [To reach] us, it’s a 5-minute trip. Two of our four stores don’t have parking, so it’s about walking and biking to our store. We are an urban-density model.”

Green Zebra maintains a grocery component, yet approximately 25 percent of sales come from foodservice—the salad bar, freshly made sandwiches, soups and grab ’n’ go—which includes a lot of vegan food and plant-based proteins. A public microwave allows customers to heat up frozen items on the spot. With millennials fueling the demand for healthy, quick meals, Sedlar says customers have described Green Zebra stores like their own personal pantry. “They come in and buy two or three things, so they don’t have to stock up their pantry because they shop by meal,” she says. “At the end of the day, who wants to go home and cook a big meal? People are working out, going to school and don’t want to spend a lot of time cooking.”

While Sedlar’s model fits the trend of what is happening in natural products stores, she is also on trend with what is happening in convenience stores. The National Association of Convenience Stores reported increased growth in foodservice, desire for healthier and/or functional beverage options and demand for healthier snacking options in 2017. Healthier snack sales were driven by protein- and energy-rich items and, for the second year, reached the NACS top 10 in-store merchandise categories. This trend is associated with millennials moving toward snacking and away from traditional meals.

KeHE’s Paul agrees that snacking is on the rise and helping to drive convenience sales. Fifty-five percent of eating occasions are now considered snacks, she says, which creates retail opportunities, especially around the perimeter of the store, for impulsive points of interruption that are grab’n’go and snacking focused.

“These are often dried fruits and nuts, vegetables, chickpeas and lentils, and alternative snack formats,” Paul says. “Better-for-you snacks and alternative base snacks are making a difference in displays and points of interruption.”

Beverages, too, are driving incremental sales to the basket. “Consumers aren’t consuming as much sugar, so low-sugar or alternatively sweetened drinks are driving growth, such as functional beverages, cold-pressed juices and soups, ready-to-drink coffees and kombucha,” Paul says. “Some shelf-stable products are even making their way into the cooler or requesting to be there because they realize these purchases are impulsive and increase the basket size.”

In addition to the beverage cooler and coffee bar, Green Zebra sells kombucha on tap, as well as CBD soda and cold brew. On the beverage front, Sedlar says the healthier items become a point of discussion in store aisles. “Two of our stores are in business districts, and a lot of people come down from the office and get a sandwich or something from the salad bar and they’ll ask ‘What is this kombucha stuff?’” she says, adding that many times, these shoppers will try the kombucha.

“We are not trying to be the food police; we are just offering healthy choices,” Sedlar says. As for the Slurpee option? Frozen kombucha, of course.