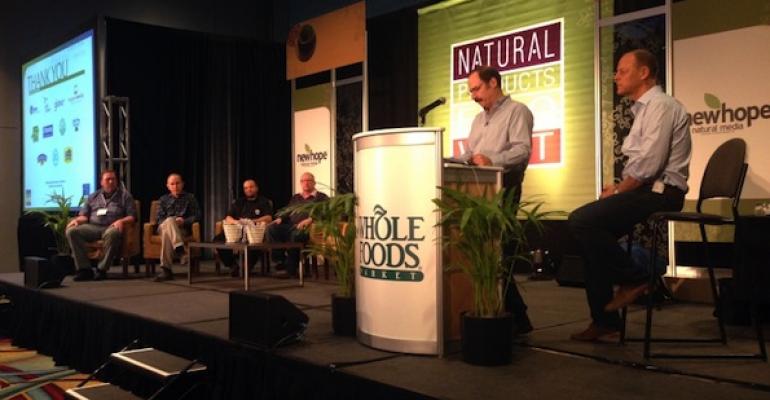 Whole Foods&#39; recent announcement to label GMOs excited the natural industry. How will the initiative affect the Non-GMO Project, and what can we expect from manufacturers?

By now, most enterprises involved in the natural products industry are well aware of Whole Foods Market's recent announcement to label GMO-containing products. “We are committed to full GMO transparency within five years,” said Walter Robb, co-CEO of Whole Foods Market, shortly after his announcement at Natural Products Expo West. “Working together with our suppliers, which we are going to need to do, every product that does contain GMOs or may contain GMOs will be labeled as such. It’s a big step up for the customer’s right to know.”

Most organic companies and institutions support the initiative. Shortly after the announcement, the Independent Natural Food Retailers Association (INFRA) applauded Whole Foods. “For a number of years, many INFRA members have taken the lead on the GMO issue,” said Jimbo Someck, owner of Jimbos…Naturally!, a California-based retailer, in a statement. “Whole Foods’ announcement is tremendously exciting as their visibility and overall purchasing power will hopefully be what the industry needs to reach the critical mass necessary to have products that contain GMOs labeled as such! This is exactly what we need to move the labeling of GMOs initiative forward.”

Likewise, the Just Label It campaign—an organization spearheading support for federally mandated GE labeling—praised Whole Foods for its plan. “Whole Foods is doing the right thing for consumers by giving them more information about what is in their food,” said Gary Hirshberg, chairman of Stonyfield Farm and board chair of Organic Voices (a sister organization).

Obviously the labeling news is very new, so the intricacies of how Whole Foods will label GMO-containing products aren’t fully materialized. But natural companies being sold in Whole Foods may have one of three options: transition into USDA Organic, obtain the Non-GMO Project Verified label or get slapped with a GMO warning.

While the USDA Organic definition excludes GMO ingredients, the certification is based on a process-by-process model. If farmers take the required steps to prevent GMO contamination—such as implementing “buffer zones” next to GMO fields, delayed or early planting to obtain different flowering times for organic and GMO crops, and using properly cleaned farm equipment—theoretically, testing is not needed. But complex supply chains and the ubiquity of GMO farming increases the possibility of contamination, hence the value of the Non-GMO Project’s Verification.

Some manufacturers whose products don’t contain high-risk GMO ingredients—corn, canola, soy, sugarbeets, alfalfa or cotton—are opting for the Non-GMO Project Verification. “Even products that seemingly have low risk ingredients often have ingredients that have risk,” explains Pineau. “It’s surprising where GMOs can pop up, and it’s changing all the time.”

For example, substances like natural or artificial flavors, asorbic acid, xanthan gum, sugars from beets and corn, or maltodextrin can be derived from GMO ingredients.

It’s unclear whether Whole Foods will run all of the products it sells through GMO testing. Indeed, for a retailer dedicated to selling locally produced items, doing so seems like a monumental task. But what types of reverberations from Whole Foods' announcement can we expect?

The Non-GMO Project anticipates more companies will seek verification. “We’ve been growing steadily over the past couple years. And we’ve seen significant increase in the amount of inquiries since the end of 2012,” says Pineau. “A lot of this interest has to do with the impacts of the Right to Know movement, efforts from the Just Label It campaign, state initiatives and increased outreach and education from Non-GMO Project Verified companies.” From these non-GMO organizations and education efforts, consumer awareness skyrocketed.

A January 2013 survey conducted for the Organic Trade Association revealed that families, particularly Millennial parents aged 18 through 24, were notably more aware of GMOs. In fact, 22 percent of parents claim that their primary reason for buying organic foods is to avoid GMOs—up from 17 percent in 2011. Plus, 32 percent of parents who learned about GMOs in the news were significantly more likely to increase their organic purchases. These percentages are sure to spike, given that GMOs have been in the news more than ever.

Most recently, activists are up in arms over a section in a bill called HR 933, a short-term resolution to avoid a government shutdown, signed by President Obama (It will be valid for six months). Specifically, section 735 of the bill “would limit judges to stop Monsanto or the farmers it sells genetically modified seeds from growing or harvesting those crops even if courts find evidence of potential health risks,” according to an article by the New York Daily News.

Dubbed the “Monsanto Protection Act”, advocates are most upset over the blatant collaboration with biotech industry on the bill.

“Why is this such a big deal? The court system is often our last hope, with Congress, the White House and regulatory agencies deep inside industry’s pocket. Several legal challenges have resulted in court decisions overturning USDA’s approval of new GMO crops, for example, sugar beets,” wrote public health lawyer Michele Simon on her blog, Appetite for Profit.

It's clear that GMOs, which were once a fringe and esoteric topic, are starting to have concrete connection with consumers, even those outside of the natural channel. Whole Foods' plan to label GMOs by 2018, while an odd product-selling method—where else can you find a retailer that voluntarily warns the products it sells could be harmful?—will ultimately bolster shopper transparency.

"We're here to be a resource. A resource for consumers who want to better understand GMOs and certainly a resource for manufacturers. We will consistently work with retailers. Our relationship with Whole Foods is reflective of that," adds Pineau.

In what ways do you think Whole Foods will transform the way manufacturers certify their products? Share in the comments below!