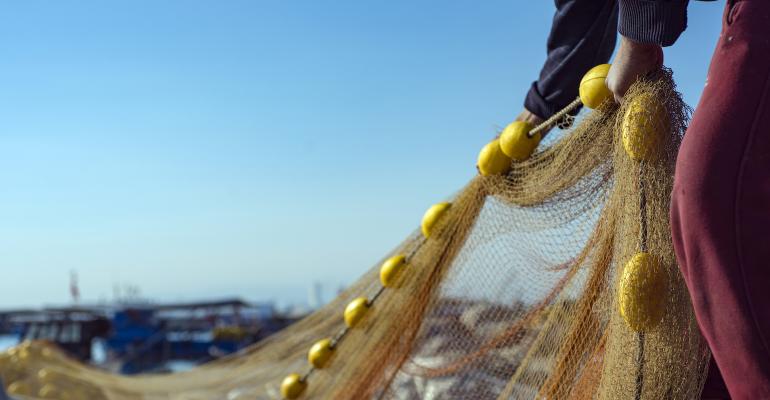 The one exception? Currently, USDA Organic regulations do not include seafood.

George Lockwood, author of Aquaculture: Will It Rise To Its Potential To Feed The World? (Blurb, 2017) and former chair of the USDA's Aquaculture Working Group, has been trying to change this for nearly 20 years—ever since the USDA established the National Organic Program in 2001—and he’s on the precipice of succeeding.

For nearly 10 years, however, the organic aquaculture guidelines were stalled in regulatory limbo—delayed by political agendas and sluggish rule-making processes—until finally, in December 2016, just days before the inauguration of President Donald Trump, the Office of Management and Budget instructed the USDA to proceed with posting the guidelines on the Federal Register for a 90-day public review.

But that never happened.

“There was a new administration, and it’s no secret that things have been chaotic,” Lockwood says. “But this is a good rule. This is a rule that's going to create jobs and bring aquaculture production back to the United States for species that can be organically certified.” Currently, the organic standards proposed by the Aquaculture Working Group and accepted by the NOP are primed to move from the “inactive” list to the “active” list on the regulatory agenda. But Lockwood fears the standards will remain in governmental purgatory because the USDA believes it’s not priority.

Suppliers, retailers, manufacturers and consumers alike would benefit from an organic seafood regulation.

“Our brand sells the most sustainably farmed seafood in the world, which embodies the values and standards of organic and yet gets none of the benefit of an organic label,” says Jacqueline Claudia, co-founder and CEO of LoveTheWild, a frozen seafood brand that sources traceable, consciously raised fish. “Without an easily understandable and recognizable label like organic, it's hard to communicate the quality and sustainability of our product in an easily understandable way.”

Consumers are increasingly seeking out the USDA Organic seal in myriad food categories. According to the Organic Trade Association, the $15.6 billion fruits and vegetables category is the largest of the organic food segments. In 2017, the meat and poultry category was faster growing and skyrocketed an estimated 18.3 percent in one year. This indicates that U.S. shoppers are increasingly interested in choosing protein that carries the weight of the USDA Organic seal. “Although there continues to be competition in organic meat and poultry from ‘natural,’ ‘antibiotic-free,’ ‘hormone-free’ and even ‘grass-fed’ products, consumers are slowly realizing there is a difference between natural and organic,” says a 2017 Organic Industry Survey from the OTA.

In the absence of U.S. organic seafood regulations, conscious retailers are forced to source organic fish and mollusks from governments that do certify seafood. Wegmans, for example, the East Coast supermarket chain with 95 store locations, has one of the best sustainable seafood programs in the country and must source its organic farm-raised seafood such as shrimp and salmon from the E.U., and organic mussels from Canada. Lockwood says that until USDA Organic seafood regulations are passed, organic certifications from other countries are allowed to appear at retail.

For Paul White, VP of fresh merchandise at Lucky's Market, organic seafood would empower consumers by offering choice and transparency. "We seek to provide our customers with choices. Organic certification has become trusted by U.S. consumers who equate organic with cleaner, healthier food,"he says. "Even if consumers don’t know all the details that go into organic certification, they still understand organic is good. Having a USDA Organic seafood certification would be beneficial, as it would allow for more options and greater transparency, providing our customers with more choices to meet their individual needs."

Organic certification has experienced ample gains over the past decade. Sales of organic food fetched an impressive $47 billion in the U.S. in 2016. But education about the seal still remains a priority for the OTA. Many consumers still don’t understand the vast benefits that USDA Organic products offer, such as improved taste, fewer pesticides and better environmental footprint. Muddying the waters with certification from other countries that often have differing standards can perplex even the most dedicated shoppers.

“The proposed organic standard is one of the most stringent in the world. I believe it would give consumers confidence to try great farmed seafood, and go a long way towards dispelling the confusion around aquaculture done right,” says Claudia. “This standard would be a meaningful step towards helping improve the health of our consumers, our planet and our fish.”

What’s the best way to usher in an organic seafood regulation? “Write to Secretary of Agriculture Sonny Perdue requesting that the proposed final rule for organic aquaculture be published immediately without delay,” Lockwood recommends. “Let the secretary know that you care.”