HomeNewsRegulatorySupplement Labeling Act reintroduced in Senate
Recent
Latest
4 tips to get ahead of chemical concerns in packaging
May 20, 2022
7 CBD favorites in the increasingly popular gummies format
May 20, 2022
Mission MightyMe helps parents introduce allergens to babies
May 20, 2022
UNFI's Eric Dorne to step down as chief operating officer
May 20, 2022
Trending
Whole Foods' honors 30 companies with 10th annual Supplier Awards
May 18, 2022
Sponsored Content
The rise of sustainable business – eGuide
Sponsored Content
Getting ready for 2023: Trends for brands to consider
May 17, 2022
Sponsored Content
Unboxed: 7 plant-forward ice creams to stock this summer
May 10, 2022 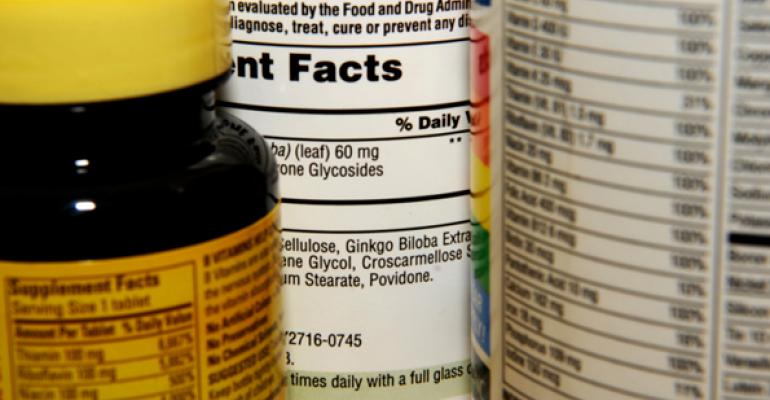 The Natural Products Association believes the proposal creates regulatory redundancy for an agency (the FDA) already stretched to the limit with its resources.

Sen. Dick Durbin, D-Ill, and Sen. Richard Blumenthal, D-Conn., reintroduced the Dietary Supplement Labeling Act of 2013. News that the bill would be reintroduced first came out in late July.

John Shaw, executive director and CEO of the Natural Products Association, has sent an alert to industry insiders warning that the legislation will create redundant regulations for the dietary supplement industry. “It would also lead to more bureaucracy for the Food and Drug Administration (FDA), an agency with existing limited resources, while failing to produce safer products,” Shaw said.

Provisions in the bill would require:

“The NPA supports the federal government's efforts to rid the market of unlawful products; we feel strongly that this legislation would impose additional regulations on the legitimate dietary supplement industry, which the FDA has said repeatedly it has all the tools its needs to regulate,” Shaw said.

The NPA encourages everyone in the industry to contact their local state representatives and weigh in on the issue. To find contact information for your reps, visit: representative or senator web pages.

Food industry guru Lauren Isrealsen calls the timing of Durbin’s announcement “interesting,” since it comes on the heels of the release of a report he requested from the General Accounting Office on FDA’s handling of adverse event reports (AER) associated with dietary supplements.

The GAO report found from 2008–2011, 6,307 AERs were reported. An additional 1,000 AERs were submitted outside proper channels through poison control centers. Compared to the million of servings of dietary supplements consumed during this period, the AER figure can be seen as quite miniscule, Israelson told FoodNavigator.com. When you do the math, there were 488 times as many adverse events reported from prescription drugs as from dietary supplements.

Consumers Union, the policy and advocacy arm of Consumer Reports, voiced what appears to be a minority viewpoint, endorsing the Dietary Supplement Labeling Act of 2013.

"This bill would mean stronger requirements for manufacturers to deliver safe products and better labels with more information for consumers," said Ami Gadhia, senior policy counsel for Consumers Union in a release that goes on to say that of particular concern to this group is the blurred distinction between “dietary supplements” and “conventional foods.” Said blurriness has allowed many food and beverage manufacturers to classify their products as “dietary supplements.”

"Drugs and vaccines are the real danger"

Dietary supplement giant Dr. Mercola also had a negative reaction to Durbin’s proposal. “Sen. Durbin has been on a mission that appears, at least superficially, to stem from concern over ‘your health.’ However, when scrutinized more closely, Durbin’s proposed legislation would have precisely the opposite effect.

“If Sen. Durbin is genuinely concerned about ‘your health,’ then his focus should be on making drugs and vaccines safer, which are the real danger—not dietary supplements,” Dr. Mercola said on his website.

Durbin first introduced the Dietary Supplement Labeling Act (S 1310) in 2011, a bill that threatens the supplement industry by granting FDA more power to regulate supplements as if they were drugs.