HomeNewsRegulatoryWhat mattered in FDA’s 'old dietary ingredient' discussion
Recent
Latest
Innovation at Milkadamia is a weekly exercise
May 27, 2022
Sponsored Content
Are there potential carcinogens swimming in your biobased laundry detergent? – article
Rowdy Mermaid disrupts functional beverages with science-based innovation
May 26, 2022
Monitor: Environmental claims confuse consumers—even natural shoppers
May 26, 2022
Trending
Getting ready for 2023: Trends for brands to consider
May 17, 2022
Natural beauty market trends
Jun 16, 2021
The Planting Hope Company aims to prove gender equity leads to success
May 23, 2022
Podcast: What brands need to get on shelf at Fresh Thyme Market
May 24, 2022 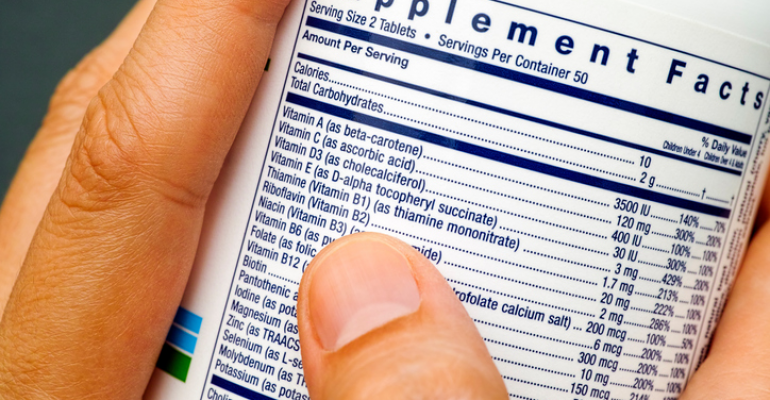 Here's what supplement trade groups took away from a discussion on “old dietary ingredients” that could be exempt from the FDA’s New Dietary Ingredient requirements.

A year ago, the supplement industry was abuzz with concerns that the newest FDA New Dietary Ingredient guidance, released in August 2016, was going to burden brands and manufacturers with requirements that could derail commerce in dietary supplements. Last week, regulators and representatives met to discuss one of the more conspicuous stumbling points in the guidance: which ingredients would qualify as "old dietary ingredients" and be exempt from the new rules.

And while the level of concern about NDI requirements and enforcement has declined considerably in a perceived “post-regulatory” Trump administration era, there is still much at stake in deciding the list of ingredients marketed before the landmark legislation’s passage in 1994 that would be exempt from NDI scrutiny.

The all-day meeting was held Oct. 3 at the FDA’s Center for Food Safety and Applied Nutrition, and the takeaway from supplement industry representatives in attendance was that nobody should expect an ODI list any time soon.

We asked leaders of principal trade organization to share their observations.

CRN thought the public meeting moved the issue forward and provided FDA with useful insights about how to create its official list. A few items that stood out for me were the suggestion (by CRN) that FDA consider a list of ingredients that do not require notification, as opposed to limiting itself to only "pre-DHSEA dietary ingredients." This list would include ingredients in the food supply and ingredients that have already been successfully noticed by the FDA. It would seem to be a more useful list so that companies could simply check against it when determining whether a particular ingredient needs an NDI notification to go to market.

I think FDA also received a couple of important reminders that its allowable evidence for demonstrating that a product was in the market before 1994 must include a broad range of sources (maybe some unconventional ones). It should consider that not all these documents will get into detail about the form and processing of particular ingredients, but that the agency should broadly interpret them to include, for example, various salts and extracts. Lastly, I thought multiple speakers stressed that this is not a safety evaluation—it’s a market determination, and so, while safety absolutely plays an important part of bringing a product to market, the agency should be clear that other statutory authorities address safety, but it’s not appropriate to evaluate safety in this context.

The topics on the table were clear enough. What evidence, and by what process, can we establish recognized pre-DSHEA status? From there, the realities became all too clear. Twenty-three years post-DSHEA is not an optimum time to be figuring this out. While commercial documents showing the marketing of a DS or DI prior to October 15, 1994, still exist (fewer every year), production and manufacturing records are as rare as an "I voted for Richard Nixon" bumper sticker. Even if the standard and process are agreed on by all sides, absent an understanding of FDA's intentions regarding chemical alteration and manufacturing changes, a large-scale effort to catalog ODIs seems to be an uncertain exercise.

Is this a long road to a small house at this point?

The public meeting also revealed the long-standing and sharply opposed views of the consumer advocacy community that represented three of the final five speakers. The underlying message remains the opaqueness of not only the NDI/ODI process but the GRAS affirmation system as well. Several times the request was made not to call the ODI list a "safe harbor" because ODIs are not "demonstrated to be safe." The specter of ephedra and bulk powdered caffeine were raised as evidence of how a porous ODI list ill serves consumers. Robust debate followed. Old disagreements remain, perhaps even deepened, following this meeting.

Ultimately, all sides—FDA, industry and advocacy groups—want action, and certainty on an ODI list, but sure-footed next steps are not yet at hand.

A significant difference in views between consumer and industry representatives was apparent. The former expressed concerns that consumers would misunderstand any official list of old dietary ingredients to mean all listed articles had been proven to be safe, even though FDA’s proposal is to create a historical record, and the safety provisions of the law requires all supplement marketers to market only products that are reasonably expected to be safe—whether using old or new ingredients. In contrast, most trade associations expressed at least guarded support for an official list of ODIs, though AHPA communicated its support as conditional on the agency’s strict adherence to the letter and spirit of DSHEA, and pushed for FDA to identify all ingredients likely to have been marketed in 1994 instead of insisting on absolute proof 23 years later.