What you need to know about the Dairy Pride Act 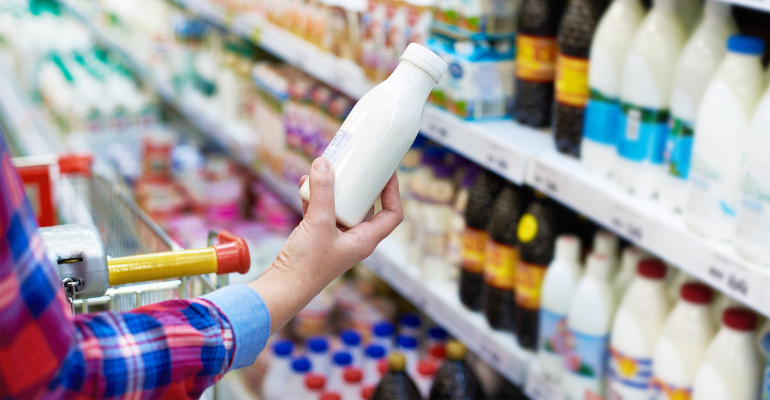 Proposed legislation could change how plant-based milk, cheese and yogurt are marketed.

The triangular cheesehead hats give it away: With 12 billion pounds made in 2016, Wisconsin is the most prolific producer of cheese in the United States. That’s 26.2 percent of all the cheese made in America, according to the Wisconsin Milk Marketing Board. Combined with butter, milk and yogurt, Wisconsin’s dairy industry brought in $43.4 billion in 2016, making dairy more fiscally important to the state than potatoes are to Idaho or citrus is to Florida. It’s clear the dairy industry is vital to Wisconsin’s economy, and many people rely on strong dairy sales for their livelihood.

Perhaps this is why, earlier this year, Sen, Tammy Baldwin, a Democrat from Wisconsin, penned the Dairy Pride Act (technically called Defending Against Imitations and Replacements of Yogurt, Milk and Cheese To Promote Regular Intake of Dairy Everyday Act), a piece of legislation that would prohibit plant-based milk, cheese and yogurt alternatives from using any of these terms on their product packaging. “Imitation products have gotten away with using dairy’s good name for their own benefit, which is against the law and must be enforced," Baldwin said in a statement. "Mislabeling of plant-based products as ‘milk’ hurts our dairy farmers."

Supporters of the Dairy Pride Act argue that using the terms milk, cheese or yogurt on a product such as almond milk or flax milk deceives consumers into thinking the nutrition of plant-based milk is equivalent to cow’s milk, and in some cases, misleads shoppers about what they are buying.

A slew of representatives from top dairy-producing states support the bill, including Rep. Peter Welch, a Democrat from Vermont. The argument rests upon the FDA's failure to uphold its definition of milk. “The FDA regulation defines milk very specifically as a product that comes from a mammary gland. So we’re asking the FDA basically to enforce it’s own regulation,” Welch told NPR in 2016. The FDA says, “Milk is the lacteal secretion, practically free from colostrum, obtained by the complete milking of one or more healthy cows.”

Obviously, plant-based milks do not fall within this governmental definition.

For almost as long as plant-based milks have been available for purchase, the dairy industry and plant-based manufacturers have disagreed about labeling conventions. Soymilk has been available for centuries (some sources say it was invented in the year A.D. 82). In 2000, the Soyfoods Association of North America was involved in a scuffle with the National Milk Producers Federation about this very same issue—NMPF asked the FDA to enforce the definition of “milk” as outlined by its own standards. Nancy Chapman, executive director of the Soyfoods Association, sent a response to the FDA arguing that, yes, products that come from the lacteal secretions of cows should be labeled “milk.” But, Chapman wrote, “The NMPF incorrectly extends this initial point by asserting, wrongly, that the definition and standard of identity for 'milk' prevents the word 'milk' from also being used together with additional qualifying language as part of the name for other products that may not be derived from cow’s milk.” Because soymilk had the word “soy” in front of it, in other words, the product does not purport to be ordinary cow’s milk.

FDA refused to provide a clear answer 17 years ago. So why are lawmakers from dairy-producing states trying to remove the word “milk” from plant-based packaging now? Because U.S. plant-based sales rose 9 percent and cow’s milk sales dropped 7 percent in 2015, according to a Mintel report released in 2016. Cow’s milk sales are projected to drop another 11 percent through 2020.

Plant-based milk is clearly cannibalizing dairy sales—and it’s particularly concerning to organizations like NMPF that plant-based milk is consumed by people who also consume dairy products. It’s not just vegans and those allergic to dairy that buy products like almond milk, soy milk, hemp milk, etc. In fact, a whopping 49 percent of Americans consume plant-based options. “In addition to half of Americans consuming non-dairy milk, our research reveals that nearly all non-dairy milk drinkers also drink dairy milk, revealing that consumers are turning to non-dairy out of preference as opposed to necessity,” said Elizabeth Sisel, beverage analyst at Mintel, in a report.

Certainly, part of this phenomenon is due to the plethora of delicious, high-quality plant-based milk options available in the natural marketplace that mimic cow’s milk and, in many cases, deliver superior flavor. Companies such as Califia Farms, Blue Diamond and Silk are closely tuned to consumer desires, too, and can nimbly offer cleaner, more sustainable choices. For example, when Califia Farms first launched, some of their products contained carrageenan, a Generally Recognized As Safe ingredient derived from seaweed. But when consumers voiced concerns about carrageenan as a contributor to gastrointestinal distress, Califia listened, and removed the ingredient from all of its products. More recently, the company launched a line of additive-free, USDA Organic plant-based milks that contain just nuts, oats, sea salt and coconut.

Players in the dairy industry laud Baldwin’s Dairy Pride Act because they believe it would uphold the integrity of cow’s milk and boost sales by building a larger market. But NMPF doesn’t quite seem to understand that consumers are glomming onto plant-based milks not because they actually wanted cow’s milk, got confused and erroneously bought almond milk; it’s because these products are delicious, don’t require animals to be produced, maybe make them feel healthier and are better for the environment. (And don’t even start with the almonds-use-too-much-water argument—compared with raising dairy cows and all of the grain to feed them, almond milk is absolutely a more sustainable choice.)

Dairy farmers are hardworking folks who are passionate about helming humane, sustainable and profitable enterprises. Many dairy farmers run small farms with herds of under 200. Going back to Wisconsin producers, 96 percent of dairy farms in the state are family owned. Plus, the benefits of dairy products shouldn't be underestimated. Yogurt and milk are packed with probiotics, calcium and protein; cheese is a godly alchemy of milk, bacteria, time and art.

But, as Michele Simon, executive director of the Plant Based Foods Association, recently said, “The dairy industry doesn’t own the words ‘milk,’ ‘yogurt’ and ‘cheese.'” Simon, a food policy lawyer, is actively working with a Washington, D.C.-based lobbyist to protect the 89 members of PBFA from the Dairy Pride Act, which would require plant-based milks to define their products along the lines of “almond beverage” or “hemp juice”—monikers that would undoubtedly cause consumer confusion. Simon also formed a committee of nine member companies to discern how best to label plant-based products such as milk and cheese voluntarily. For example, Miyoko’s Kitchen, makers of nut-based cheeses, labels SKUs as “Cultured Nut Product” and distinguishes flavors by using words that evoke ideas of cheese, such as “Rustic Alpine.” It’s a smart solution, but not exactly applicable to other plant-based brands.

Recognizing this potential, at least one longtime dairy, Elmhurst, has shifted business tactics. After over 90 years of being in the dairy business, CEO Henry Schwartz shuttered the dairy and now produces nut milks. Made with just water, nuts (almonds, hazelnuts, walnuts or cashews), cane sugar, salt and natural flavors, Elmurst represents how a legacy brand in a dwindling market can remain relevant and profitable to modern consumers. “As someone who was a part of the dairy industry for so many years, my views on the [Dairy Pride] Act are complicated,” says Schwartz, now in his 80s. “I am proud of how we’ve transitioned to plant-based and pioneered a more wholesome and nutritional nutmilk. Transparency is very important to us, and we are very clear about labeling our products as nut-based. We even call our varieties ‘Milked Almonds,’ ‘Milked Hazelnuts,’ ‘Milked Cashews,’ etc. From conception, our priority with this line has always been to provide a higher quality, more nutritional milk alternative."

Transparency in labeling will always win. Should it pass, the Dairy Pride Act would only confuse those shopping in the rapidly expanding plant-based milk aisle.