With the opening of a new nutrition innovation center in Parsippany, N.J., DSM is boosting its profile for in-house innovation and development service to its customers.

DSM has built a reputation as a company that supports its ingredients with strong science. It has also been known as a cash-rich investor partnering with smaller companies on innovative ingredients or technologies. But now, with the opening of a new nutrition innovation center in Parsippany, N.J., it is boosting its profile for in-house innovation and development service to its customers.

A key element of the new facility is the synergy the company anticipates by housing so many capabilities under one roof. The new center houses development labs for supplements, foods, beverages, savory flavors and personal care products. And besides offering this wide array of capabilities close to hand to the large number of nutrition products companies in the Northeast, it also brings all of those lab folks together, which, the company says, could spur innovation across categories.

"The baker is next to the supplement person and they get to be friends and they go make cool stuff," said Gregory 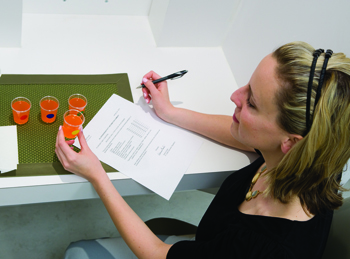 The center is the latest addition to DSM's global community of six networked application laboratories. Housing more than 100 application specialists and technical marketing experts, these facilities provide customers with support wherever they are in the world.

Some global nutrition products companies have recently closed R&D facilities in the U.S. because of cost considerations. As the executive of one such company told Functional Ingredients, three Ph.D.'s can be hired in India for the price of one in North America.

DSM chose to go a different route, gaining in faster-to-market service for their customers what they give up in higher North American salaries. It's a selling point when a representative can say to a customer, "Let's hop down the lab and whip some of this stuff up."

A customer could, for example, test the performance of a new beverage formulation in bottling machine. Or he could see how a proposed new supplement would perform in a tabletting machine in DSM's supplements lab.

The development center also helps with DSM's in-house innovation strategy. One product in the development pipeline is an enzyme to address gluten intolerance, according to Kesel.

DSM also offers turnkey solutions for customers. Two were on display during a recent press event to celebrate the opening of the new center.

The product mockups, complete with labeling, are available to customers as is or as a basis for further development.

"There is probably no company in the world that invests more in new innovation than we do," said Jim Hamilton, president of DSM Nutritional Products.

DSM to acquire Vitatene S.A.U. to expand position in natural carotenoids
May 11, 2011

Brendan Synnott explains how to deliver innovation in a world with no 'secret ingredients'
Mar 16, 2011