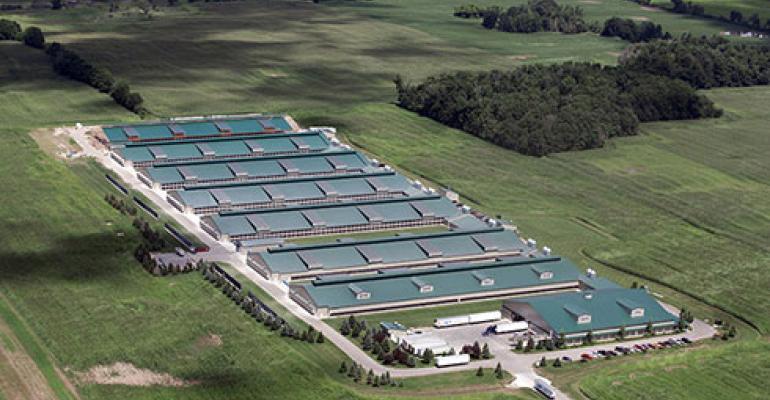 At the Alfalfa’s Market a half mile from the NBJ office, eggs start at $2.99 a dozen. Organic eggs, of course, command a higher price, ranging from Nest Fresh’s $4.99 for a dozen, through Chino Valley Ranchers “Omega-3, soy-free” at $6.99 and Vital Farms “Pasture Verde” at a startling $8.99. With USDA organic standards clearly stipulating specific feed and animal welfare practices, what could account for an 80% price variance across the organic brands?

This is the crux of the investigative work conducted by Wisconsin-based nonprofit Cornucopia Institute who contends that as industrial scale production practices become standard even in the organics industry, the essence of organics gets lost. In 2014, after years of varied investigative processes, Cornucopia contracted aerial photography of large-scale organic dairy and egg producers by random flyovers. The result of their investigation verified their hypothesis: these concentrated animal feeding operations (CAFO’s) showed no evidence of substantive outdoor access for chickens or access to pasture for cows, a key requirement for their organic certification.

The report resulted in formal legal complaints placed to the USDA as well as a story in the Washington Post. In the complaints, Cornucopia named 14 companies for their failure to meet federal standards.

“These abuses have taken place for some time. We did the first iteration of this in 2010,” Cornucopia co-founder and senior farm policy analyst Mark Kastel says, referencing an investigation that included visiting over 15% of the certified egg farms in the United States and surveying all name-brand and private-label industry marketers. “So it wasn’t a secret some of these facilities were not allowing their birds to go outside as the law required and when we filed complaints, they ignored them.”

The 2014 investigation was the first to include flyover photography. “A picture is worth a thousand words,” Kastel says. “We figured this would hold weight with the USDA and would concern the public.”

A picture may be worth a thousand words, but a still photograph is not sufficient evidence of around-the-clock farm activities, argue those cited in the investigation, their certifiers and the USDA. The complaint was closed without investigation beyond contacting relevant certifiers to confirm each farm was in good standing. Following policy, and to protect from frivolous complaints, the USDA “may,” at their discretion, investigate suspected on-farm violations.

Yet, argues Kastel and Cornucopia, the allegation was based additionally on other documentary evidence and, most significantly, upon infrastructure shortcomings. The facilities, they assert, provide neither sufficient outdoor space nor appropriate access to it, and therefore no picture at any time could tell a more favorable story.

Cornucopia persisted. “When we looked at [the regulatory] language we found that that same guidance,” the guidance that ‘may’ trigger an investigation, “said that if [the USDA] received a complaint against a certifier—for which they hold direct supervisory responsibility—they shall investigate.” So, on October 15, 2015 Cornucopia refiled each complaint, this time naming the relevant certifiers.

“Our allegation is that because a lot of these were infrastructure related,” say Kastel, “we would suggest that the certifiers could very well have either been operating incompetently or were co-conspirators in the violations.”

So, an investigation began, as well as an investigation into National Organic Program (NOP) head Miles McEvoy, alleging that he “…has weakened independent oversight of the program to make life easier for large agribusiness firms” (quoted from a Oct. 21, 2015 press release).

“When these corporations exploit consumer goodwill in organics and the USDA doesn’t take the enforcement action, it’s placing ethical competitors at a competitive disadvantage,” says Kastel. “When there are factory farm organic eggs at Walmart, Costco and Target, to compete with that is just grossly unfair.”

Independent of legal action, Cornucopia is on a mission to educate consumers that not all organic eggs are created equal. They’ve compiled a scorecard that ranks 28 criteria detailing practices from average flock size and laying hen lifespan to both indoor and outdoor space per bird and even which organic certifier is used. The survey is self-reported and requires substantiating photographic evidence that Cornucopia claims to verify by satellite image. Egg farms are then scored 0 – 2700 and given a “starred” rating from one egg, based on unsatisfactory or undocumented results, to five eggs, which Kastel calls “beyond organic.” The comprehensive scorecard, he says, “empowers consumers and wholesale buyers to make good, discerning purchasing decisions.”

At the top of the list, with the high score coming in at 2515 is Trout Lake, Washington’s Sunnybrook Farm,  a small farm that raises eggs, beef and pork, “and eventually we want to incorporate permaculture,” says Rebecca Wellman who runs the farm with her husband, Michael Kelly.

“Our goal is to raise the absolute best quality products that we can,” says Wellman. “It’s a process getting there.” Sunnybrook pastures their laying hens and has sought both organic and animal welfare certifications. Wellman says she is not aware of any other U.S. farms that hold both certifications.

“It’s very meaningful for us,” Wellman says about the five egg ranking. “For one, we really do care and it’s nice to be recognized for that. And it makes us want to do even better. There’s always room for improvement.”

On the other end of the scorecard spectrum is Chino Valley Ranchers—purveyors of the $6.99 carton at Alfalfa’s. Their Idalou, Texas contract egg facility was among those named in the Cornucopia allegations. General Manager David Will took NBJ’s call right away.

“From our point of view,” says Will about the Cornucopa investigation, “we were contacted by the NOP, we sent them the records for the ranch that clearly listed the day and dates that they had in question and had signed records from our managers stating which houses at that facility the birds were outside. We were sent a letter from the NOP that there were no further records required … and the matter was closed.”

Will says he’s invited Cornucopia to that ranch and they’ve “never shown up.” (Cornucopia has written that they do not like to do inspections by appointment because inspections with advance warning are unlikely to show the true story.) “I’ll also tell you,” Will continues, “the head of the NOP, Miles McEvoy, has personally toured this ranch long before they sent in anything on it and we’re certified. So he must’ve been happy.”

Chino Valley receives a one egg rating on the Cornucopia scorecard, but not because of practices. Like many on the one-egg end of the spectrum, they have chosen not to fill out the survey. “We’re a solid three egg in their category but we just don’t—our managers and owners choose not to—participate, because of the basis of the way the survey’s done.”

Calling the Cornucopia survey questions “a bit invasive,” Will stated, “we’re not sure why one group should collect info by mail and that be considered gospel. It’s very easy to fill out a form in the mail. That, honestly, is why we invited them to Idalou so they could conduct the survey themselves, so that they could pose their own score.”

NBJ asked: if Cornucopia arrived today, unannounced, would they be granted a tour? “Um…” Will responded slowly, seeming to contemplate the possibility, “yeah. We’d just want to check them for biosecurity, obviously.”

“USDA organic… provides a consistent label for consumers to look for in a very crowded marketplace,” writes Food & Water Watch assistant director Patty Lovera, commenting by email. “And the core standards behind the label are important ones that go beyond a lot of other labels (like non-GMO).”

On the con side, Lovera says that what Cornucopia alleges, “is a good example of what happens when there is pressure to grow the organic sector and how that pressure can impact standards and enforcement.  We don’t think that organic consumers expect large scale industrialized animal operations when they buy organic, so the program needs to deal with animal welfare standards, the origin-of-livestock rule and other standards that would address this.”

“The law is an excellent law,” Kastel agrees, “the intent of Congress was excellent. The regulations are very good and continue to be improved. But we need to follow the spirit and letter of the law.” That means providing animals access to the outdoors, fresh air, sunshine and the ability to “exhibit their natural instinctive behaviors,” he says.

“So, some of the loopholes they’re trying to exploit, the loophole isn’t even in the law. It’s just in the minds of the agribusiness executives and the compliant USDA officials.” On the point of access to the outdoors, Kastel notes there’s no definition of outdoors in the law—a reasonable omission due to a general understanding of the term. Still, Cornucopia’s investigations have revealed small screened areas with concrete floors and a roof, what Kastel calls “screened-in porches,” being defined as the outdoors. And, further, “If 95% or more of the animals in that building cannot fit into that minute space, then 95% of them have no access to the outdoors—even if that was outdoors!”

Organic farming is difficult to do, but it’s not difficult to understand, Kastel contends. “Why do the majority of all organic chicken farmers understand that they have to provide true outdoor access?” It’s a matter of enforcement of standards he calls good, logical and understandable.

“I think the industry should think not just about the standards for organic food,” says FWW’s Lovera, “but also what motivates consumers to seek out organic and what those consumers expect.”

“There is a higher authority on these issues that we’re debating here,” Kastel says. “Higher than the USDA, higher than the courts—and that’s the consumer. They control the dollar, they vote every day for companies they think are ethical.”

“So, if you’re building a business based on values and you are caught to have premeditatedly taken advantage of consumer good will, you will pay a price. It could cost you your business."

For retailers, Kastel plugs his organization’s scorecard as a tool for product selection. “The high integrity retailers in the organic and natural food space are the opinion leaders. So, making sure you earn [consumer] trust and you deserve it, making sure that you make every effort to be accurate in your research and that you’re providing superior options. That is the competitive advantage.”

Noting that there’s always room for fraudulent activities, and acknowledging that the flyovers themselves are “a little controversial,” Sunnybrook Farm’s Wellman says, “I think that organics definitely need a watchdog, so I’m glad [Cornucopia is] serving that purpose.”

For consumers, Wellman rings a familiar bell: If the values truly matter to them, shoppers should do their homework. “I always encourage people to know the farms and know the farmers,” she says. ”We try to be very transparent about what we’re doing, and we know we’re not always perfect.”