Home>Archive
Recent
Latest
Beyond Meat CEO: 'Outcomes are not unexpected'
May 07, 2021
FDA issues procedural notice on potential plans to conduct research about use of 'healthy' symbols on food products
May 07, 2021
How do food co-ops affect their communities?
May 07, 2021
Sprouts sticks to game plan in lapping Q1 pandemic impact
May 07, 2021
Trending
Hain Celestial CEO optimistic as product innovations find shelf space
May 06, 2021
The 11 pitch slam competitors at 2021 Natural Products Expo West Virtual Week
May 03, 2021
Family strategy: How to run a family—and public—business
May 04, 2021
Organic produce shows strength and staying power
May 05, 2021
NBJ
brought to you by 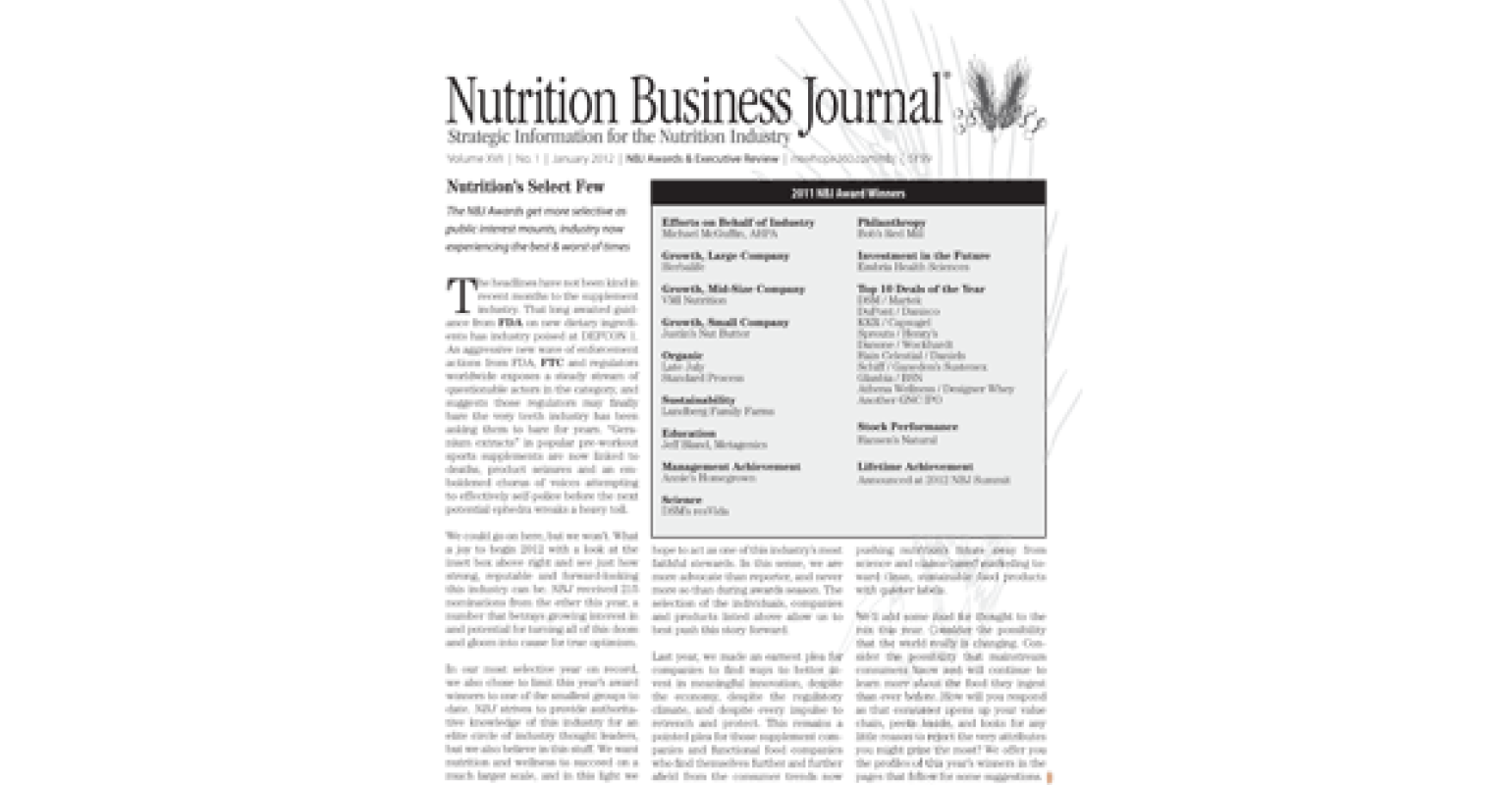 DSM wins NBJ&#39;s 2011 Science Award for its body of evidence on its synthetic resveratrol ingredient, resVida.

In 2003, David Sinclair and his team at Harvard made the groundbreaking discovery that resveratrol could extend the life span of yeast. In 2006, they found similar effects in mice. By 2009, resveratrol was the media’s it supplement, featured in segments with Oprah, Barbara Walters and even the venerable 60 Minutes—even without a single human study. The hype faded and sales momentum slowed, but through thick and thin, Netherlands-based DSM quietly persisted, pursuing scientific evidence for the efficacy and safety of its synthetic resveratrol product, resVida.

“Despite the market dropping for resveratrol about a year and a half ago, they didn’t pull the plug,” says Anthony Almada, president at IMAGINutrition, GENr8 and FEIN Innovations, a trio of nutrition-focused companies. “There was a huge gulf between the promise of resveratrol and the evidence. DSM has closed that gap.”

“Resveratrol was an interesting ingredient, but when we looked at the scientific database, there was a lot of information on fruit flies, fish and mice,” says Reto Rieder, DSM’s senior marketing manager for resVida in the United States. “A lot of major companies were selling 500mg capsules, making all kinds of claims. They could not back up the dosage. They could not provide human studies. If you’re going to launch a new product, it’s our philosophy to have human studies. This allows us to provide structure/ function claims, and gives credibility to the ingredient.”

To that end, the company already had a detailed human-research program in place when it launched resVida in 2009, with one study showing improved flow-mediated dilation, a key marker of vascular health, in obese individuals within an hour of intake. It also had a safety and toxicology study showing that resVida is absorbed in the human bloodstream in a dose-dependent fashion.

Perhaps the most significant study, however, is the research published in November 2011 in the esteemed journal Cell Metabolism. Researchers found that after just 30 days of taking large doses (150 mg daily) of resVida, obese individuals showed numerous signs of metabolic change, from lower fat stores in the liver and lower blood pressure to improved mitochondrial function, mimicking the effects of calorie restriction. Though the study was small—just 11 men participated—the research is unparalleled and has significant implications for treating metabolic syndrome and enhancing healthy aging, according to Almada. “No one has ever done a deep dive into the metabolic effects of resveratrol on this level,” he says. “They really invested in a thorough study that truly explored new frontiers and generated some pioneering results in humans.”

DSM has initiated several additional studies to examine various aspects of metabolism, cardiovascular health, cognitive performance and aging biomarkers after supplementing with resVida. The company has also completed extensive safety assessments, enabling it to self-affirm resVida as Generally Recognized As Safe. “We have a complete tox profile on it, with an upper daily limit,” Rieder notes, a profile which DSM openly publishes and shares with other companies.

From a commercial standpoint, DSM’s commitment has paid off. GNC has discontinued selling a third-party resveratrol product and now exclusively sells resVida. “They actually cite our clinical studies of efficacy on the label,” Rieder says. And achieving GRAS status has enabled resVida—and only resVida—to be used in beverages and bars.

Clearly, part of resVida’s commercial success lies in its patentability, elusive terrain for its naturally-sourced competitors. This comes at a time when the FDA’s guidance on New Dietary Ingredients calls into question whether synthetic botanicals will even be permitted in formulations going forward. Rieder isn’t worried. “If you use any form of chemical alteration, even an extraction, it will be the same argument from FDA,” he says. “This is, of course, a guideline, and there will be ongoing discussions about that.”

Almada says it hardly matters, given that resVida is already GRAS. “Can you put a GRAS ingredient in a dietary supplement? Well heavens to heck, yes. You cannot have a food or beverage with non-GRAS ingredients. resVida can play both sides of the fence. It would be a very challenging stance for FDA to assert that you can’t put this in a dietary supplement because it’s not NDI. It’s GRAS—it’s a higher standard.”

Even more to point is the higher levels of purity possible with synthetics. Japanese knotweed, the source of most natural resveratrol supplements, produces an antifungal compound called emodin. While it’s healthy for the plant, emodin has a laxative effect in humans, Rieder says, which makes the nature-identical version a more appealing option. Much of the available natural resveratrol also tests positive for synthetic anthraquinone, says Rieder. Not only are many consumers opposed to this and other pesticides, but anthraquinone is also banned by California’s Prop 65.

Rieder believes that solid research has always resonated strongly with educated consumers, and that GNC’s switch to a data-backed product bears that out. So too does the fact that resveratrol remains one of the top ingredients in new product launches in dietary supplements. While the media hype may have faded, the industry is finding that responsible research can propel steady, incremental sales—the kind that benefit both companies and consumers in the long haul.