A tale of trust

TAGS: Manufacturer and Brand
Consumer perception is mixed, but it’s still a call to action

But the troubling nature of the results cannot be questioned at all.

NBJ and New Hope Network surveyed 500 people. Among the most troubling responses for supplements was its ranking among various industries and professions. The question was posed as “how trustworthy are the following industries or institutions?”

Supplements did not fare well. 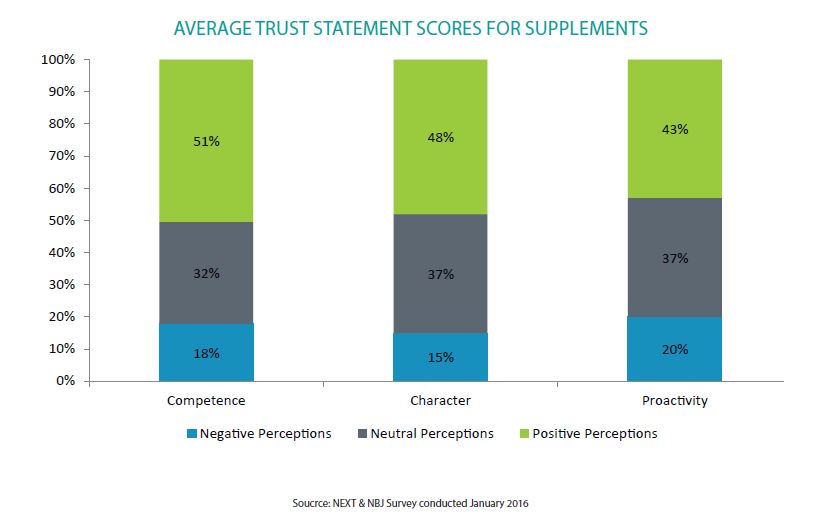 Respondents rated its trustworthiness above only big business and Congress. Only 39 percent rated supplement makers trustworthy or extremely trustworthy. Nobody paying attention would expect supplements to wedge into the upper rungs with police and small business owners, but to see the supplement industry ranked below broadcast news, and more importantly, pharmaceuticals, is troubling indeed.

What it tells Extreme Trust author Martha Rogers is that the industry needs something like a bucket of cold water thrown in its face. It could be just the beginning. Trust was a marketing mission before. With consumers getting access to more information than at any time in history, trust has to be a reality built into every link in the supply chain and every step in the manufacturing process. Fail that test, says Rogers, and “the age of transparency means that (the industry’s trustworthy ranking) will be lower than this sooner or later.” 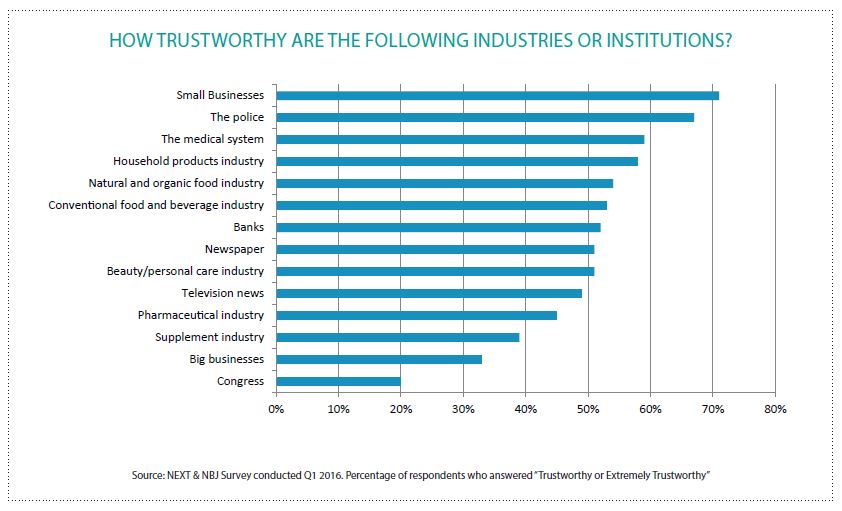 Whatever they look like, they suggest urgency to GNC CEO Mike Archbold. In November Archbold and GNC announced an industry coalition to establish safety standards and proposed a product database and mandatory GMP certification to make it onto GNC shelves. He wants to see more action and less discussion. “When do we need to do it? To me, it’s right now,” Archbold says. “This can’t be a multi-year protracted process for us to get there.”

Too much of the discussion, Archbold complains, has been inside the industry. The story, coupled with concrete action, has to go out to the public. “There might be those in the industry who would say we already do this and we’re good. Well, if the consumer doesn’t believe it then, that’s the realty. Consumer perception is reality.”

Those results may be mixed, but they are also encouraging, Rogers says. Making the industry better is better for every manufacturer, she says. If people believe the effort is real, they may accept more of the good news the industry can share. Referring to the 50 percent of consumers who think the industry follows strict regulations, Rogers contends that “if we could get that number up to 90 …,” trustworthiness would be “a given.”

“In a perfect world, it’s not even a differentiator anymore,” Roger says.

That benefits the whole industry, with the companies leading the effort possibly benefitting the most, Rogers says. Leaders in transparency and trust are going to be recognized and with recognition comes familiarity. That familiarity is a valuable commodity. “One of the things that we learn in communication is that familiarity all by itself makes people feel better about something,” Rogers says, offering the scenario of a small town with three restaurants, one of which has a billboard on the highway. Stop for a meal and “the one that you saw the billboard for is probably the one you will go into because at least you’ve heard of it before.”

Tying familiarity to high profile efforts at industry-wide reform creates a powerful combination and offers a spot on the first wave in a rising tide that could grow the entire industry.

Peter Wennstrom at the Healthy Marketing Team agrees with the potential for the rising tide but says the effort that drives it has to be tidal itself. It can’t be one company trumpeting its efforts. It has to be the whole industry working together or even category leaders doing the heavy lifting without emphasizing their brands. Several companies are in a position to do that, he says. It’s to the industry’s benefit, and to their own. “If the cake grows and you are the market leader, then of course your share grows the most.”

That doesn’t make it simple. Wennstrom’s company has a global focus, and he sees mistrust of supplements in most markets. He just sees it more in the U.S. customers. “It’s a bigger problem in the U.S. because you have bigger villains there,” Wennstrom says, referring to American’s mega-corporation business culture. He also observes an endemic case of paranoia. “You always suspect there are schemes and plans behind your back.”

Part of the answer, Wennstrom believes, is emphasizing quality of ingredients over claims. The battle for claim supremacy has “commoditized” a market that should be built on quality and integrity, Wennstrom says. Though NBJ data suggest brands can have a significant trustability advantage—67 percent rate premium brands as trustworthy or extremely trustworthy—Wennstrom doesn’t see the relationship between brand and customer as exceptionally strong in supplements. He recalls a study that looked at the strength of the relationships between customers and brands that ranked supplements against other categories. “Batteries have a stronger relationship than supplements in the U.S.,” he says.

Promoting quality over claim, Wennstrom says, is the way to bake that bigger cake. It can’t be companies promoting their brand over others either. Telling the quality story across the whole industry is “not cheap,” he says, but it’s essential. “If you don’t get your act together, your cake shrinks.” 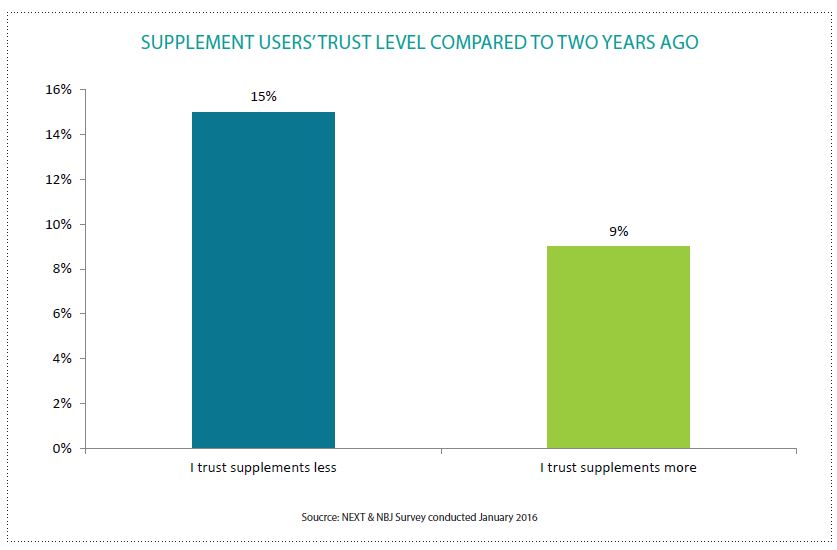 For Rogers, the quality story has to be written in shorthand. That could be the retailer—“I depend on Whole Foods to kind of pre-screen stuff for me”—but she would like to see it right on the label. She is surprised that third-party certification made so little difference for survey respondents but says the story has to be told quickly and simply. “If we were able to give them one clear thing that made it possible for them to know the difference between ‘This one’s ok and this one might not be ok,’ that’s all we are going to be able to teach people.”

The NBJ survey respondents ranked third party certifications or seals second to last among attributes that drove their supplement purchases, just above sales or promotions. For Rogers that means the education effort has not been well developed.

That’s part of what Michael O’Hara at Underwriters Laboratory is seeing. UL is developing an information system to allow customers, retailers and manufacturers to see, among other thing, what’s in the products and where it was sourced. UL is famous for its seal, but no seal is planned.

Perhaps people don’t base decisions on the seals because they don’t know what they mean, O’Hara contends. Whatever the reason, the seals have not changed the game. “Some of these programs have been around for 12 plus years. Have they solved the problem that the industry is facing? I don’t know,” O’Hara says. “It doesn’t seem like it.” 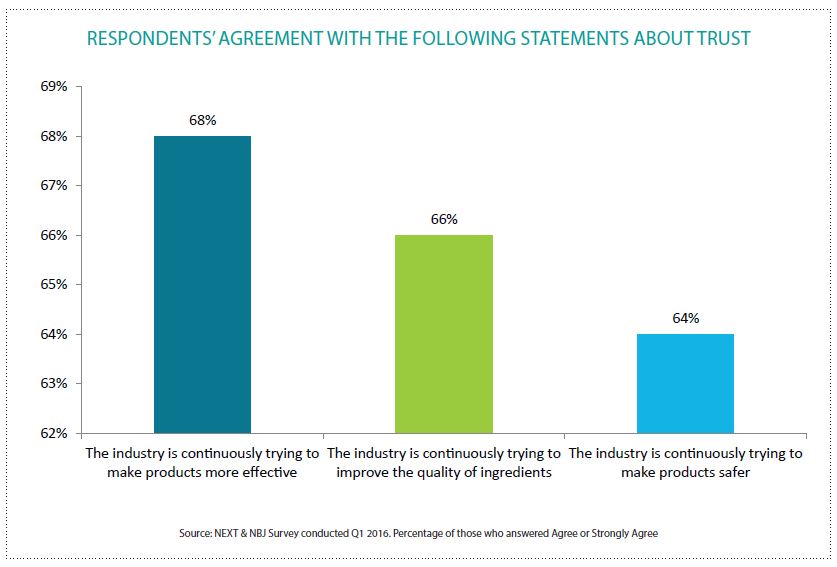 O’Hara says UL’s information platform plan, that may happen in conjunction with the Council for Responsible Nutrition’s registry or GNC’s database, could offer deeper information more appropriate to a digital age. “It’s a new story to tell,” he says.

Whatever happens, O’Hara says, it has to be industry wide. “If it is companies across the industry that support that, you’ve got many different channels to promote the good work. You’ve got more hands to pull and push.”

That fits Archbold’s thinking. Having every product in a registry or database showcases credibility. “That’s a giant leap forward,” he says. It’s also part of a new storyline for building trust. The story has to be true and it has to be told. Steps have been taken, but pushing the tipping point in the other direction will mean more work, and more voices telling the story.

Nobody is going to listen to that story when it’s just a plan, Archbold says. That’s merely a conversation inside the industry. It only becomes a story when it becomes true, when it goes beyond intention into evidence and action.

The time to get started was years ago. The time to lean in is right now, he says.

“Change is coming,” Archbold says. “And the best way to deal with it to initiate that change.”