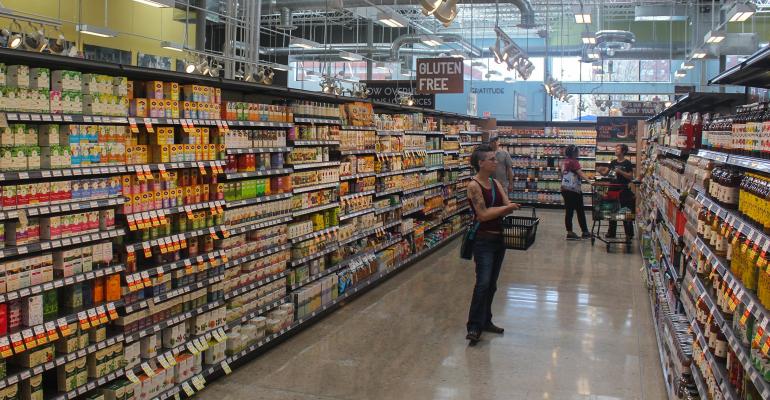 Foodservice, good customer care and even expansion are among independent natural products stores' plans as Amazon makes its mark on Whole Foods Market. Get a coast-to-coast look at what's happening and what leaders are thinking.

Now that independent natural foods retailers have had some time to let the Amazon-Whole Foods Market announcement settle, they are starting to think ahead to how they may adjust their plans in response. No one admitted to any thoughts of slowing plans for expansion, and at least a few major players are forging ahead with bold growth plans already in place. As for how the merger will change dynamics within the marketplace, everyone seems to have their own concerns.

We checked in with a few independent natural grocers to hear how they envision their path forward.

Mother’s Market & Kitchen will continue planned upgrades for existing stores and plans to open two new stores in 2018. As for the company’s retail experience, CEO Mo George-Payette said Mother's will “continue to insist on excellent customer service throughout the stores and enhance our foodservice offerings, along with a conscious effort to provide convenience to the overall shopping experience.” That will range from grab-and-go items and quick turnaround at the juice bars to order fulfillment through the company’s app, with “much more in development.”

MOM’s Organic Market has one new store planned and two remodels big enough that Lisa de Lima, VP of grocery, said MOM's considers them new stores: one 8,000-square-foot store is going to 18,000, and a 10,000-square-foot store is expanding to 16,000. The purpose is not only to physically expand but to upgrade and introduce two new concepts for the retailer. De Lima couldn’t disclose what those concepts are but gave this hint: "Currently we don’t do as much with the periphery of the store and concentrate on ‘center store;’ these new concepts will widen our offering on the periphery of the store."

Dean’s Natural Food Market is exploring opportunities for new locations, as well as expanding its prepared food offerings, which owner Dean Nelson said is what the stores' customers have made clear they want. They currently have hot bars in all locations and salad bars in most; they’re going to reduce some grocery space to make way for larger hot bars and salad bars in more locations “because that’s what our customers asking for,” he said. “Those two things are relatively low profit but drive a lot of foot traffic.”

Nelson said he’s not losing sleep over the Whole Foods deal, but the two concerns he did voice are over the supplements and body care categories—because Amazon has such a simple, efficient ordering and delivery system that could have impacts on the store—and, perhaps more worryingly, potential impacts on the supply chain in general three to five years down the road. “I’m more concerned about the future of the supply chain than I am necessarily about the competition,” he said.

In the end, though, he takes heart in what a recent survey told him—that customers buy about 25 percent of their groceries from Dean’s. “I looked at that 25 percent as an opportunity,” he said. “The reality is, even though none of us like to face it, we’re all going to share customers. And that’s OK, because it’s an opportunity.” Another upside to the Whole Foods deal, he said, is it’s even easier now to differentiate Dean's as a store that remains committed to its founding principles. “We’re able to say, [Whole Foods] is no longer a do-good entity out to help the world like we are. We don’t go around screaming it, but it makes it a little easier to use that as a point of differentiation.” 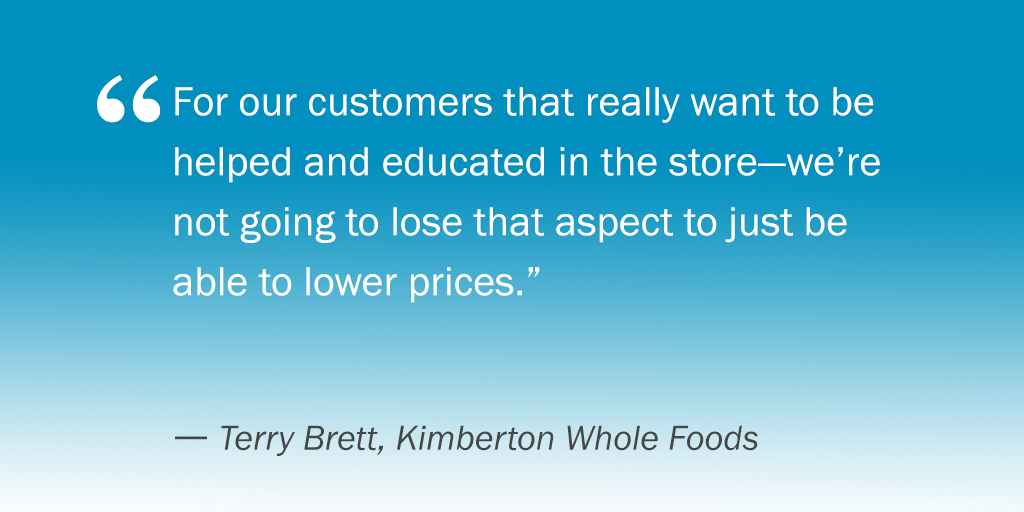 Kimberton Whole Foods is also sticking to its growth plans, with a new store opening in February and expansion of an existing store to take on its new, larger format. Past stores have been between about 3,000 and 8,000 square feet in size, and the new ones will be around 15,000. “So we’re upping the game,” Owner Terry Brett said. Kimberton is also growing its prepared foods sections with hot and cold bars, fresh sushi, baked goods and a full cheese wall with more sophisticated cheese offerings.

Brett said he and his team are also trying to figure out how to reduce margins in order to lower prices. “The Whole Foods deal isn’t the shock it might have been if we weren’t already having to be very mindful of our pricing strategy,” he said, explaining they’ve been doing a strategic pricing review and plan to lower margins in almost every category. He said that seems to be Amazon’s approach, particularly with the fastest-moving products like avocados and bananas, so it makes sense to try it as well. “We’re going to have to just work on a slimmer profitability,” he said. “It’s a fast nickel versus a slow dime. That’s been our strategy for a long time, but now it’s just kind of accelerating.”

And while Whole Foods is only a secondary competitor after Wegman's, Brett said, it is closest to Kimberton in terms of its customer service—an area where he, like other natural retailers, plans to step up his game. “That’s the trick—how do you cut costs or lose margins without losing service? That’s something we’re working very hard on in our training programs,” he said, by focusing on educating team members on the company’s mission to support local farms and artisans, and to be familiar enough with inventory so they can talk knowledgeably about products with customers. And the department heads won’t be going anywhere. “For our customers that really want to be helped and educated in the store—we’re not going to lose that aspect to just be able to lower prices.”