HomeBusiness ResourcesRetail and DistributionLucky’s Market fields bids for stores from Aldi, Publix
Recent
Latest
3 reasons natural retailers are inflation-friendly shopping destinations
May 25, 2022
Sponsored Content
Organic agriculture and its impact on ingredients and the planet – webinar
Sponsored Content
The goodness wrapped in a certified organic seal – video
Podcast: What brands need to get on shelf at Fresh Thyme Market
May 24, 2022
Trending
Getting ready for 2023: Trends for brands to consider
May 17, 2022
6 tips to promote consumer understanding of Certified Organic
May 18, 2022
The Planting Hope Company aims to prove gender equity leads to success
May 23, 2022
Sponsored Content
Exploring the CBD gummy revolution – article 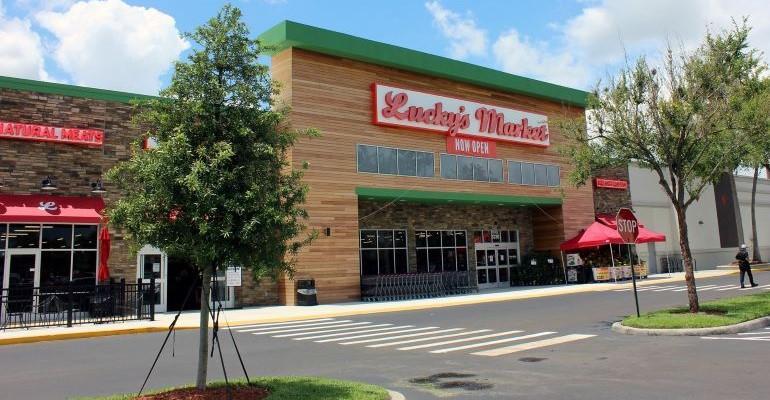 Less than a week after disclosing a Chapter 11 bankruptcy filing, Lucky’s Market unveiled stalking horse bids from Aldi and Publix Super Markets for 11 of its stores.

Overall, Niwot, Colorado-based Lucky’s plans to close 32 of its 39 stores. The specialty grocer said it will continue to operate seven stores, including its locations in Traverse City, Michigan; Cleveland and Columbus, Ohio; Columbia, Missouri; Melbourne, Florida; and North Boulder and Fort Collins, Colorado.

In announcing the bids by Publix and Aldi, Lucky’s didn’t specify store locations. A request for comment wasn’t immediately returned.

The Tampa Bay Times reported, however, that all of the locations slated to be sold to Publix and Aldi are in Florida. The Times said Publix aims to buy leases for Lucky’s stores in Clermont, Naples, Neptune Beach, Orlando and Ormond Beach, Fla., which could be converted to a Publix store or the chain’s GreenWise Market format.

The store sales are subject to court approval and an overbidding process, according to Lucky’s, which said it has retained financial advisory firm PJ Solomon to assist in the divestment of stores and other assets.

“The company continues to have active dialogue with various buyers,” Lucky’s stated. “The company still plans to cease operations in the 32 identified locations in the coming weeks and is currently running sales for its customers in those stores.”

Lucky’s reported on Jan. 21 that, “after careful deliberation and a thorough review of strategic and financial alternatives,” it planned to close most of its stores and file for Chapter 11 bankruptcy protection to facilitate the sale of its remaining locations and assets.

“At the time of filing, the company had sufficient cash on hand and an agreement for the consensual use of cash collateral,” Lucky’s said. “As such, the company should have the continued ability to meet its financial obligations, including those to its employees, as well as to vendors, for the continued supply of product to its operating locations.”

Specializing in natural and organic groceries, Lucky’s operates stores in 10 states: Colorado, Florida, Georgia, Indiana, Kentucky, Michigan, Missouri, Montana, Ohio and Wyoming. The retailer didn’t give a timetable for the planned store closings, but last week a source with knowledge of the situation told Supermarket News that Lucky’s aims to close the 32 stores by Feb. 12.

Lucky’s position deteriorated after The Kroger Co. said in early December that it would divest its stake in the grocery chain. In April 2016, Kroger announced a strategic partnership with Lucky’s that included an undisclosed equity interest. At the time, Lucky’s had 17 stores in 13 states.