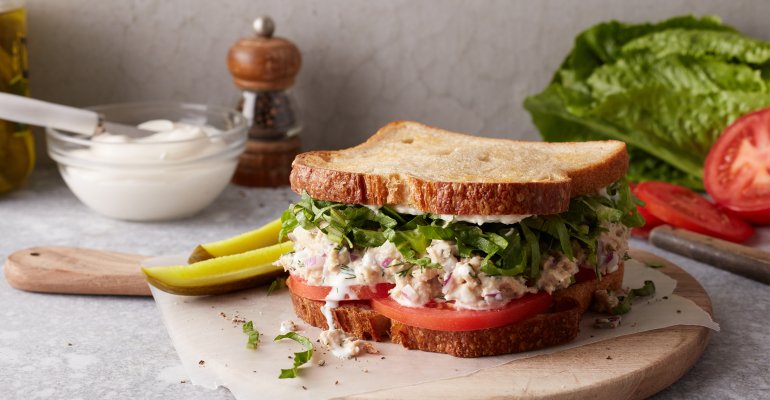 Partnerships between food tech companies and foodservice brands are on the rise.

Interest in plant-based foods has skyrocketed over the past few years, and more foodservice companies are getting on board, realizing that what was once considered a trend is now a way of life for many health-conscious consumers. At the same time, food tech companies eager to introduce their products to new demographics are realizing that foodservice is the way to go. Some are even eschewing retail launches altogether in favor of foodservice and restaurant partnerships.

In the past, we’ve mostly seen plant-based burger options in mainstream foodservice—think Burger King’s Impossible Whopper, White Castle’s Impossible slider with dairy-free cheese, Carl’s Junior’s Beyond Burgers and Del Taco’s Beyond ground “beef” in their burritos and tacos. Now, however, we are starting to see brands and foodservice concepts work together to take plant-based menu offerings to a new, more well-rounded level.

Related: The future of foodservice: Here's what to expect

In November 2020, Gathered Foods announced a new partnership with Whole Foods Market to feature its Good Catch Plant-Based Tuna in the retailer’s deli department. Made with non-GMO legumes (peas, chickpeas, lentils, soy, fava beans and navy beans), the “tuna,” is high in protein and replicates the flaky texture of seafood. At Whole Foods it’s made into a tuna salad that is available by the pound in the prepared foods section. This is Good Catch’s second foodservice partnership—last year it teamed with Veggie Grill for a Tuna Melt—and the company has aggressive international foodservice expansion plans. Co-founder and Chief Culinary Officer Chad Sarno said the partnership with Whole Foods was important for the foodservice side of the brand.

“The ongoing pandemic has made launches in foodservice difficult for both operators and their suppliers, but on the other hand, the consumer demand in plant-based is only growing and restaurants are listening,” Sarno said. “We are fortunate to have a lot of interest for growth and further launches established in 2021, from fast-casual restaurants to other food retailers.”

Related: Is your brand right for this foodservice titan?

Until fairly recently, veg-friendly breakfast options took a backseat to burgers on most quick serve and fast casual menus. With an increase in breakfast-focused menu items and all-day breakfast however, some concepts are leading the charge to give the most important meal of the day a plant-based makeover.

In January 2021, Israeli startup Zero Egg announced its partnership with Birmingham, Alabama-based eatery Tropicaleo. The company made a strategic decision to launch directly into foodservice before going to retail with a product it says “looks and functions like an ordinary egg, but is entirely made from plants.”

Tropicaleo—whose motto is “Sustainable Ethnic Eats”—is known for its healthy options, fresh flavor profiles and sustainable business practices, which was a natural fit for Zero Egg’s mission. Its egg substitute appears on two Tropicaleo menu items: the "A Caballo," a Spanish-inspired rice bowl with Zero Egg scramble, Beyond sausage, and sweet plantains, and the Breakfast Sandwich, in which it’s paired with Melinda's biscuits, Brandon's cheese, Beyond sausage and vegan butter.

"Providing Zero Egg to Tropicaleo is so exciting for us because this is exactly how we imagined our product to be used," Isabelle Francois, General Manager for Zero Egg North America, said in a press release.

Late last year, Chilean startup NotCo (which launched its AI-formulated milk in the U.S. in November), created its own restaurant delivery service called X-Not to spread the word about its lineup of plant-based products. Through online food delivery portal iFood, customers could order sandwiches, burgers and milkshakes made with NotBurger, NotMayo, NotIceCream and NotMilk, prepared by notable burger house chefs whose restaurants were affected by the pandemic.

“Even as a temporary activation, this helped build significant awareness for the company in a very short period of time, and we saw positive topline results as well,” said co-founder and CEO Matías Muchnick. “Once we build a larger portfolio, we might consider having the same kind of activation project in the U.S.”

With roughly 50 million Americans eating at fast food restaurants daily, foodservice is a colossal market opportunity for innovative plant-based food brands. Expect to see more of these partnerships in the future as the demand for plant-based menu items grows.

From foodservice to grocery: How COVID-19 forced Doux South Pickles to shift its business model
May 13, 2020

Paid Content
What to look for in a trade promotion partner – webinar
Aug 05, 2022