Kroger and Plant Based Foods Association 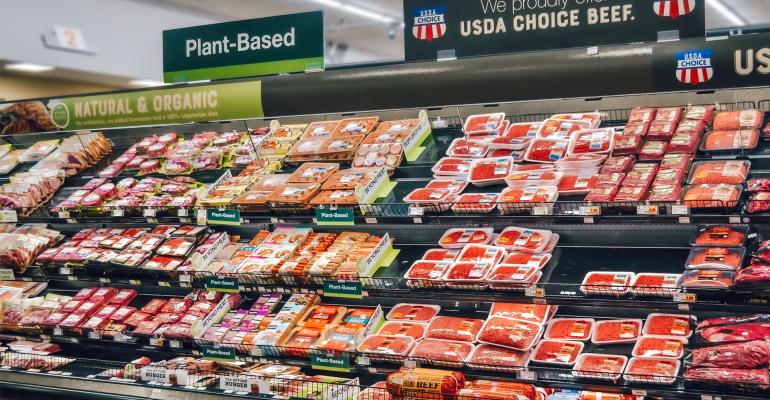 Settling an ongoing debate, merchandising plant-based meat products in the meat department does in fact help meat alternatives sell better, according to a recent study by the Plant Based Foods Association and Kroger.

Between December 2019 and February 2020, 60 Kroger grocery stores placed refrigerated plant-based meat substitutes in a 3-foot set within the animal meat department. In the Midwest region, where flexitarian diet consumers are emerging, plant-based meat sales climbed 32% during the test period. That demonstrates significant opportunity for growth of the plant-based sector even in the nation's heartland.

Through interviews, the test also found that shoppers found the convenience factor appealing—that the products were easier to find and purchase. Consumers were also "impressed" by the abundance of options.

Sales increased in the Denver area as well—despite already having a sizable plant-based consumer population—by 13%. The average increase compared to control stores was 23%.

More specifically, the Midwest test set attracted 32% more new shoppers over control stores—and also saw a 33% increase in shoppers purchasing a wider variety of plant-based meats, and a 34% jump in shoppers increasing their number of purchase occasions. (In Denver, those figures were 14%, 16% and 14%, respectively.)

"As plant-based meat sales continue to grow, with sales increasing even more rapidly compared to prepandemic levels, this research becomes even more compelling for retailers to locate plant-based meats in the meat section if they want to maximize sales by reaching more consumers," said Michele Simon, executive director of the Plant Based Foods Association.

The test included plant-based burgers and sausages as well as deli slices, roasts, seitan and jackfruit. While it was conducted before COVID-19 took a firm hold in the U.S., recent data show that interest in plant-based foods generally has remained strong—outpacing total food sales, according to a separate Plant Based Foods Association study.

"This test provides one more proof point that plant-based meats have moved from niche to mainstream," said Sean Brislin, merchandising director at Kroger, the country's largest grocery retailer. "Kroger continues to experience double-digit growth in the plant-based category, and this test demonstrates the viability of shifting product placements to reach even more customers."