The Road to Natural: Agriculture by the aisle 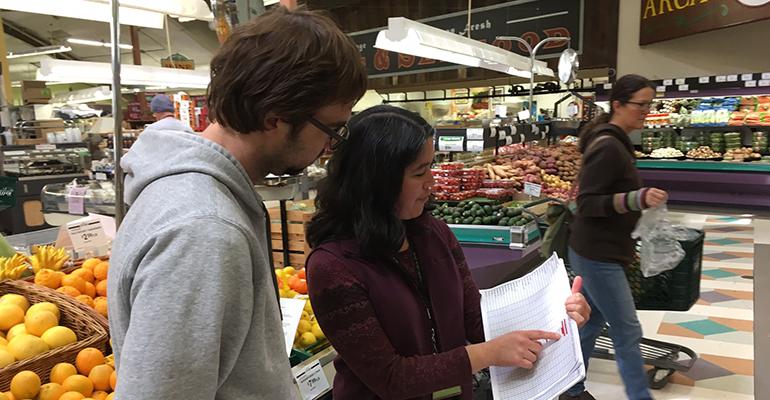 On the third day of the drive from Seattle to Anaheim for the third Road to Natural series, we explore how natural markets connect to local agriculture in Northern California.

Standing in the produce section of the North Coast Co-op, Alisha Hammer is holding two sheets of paper, each charted in green, blue and red. The lines are designated to crops like carrots, lettuce, tomatoes and berries and matched to different farmers in the area. One is the “projected” calendar of what the store expects to buy and the farmers expect to sell. The other is the “actual” calendar of what has made through the various trials and realities of the season.

That makes the projected calendar something of a wish list, a dream, but the actual calendar wouldn’t be happening without building on what might have been considered an outright fantasy 20 years ago.

A co-op located in Arcata, Calif., not exactly the farm belt, is getting local produce from local farmers 12 months of the year.

It didn’t happen by accident. The co-op has had relationships with individual farmers that go back more than 30 years, but creating a system that worked for farmers, the co-op and the consumers took work. There is no turnkey option for independent grocers. “We kind of finessed our system,” she says. “Part of this calendar is what are we looking for and who might be able to grow that.”

This is where natural markets, and particularly a co-op like the one where Hammer is the merchandising manager, can foster and even create local food systems that don’t just bring consumers healthier food but also preserve farmland and farm communities. It seems obvious—farmers taking their crops to market is an activity of ancient origin—but it is newer programs and concepts like the calendars Hammer shows us that make that ancient practice fit into a modern whirl of supply and growing demand for local produce. The “finesse” had to work for every stakeholder, especially the farmer. “In order for us to do well," she says. “We need them to do well."

People care about where their food comes from and they want it to come from local farmers, Hammer says. They demand it.  The co-op wants them to help it understand it too. Last year, late rains “kind of pushed everything back,” Hammer says, and that was explained in newsletters and in-store signage. Meeting with the farmers allows the co-op to understand what’s going on at the farm. If the crops aren’t coming in, there is a reason. “There’s always a story behind that and we want to know what that story is so we can share that with our customers.”

North Coast Co-op can get those shoppers the local produce, but the aim is to take “local” past buzzword status built on carbon footprint concerns and tie it back to the farmers. Consumers buying local food from local farmers doesn’t just save the planet, it preserves the part of the planet that’s just down the road, keeping farmers on farms and those farms from turning into housing developments. And these are not just any farms. The farmers supported by natural food markets are making the right decisions for the land. They gain star status in the produce section at the Arcata store, smiling down from glossy, full-color posters.

It’s not so dissimilar from the “Humboldt Made” program with taglines like “where local farmers really are our neighbors” at Wildberries Marketplace, just up the street from the co-op.

Wildberries Chef Eric Moore says that consumers crave that connection. Even across the store from the produce section, in the kitchen Moore runs, shoppers want to know what the prepared meals he cooks were prepared with. There is little difference between what they might ask him and what they’d ask the produce manager. “They’re wanting to know how far away it’s grown. Is it local? Is it green? What are we using? How much we are using?” Moore says.

“This community is very into what they do,” he says, “and every aspect of it.”

That natural food can be a key component in efforts to build food hubs and preserve local farm economies is encouraging, but at Chautauqua Natural Foods in Garberville, 150 miles south of Arcata, a store is trying to help transform an existing, and until recently illicit, agricultural economy.

Chautauqua owner Rio Anderson grew up in Garberville when the small town bisected by Highway 101 was a center of illegal marijuana cultivation in the United States. Humboldt-grown marijuana was a whispered appellation when marijuana was illegal and suitcases of money moved through Garberville. But marijuana is legal in California now. Prices are down and there is no need to hide plots under tree cover in the tangle of hills and small valleys that surround Garberville.

What Anderson wants to see is those pot farmers growing food and not just growing food, but growing it with the same minimal inputs required of illicit marijuana farming. “We’re trying to promote the diversification of these farms,” he says. “Eventually we want our customers to be actually our suppliers.”

Again, that is not something that can happen on its own and Anderson is scrambling to make sure it happens at all. He has put land owned by his father into production, employing the latest regenerative agriculture techniques. All the compost generated by the shop goes to area farmers. The store established a local farmers market sets up right across the street from the store. They are opening a restaurant to feature food grown responsibly on local farms.

He’s not entirely sure what will work, and how fast it will work, but he’ll keep trying until it does.

“We can get more people involved in a food community and this store can be more reflective of that community.”

At more than one store on this retail-focused road trip, retailers have mentioned that “local” is nearly as important as “organic” for many customers. It’s a status statement for anybody hosting a brunch from Boulder to Brooklyn and it’s practically a menu requirement at restaurants in the foodie-centric wine country belt not far south of Anderson’s store.

At Shelton’s Natural Market in the wine boutique-ish country town of Healdsburg, it’s both an aspiration and an obligation.

Marty Shelton worked for most of the 1990s in retail in stores owned by his brother. He came back to retail in 2008 with Shelton’s Natural Market. The natural and organic landscape changed while he was gone from the trade and the change has only accelerated since his return.

But the changes outside the doors have impacted how he does business as much as anything that happens on the shelves and refrigerated case in the 4,000-square-foot store. It’s not just natural food retailers carrying organic local produce, he explains. The farmers markets have farmers popping from one plaza or parking lot to the next most nights of the week in Sonoma County. Wine country restaurants base their menus on what they can promote as “local.” Local demand, he says, has outstripped local supply.

“It’s a foodie town,” Shelton says, in near lamentation.

That leaves smaller markets like Shelton’s hustling to find farmers willing to part with a case of tomatoes or apples at wholesale prices when they could sell it at a market stand for retail, or higher in some of the more well-heeled Bay Area enclaves. When he opened Shelton’s his brother owned a farm and that relationship kept the market in stock. Since then, keeping local produce in the cases has been a lot of work. Connections are everything, Shelton says. “We have some solid relationships with some really good farmers.”

They build relationships like they have with a citrus grower in Winters who provides them oranges. The Sheltons buy as many boxes as the grower will sell and shoppers bag them up almost immediately. Marty Shelton drives 70 miles each way to load them up. It’s not convenient, but it’s a relationship he knows he has to hold onto.

Bonnie Jean Shelton, Marty’s wife, says they are happy for the farmers. The Sheltons realize that the natural and organic boom has made them a victim of somebody else’s success, but that’s not bad news. The values and standards they insist on in their store should be the values and standards feeding America. That doesn’t mean it’s not frustrating.

“The farmers are the boots on the ground. They’re the soldiers for the planet. We’re glad they’re making money,” says Bonnie Jean. “But when you’ve got this tiny little store, it’s hard.”

The Shelton’s don’t have a plan more detailed than keep at it. The store is small, with a huge number of SKUs packed into a small number of aisles. They can’t tear out the parking lot and lay down planting beds. They want to support local farmers, but they need to find local farmers who will support them. Until then, the aspiration-meets-obligation has the Sheltons on the phone and on the hunt.