The Road to Natural: The future of retail will not be robotized 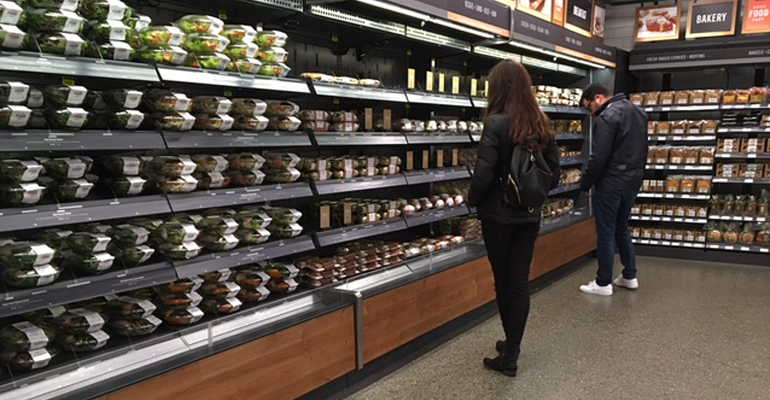 On the first day of the third Road to Natural series, we visit Seattle to see how natural retailers are adapting in the shadow of the Amazonian omnipotence.

It’s just after 8 a.m. and the sky over downtown Seattle is appropriately gray when we approach the store that Amazon is calling the future of retail. The Amazon Go store doesn’t look like much from the outside. It doesn’t look like much from the inside either. The long lines that accompanied the opening buzz are long gone and we can walk right in.

Or at least could if we’d done our tech homework. Instead, we are stalled at the door. We had already downloaded the app. We’d gotten that far. But we still had to sign in to Amazon and we had to choose the credit card and we had to find the screen with the scan code to make it past the turnstile.

And then only one of us could go through at a time.

Only then did we learn that the future of retail is about as exciting as a vending machine. Fluorescent lights. Silent people who’d probably rather be looking at their phones. A small number of product categories and a very limited selection in each. We grabbed two bottles of cold coffee (no hot beverages in the future!) and walked out without paying, or at least without paying a person. The app took care of that.

If the goal is to avoid human contact, Amazon Go is for you.

If the goal is to know what you’re buying and who you’re buying from, you’re better off at Central Co-op, our second stop, 10 minutes, two miles and one Whole Foods away.

We began this third Road to Natural trip in Seattle, in the shadow of Amazon, to learn how independent and smaller retailers might react to and cope with the online onslaught. We chose to start our trip at the Amazon Go store, viewing it as a particularly stark manifestation of the tech threat that has long worried many in natural retail. That worry spiked into additional predictions of doom last year when the digital behemoth announced it would buy Whole Foods Market. But what we learn two miles from the impersonal and barely practical future shop flagship is that natural retail, especially independents, faces larger threats than the novelty of a store with no checkouts stands.

Indeed, when we walk into Central Co-op, CEO Garland McQueen informs us that the online shopping and the Amazon/Whole Foods deal isn’t so different from any number of challenges retail has faced over the years. From changing distribution systems and pricing structures to mass market moving into organic and natural, retailers have long chased competition. McQueen suggests the same basic playbook.

“They’re good operators,” he says. “We just have to be better."

Central Co-op may be doing business in a company town where the company is doing a good job of crushing retail across all categories—been to a mall lately?—but business at the co-op is good. Growth is solid. Revenue per square foot is higher than any store in the area. Co-op membership has passed 14,000. Starting wages top $16 an hour, more than the municipally mandated living wage. Central Co-op carries 420 local brands and shares the stories of each with its customers.

The secret, McQueen says, has been an ability to adapt and create connection with customers.

“We don’t have any self-checkouts,” he says.

It’s not that Central Co-op is adverse to tech. Instacart delivery orders account for 3 to 4 percent of sales most weeks. But the technology isn’t nearly as important as giving people what they want, McQueen says. "You take care of your customers the best way you know, you listen to them and you’ll find out what they want. If you adapt to what they want and need, you will be successful.”

What they want, McQueen says, and the steady flow of customers in the doldrums of mid-morning seems to prove, is a good selection of products that are unique and carefully curated and staff people who answer questions. How many stores carry “miner’s lettuce” and then explain that it is wild foraged and great in salads? How many stores conduct an economic impact study to show how a local store stocking local products benefits the local economy and then put out copies of that study for shoppers to take home? We saw all of that in a 10-minute tour.

And we didn’t even have to download an app.

The digital threat and the real people/real food response is not news to anybody working in natural retail, where human connection is a cornerstone in the value proposition.

But that doesn’t mean things like Amazon, whether it’s the Go store or Amazon Fresh grocery deliveries or the Whole Foods acquisition, are not a threat. For Kim Henish, store director at Marlene’s Market and Deli, 20 miles south of Seattle, building a digital presence is a daunting challenge that she is not sure how to approach. She’s not even sure how necessary it is. Henish remembers walking to the “tiny” store Marlene Beadle opened in 1976. There are four locations now. Keeping up with customers is hard enough, she says. People are busy. They move. Being a “destination store” provides a loyal customer base, but it also means constantly reaching out to draw in customers who may be increasingly distracted. That’s why there is more outreach, more marketing.

Adding additional layers of technology would require maintaining that technology, looking after databases, adapting programs to existing systems, and vice versa. “It would be essentially adding a new department,” she says.

Instead, Hanesh says they do what they do best, connect with customers. They can show them the refrigerated room for organic bulk grains. They can explain where the fresh organic turmeric was grown and which kind of vitamin A might be best for them. Marlene’s is putting more emphasis on grab-and-go meals and looking to speed up the sandwich line but there is no algorithm game.

“I think we need to do everything we currently do,” she says. “And do it better.”

Three hours down Highway 5 in Portland, Lisa Sedlar takes a similar attitude in a different direction. Marlene’s Market is the quintessential natural food store. The produce is colorful but the paint tones hover around neutral. Natural light floods in through the windows. At Sedlar’s Green Zebra, the music is louder. The paint is brighter. The signs are bold. An array of taps serves a variety of kombuchas and a CBD soda. A sprawling painting of the namesake mammal isn’t green, but the wall it’s painted on is, and a particularly bright green at that.

Where Marlene’s could be an incense and macramé oasis, Green Zebra is an '80s music video.

It’s also a different model that’s serving a different need and attracting a different clientele that could be closer to the Amazon Go demographic than the kind of shopper who would understand and appreciate a refrigerated bulk grain room.

Sedlar, who worked as a purchasing director for Whole Foods and was CEO at the New Seasons Market chain, was excited to see Amazon Go when it opened, but she also sees it for what it is: largely a novelty. What customers want is convenience, Sedlar says. They don’t care whether tech is involved. They just want what they want and they want it now. The Green Zebra location where we meet Sedlar, surrounded by Portland State University, is not much larger than a standard 7-11, but it melds convenience and clean label food into a lively experience.

There may be hot dogs spinning on the roller grill, a standard convenience store sight, but they are organic hot dogs.

Green Zebra isn’t trying to be Whole Foods, Sedlar says. It is not catering to shoppers who are stocking up. Green Zebra shoppers are the quintessential grab-and-go demographic. We talk to a pair of women sitting on the bright green metal chairs and sipping coffee. One of them tells us she shops at Green Zebra four times a week, at least, buying what she needs, when she needs it. Speed is built into every step in the store’s layout. Sedlar explains. “We have four checkouts, which is a lot for a store this size,” Sedlars says. “We do like 1,400 trips a day in this store, it’s bam bam bam bam.”

Sedlar’s concept is built around a convenience standard that makes overnight delivery sound almost ridiculous. She speaks of a “20-minute neighborhood” ideal—everything people need on a daily basis should be available within a 20-minute walk or bike ride. Convenience isn’t about tech. It’s about location.

“I don’t feel like I have to get a whole bunch of sensors and cameras and robots,” she says.

It’s a model she thinks she can build into a 100-store chain. People can still order Green Zebra through Instacart and they can use an app to call ahead for their favorite sandwich, but that’s free-standing turn-key technology. Sedlar knows what her customers want and it isn’t being able to walk in and out of a store without talking, touching, or even looking at another human.

“Our technological advantage,” she says, “is people.”

Three hours south of Amazon’s version of the future of retail, a more approachable, practical and palatable future is being served with a smile, and kombucha on tap.