HomeBusiness ResourcesRetail and DistributionWalmart, Amazon lead in online grocery, but supermarkets gain ground
Recent
Latest
4 tips to get ahead of chemical concerns in packaging
May 20, 2022
7 CBD favorites in the increasingly popular gummies format
May 20, 2022
Mission MightyMe helps parents introduce allergens to babies
May 20, 2022
UNFI's Eric Dorne to step down as chief operating officer
May 20, 2022
Trending
Whole Foods' honors 30 companies with 10th annual Supplier Awards
May 18, 2022
Sponsored Content
The rise of sustainable business – eGuide
Sponsored Content
Getting ready for 2023: Trends for brands to consider
May 17, 2022
Sponsored Content
Unboxed: 7 plant-forward ice creams to stock this summer
May 10, 2022 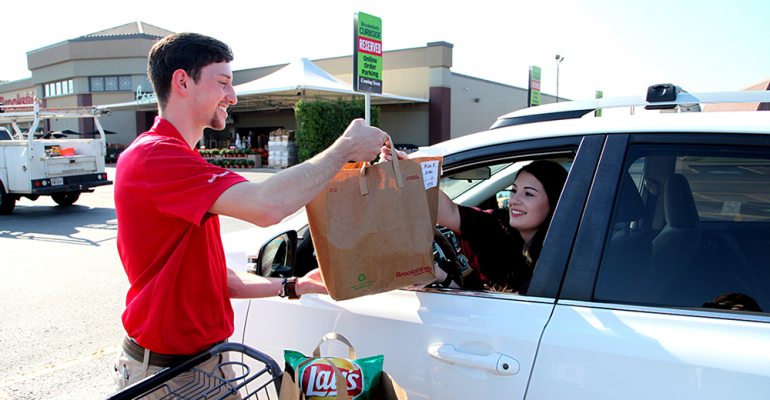 In online grocery, supermarkets are holding their own against the double juggernaut of Walmart and Amazon.

This year, Walmart zoomed past Amazon as an online grocery destination, according to the 2019 U.S. Online Grocery Shopper Study by Retail Feedback Group (RFG), a Lake Success, N.Y.-based consumer research firm. Of 1,000 U.S. consumers surveyed who shopped online for food and groceries in the previous 30 days, 37% cited Walmart (up from 32% last year) and 29% named Amazon (down from 31% a year ago) as the retail venue. (Infographics courtesy of RFG) 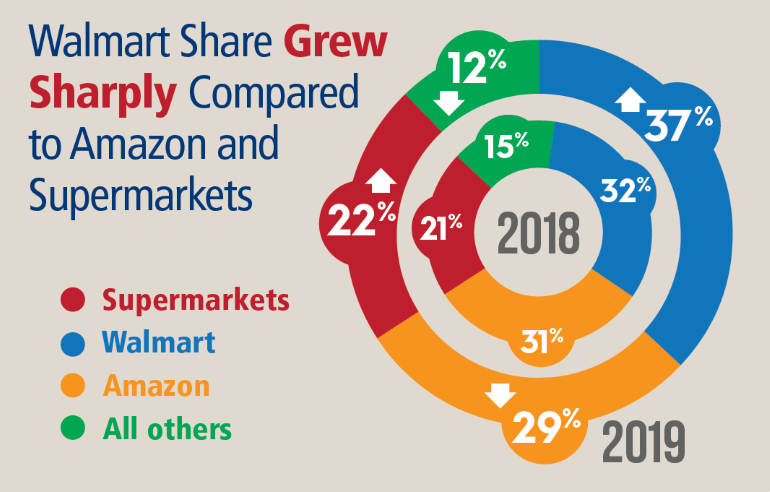 “As Walmart increases their focus on online grocery shopping, it appears to be resulting in more trial, given the surge in shoppers reporting using Walmart for their most recent online grocery shopping experience, beating out Amazon,” RFG principal Brian Numainville said in a statement. “At the same time, supermarkets/food stores also appear to be gaining ground in increased overall satisfaction as compared to last year and now register the highest percentage of first-time users, showing positive momentum for the channel.”

“Interestingly, shoppers with orders fulfilled by Instacart have an overall satisfaction score of 4.58, similar to that of Amazon and higher than both Walmart and supermarkets/food stores,” RFG noted. Of the 53% of shoppers whose grocery order was delivered, about a quarter had their deliveries made by Instacart.

Amazon had the lowest percentage (3%) of online grocery shoppers not receiving all of the items they ordered, compared with 5% for Walmart and 8% for supermarkets/food stores.

Overall, more than half of the consumers polled tried or shopped with only one online grocery provider in the past 12 months. About 20% said they shop mostly or only online for food and groceries, 32% shop online and in-store about equally, and 48% mostly shop in-store and occasionally shop online. Click-and-collect fulfillment has risen, with 47% of respondents picking up their online grocery orders versus 43% a year ago.

RFG’s research revealed that consumers are seeing fewer differences between shopping for groceries online and in stores. Though online holds an edge in convenience and stores have a quality/freshness advantage, 50% or more of shoppers found both types of shopping equal for seven of the 12 factors measured. Generational differences in online grocery shopping have faded as well, with Baby Boomers reporting a higher level of satisfaction (4.56) than Gen X (4.48) and Millennial (4.45) customers.

“These results show that the growth and maturation of online grocery shopping continues to erode the advantage once held by the shopping experience at a physical store,” according to RFG principal Doug Madenberg. “Consider, for example, that 71% of shoppers now indicate that showing a company knows and cares about food is equal for both online ordering and shopping in-store.”

Eighty-two percent of shoppers reported that freshness was the top factor when buying baked goods online, with quality (68%) and price (51%) the next most important factors. Of those who don’t purchase bakery products online, 57% said they want to choose the items themselves, 45% were concerned about freshness and 36% were uncertain about getting a good shelf-life date. Bread and cookies were the top baked goods consumers buy online.

“Shopping online for fresh items is now a more accepted part of the online grocery shopping experience,” Madenberg and Numainville added. “This growth may be a combination of a broader cross-section of shoppers engaging in online shopping, as well as more experience by online providers in successfully meeting the expectations of consumers in these departments.”

One big plus for all online grocery providers: Customers tend to buy more than initially intended. Of those surveyed by RFG, 39% said they were enticed to purchase additional items. The top reasons for doing so included “noticed it was on sale or a good value” (62%), “noticed it was new or interesting” (34%), “remembered I needed the item(s) while placing my order” (31%), “noticed it was fresh or in-season” (18%), and “site/app recommended the item(s) based on my cart or prior purchases” (17%).