HomeArchiveCheckout: Todd Humphrey builds upon a legacy
Recent
Latest
4 tips to get ahead of chemical concerns in packaging
May 20, 2022
7 CBD favorites in the increasingly popular gummies format
May 20, 2022
Mission MightyMe helps parents introduce allergens to babies
May 20, 2022
UNFI's Eric Dorne to step down as chief operating officer
May 20, 2022
Trending
Whole Foods' honors 30 companies with 10th annual Supplier Awards
May 18, 2022
Sponsored Content
The rise of sustainable business – eGuide
Sponsored Content
Getting ready for 2023: Trends for brands to consider
May 17, 2022
Sponsored Content
Debra Stark’s light shines bright on natural products industry
May 10, 2022
Natural Foods Merchandiser
brought to you by

<p>Good Earth Natural Foods</p>
Good Earth Natural Foods always tries to stay current and fresh with offerings. They listen to what shoppers want and try hard to stock their requests. General managers meet with brokers weekly to evaluate new products, and they can have a new item on-shelf the next week, rather than months out.

When Todd Humphrey bought a cold remedy from a young woman working at Good Earth Natural Foods in Provo, Utah, little did he know he would marry her, join her family's legendary business and eventually co-own five stores in the Salt Lake area. But life takes unexpected and beautiful turns. Now Humphrey and his wife, Rachel, along with her brother, Scott, carry the torch lit by Rachel and Scott's parents, the late Ken and Rae Howard, who opened Good Earth in 1973 and were early crusaders for the passage of the Dietary Supplement Health and Education Act of 1994 (DSHEA). Humphrey chatted with NFM about the family business,past, present and future.

NFM: How did Good Earth come to be?

Todd Humphrey: In 1973, my mother-in-law opened a little 20-by-20-foot herb shop in Provo. The store did well, so she moved it into a bigger building and added more products. Then Ken quit his job 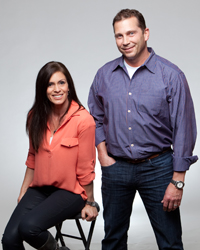 and took over so Rae could be at home more with their four kids, who all wound up helping out in the store. Years later, Rachel moved back from California to partner with her dad and learn everything she could about the business; she eventually took over the day-to-day operations. Soon after we got married, she told me we needed to open a second store in Midvale and that I should quit my job to run it. I thought that was crazy at first, but I realized it was a good decision for us. So she ran Provo, I ran Midvale, and Ken and Rae got really involved in grassroots politics. About 12 years ago, Scott joined the business, and now we've expanded to five locations.

NFM: Are natural foods and supplements popular in your area?

TH: Utah isn't as progressive as California or Oregon, so when I first started, it was all really niche. Working at a natural products store definitely wasn't considered cool back then! But now this industry is on a huge upswing in Utah, and people are far more interested in natural products. However, here a lot of things are driven by cost. People have large families, so to eat naturally can be very expensive. That's why we try to cater to everyone instead of being only organic. We carry a lot of organic and mostly non GMO, but we also know we need to be price driven. We're really big into bulk so that we can offer people great food they can afford.

NFM: What does Good Earth offer that other stores don't?

TH: We always try to stay current and fresh with our offerings, and customers know and love that. We listen to what shoppers want and try hard to stock their requests. Our general managers meet with brokers weekly to evaluate new products, and we can have a new item on-shelf the next week, rather than months out.

NFM: You have legions of loyal customers. What keeps them coming back?

TH: Education is the big thing customers really like about us, whether it's shelf signs that tell how products are processed or our knowledgeable staff. Half of our business is supplements, and we have what we call "wellness counselors" who go through a lot of training on important health topics, such as vitamin B benefits or the different sources of calcium. Customers love that they can ask particular questions—that's a big sales driver. Lots of natural foods stores lately have had to cut back floor personnel, but we've added more so we're always able to help.

NFM: What does the future hold for Good Earth?

TH: We've grown every year we've been in business. Because we're from Utah, we know which areas would support new stores, while a corporate retailer moving in from out of state might not. When we notice that enough people are driving quite a distance to get to us, we look at where they're coming from and try to put stores there. It gets more difficult the more stores you have, but we're learning how to do it and be successful. We could never take this business outside of our family.

NFM: It sounds like you're making Ken and Rae very proud.

TH: They both passed within six weeks of each other about a year ago. It's been a tough year for our family. While they no longer played a role in day-to-day operations, it was still great to have their support and to bounce ideas off of them. They are our founders, and we wouldn't have any of this if not for them.

Take requests. "Although we will special-order almost anything for shoppers, there's something to be said for being able to come into a store and get what you're looking for," Humphrey says. "We can't always bring in what they want, but we try really hard to. We like to see whether it will sell, which means others want it too."

Meet them where their wallets are. "We try to buy really deep and go with low margins so we can pass savings on to our shoppers,"€ Humphrey says. "We also have bulk rooms that have a wide variety of foods, herbs and spices that are affordable."

Make shopping easier. "So many of our customers have dietary restrictions, so we've sectioned off our grocery items into the categories they seem to want,"€ Humphrey says. "We have a gluten-free section, a sugar-free section and so on."