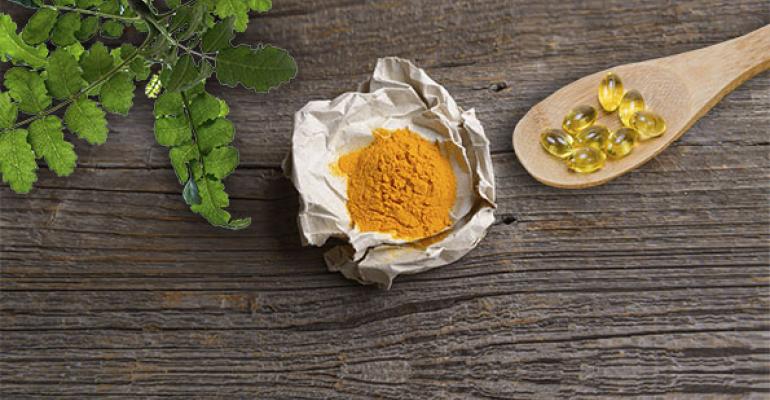 Take a look at boswellia, curcumin and DHA&mdash;three ingredients to manage the inflammation response.

In Colorado, all consumers over age 21 now have access to the newest botanical ingredient said to address issues around pain. For 23 states and the District of Columbia with medical marijuana on the books, pain consistently crops up as a leading cause of receiving a physician’s recommendation to get certified as a medical marijuana patient.

But we’re talking traditional herbals and supplements here, not just Johnny-come-lately street botanicals. And apart from headaches, pain is a product of inflammation—whether that’s in the brain (headaches) or joint cartilage in the knee (arthritis). Swelling pushes against sensitive nerve endings, which then send pain signals to the brain. While aspirin and other OTC COX-2 inhibitors and NSAIDs (the “AI” stands for “anti-inflammatory,” after all) like acetaminophen and ibuprofen are useful in acute pain, anyone with chronic problems might be better off regularly taking a supplement without side effects on various body organs that are common with the OTC and prescription set. Here’s the story on three top natural anti-inflammatory ingredients, starting, respectively, with the letters B, C and D—boswellia, curcumin and DHA.

Dried extracts of the resin of the Boswellia serrata tree have been used since antiquity in India to treat inflammatory conditions. Boswellia contains anti-inflammatory triterpenoids called boswellic acids.

The boswellic acids reduce inflammation by inhibiting production of pro-inflammatory 5-lipoxygenase (5-LOX) chemicals and blocking leukotriene synthesis. Leukotrienes are important mediators in inflammatory and allergic processes that are produced from arachidonic acid, an essential fatty acid synthesized in the body via 5-LOX. It has been suggested that the boswellic acids inhibit 5-LOX by either directly interacting with it or by interacting with the 5-LOX-activating protein. It appears the boswellic acids are unique in their inhibition of 5-LOX.

A randomized, double-blind, placebo-controlled crossover study was conducted to assess the efficacy, safety and tolerability of Boswellia serrata extract in 30 patients with osteoarthritis of the knee for eight weeks. All patients receiving boswellia reported decreased knee pain, increased knee flexion and being able to walk further. The frequency of swelling in the knee joint was decreased. Boswellia serrata extract was well tolerated by the subjects, except for minor gastrointestinal symptoms.

The latest study, from November 2013, should be the research to launch a thousand ships against the ravages of arthritis. This study in India compared a formulation of curcumin with boswellia head-to-head against the pharmaceutical celecoxib (Celebrex) in patients with osteoarthritis. The 500 mg of curcumin and boswellia, given twice daily, was “more successful than administering celecoxib 100 mg twice a day for symptom scoring and clinical examination.”

The pungent yellow spice ground from the root of the Curcuma longa plant, curcumin is found in both turmeric and curry powders. Curcumin shuts down NF-kappaB—a master switch known to regulate expression of more than 300 genes that promote an abnormal inflammatory response. Numerous studies, working in a variety of experimental models, demonstrate that curcumin effectively targets NF-kappaB gene products.

In addition, recent work suggests another anti-inflammatory mechanism of curcumin is that it inhibits prostaglandin E2 formation. It does this by targeting its precursor, IL-1B, as well as the COX-2 enzyme.

Another study combined curcumin with boswellia—this time a double-blind, placebo-controlled trial in patients with chronic kidney disease, which is characterized by increased inflammation, reduced antioxidant capacity and of course a reduction in kidney function. After eight weeks, the twin botanicals helped with inflammation in patients with mild-to-moderate chronic kidney disease.

This is the leading long-chain omega-3 fatty acid, along with EPA. Both have been found to decrease inflammation.

A lab study looking at underlying mechanisms of action for omega-3s compared eight kinds of omega-3s and discovered DHA in particular inhibits inflammatory biochemical pathways in the body.

Researchers at the University of Houston found that DHA, and oleic acid to a lesser extent, inhibited the prostaglandin E2 pathway—the major cellular means of causing inflammation “that is directly related to the pathological processes of pain, vascular diseases and cancer cell growth.”

DHA has the ability to both interfere with prostaglandin E2 creation as well as inhibit it from binding to its receptor and therefore reduce the inflammatory signaling.

Researchers conducted a human clinical trial to assess a fish oil supplement providing 700 mg DHA along with 1 gram EPA for 12 weeks on pain in patients with peripheral arterial disease. They measured subjects’ walking distance on a treadmill until it was too painful for the walkers to continue. Those who took fish oil increased their walking distance almost double, from 76 meters before fish oil to 141 meters afterward.