Of body, mind and spirit: The healing power of frankincense 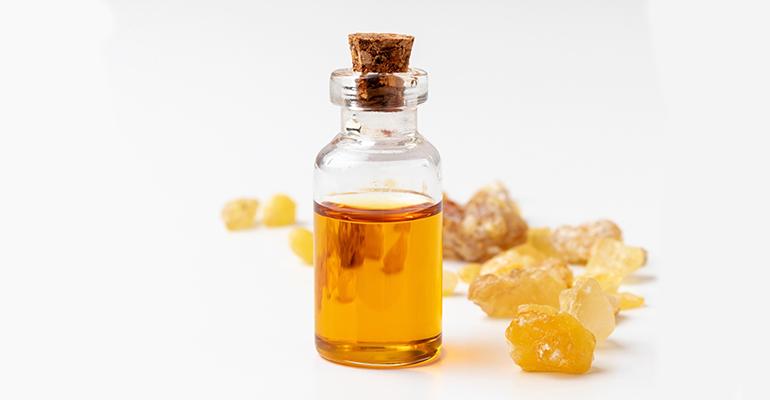 The resin and essential oil of frankincense have been used for healing a variety of conditions, both internally and externally.

From the tomb of King Tut to the manger where Jesus was born, the historical path of frankincense weaves together as many different cultures as it does applications. Cultivated from shrubs grown in various regions of the world, the resin and essential oil of frankincense are commonly used in religious ceremonies as a link to the divine. But what many may not realize is that they have also been used for healing a variety of conditions, both internally and externally, for thousands of years.

Traditional Greek, Indian and Chinese medicines revered frankincense as an important remedy for conditions involving pain and inflammation, and those of the digestive, respiratory and urogenital organs. The early Persian physician Ibn Sina documents using frankincense for ulcers, tumors, fevers, dysentery and vomiting. In Ayurvedic practice, frankincense has been used in internal medicine, trauma care and dermatology. In Europe today, the essential oil and resin are being studied and used in clinical applications that are shedding new light on possible cancer treatments.

The woodsy, spicy fragrance of burning frankincense is synonymous with religious ceremony around the world and is commonly used in meditation practice. Many believe the resin inspires purification and centering of the mind, body and spirit. Five thousand years ago, a "frankincense trail" marked the route where the precious incense was shipped from Oman through Yemen and into Jordan. Historical records indicate 3,000 to 4,000 tons of the resin were shipped annually from Jordan to Greece and Rome, where it was burned in churches for religious ceremonies.

Its balancing and purifying properties are also useful for patients addressing psychological and physical issues. A former psychotherapist, Greg Hitter, Ph.D., of Morro Bay, California, believes the stabilizing properties of frankincense are useful internally to heal a range of physical ailments and release emotional issues that may be underlying physical symptoms. His work with clients today deals more with consciousness rather than elements of the mind, he says, and he finds frankincense beneficial for bringing patients to a state of wholeness.

"It tends to put people in a supportive state where issues begin to rise out of the unconscious; on the level of mind and emotions, they begin to detox."

Its physical benefits are enough reason for Hitter to use it personally as well. "I had a muscle spasm in my back yesterday, so I took a bath with frankincense and it was soon gone. I use about eight or nine drops, and the aroma fills the air of the room. It's a pleasant and relaxing experience, yet it energizes you at the same time."

Jennifer Cornell, M.D., of Sedona, Arizona, also uses frankincense with clients in her work at the Sedona Healing Retreat. She prescribes multiple forms for a synergistic effect. "I personally use two pills twice a day instead of using Motrin or other nonsteroidal anti-inflammatory drugs. I have a holistic vet who prescribed it to my dog for his joints; that's how I found out about the pill form. I use the essential oil topically as an anti-inflammatory as well." Cornell says frankincense has been useful for premenstrual syndrome and also believes it would benefit patients who suffer from the painful rheumatic condition fibromyalgia.

Admitting she's not a typical physician, Cornell explains that she can also feel the frankincense cleaning out stagnant energy in her chakras. "The smoke itself can put you in an altered state, but I like to use a diffuser to melt the resin. I have it burning almost every day. I put a drop of oil under my nose and on my third eye to reduce stress."

Wayne McCarthy, N.D., a naturopathic physician in Waikoloa, Hawaii, believes frankincense works wonders on a sore throat. He came across the success of that application after attending a seminar with self-help guru Tony Robbins, where, he says, people had overstrained voices and throats from screaming.

"I'd put a couple of drops of frankincense in the back of their throats, and in a few minutes, they'd be going, 'Hey, what was that stuff? My throat doesn't hurt anymore.'"

McCarthy recommends mixing about two to three drops of a frankincense tincture with saliva in the back of the throat and then swallowing. "I found it to be so effective for throats that I just never want to be without it," he says. McCarthy also finds frankincense useful when traveling on airplanes. He rubs some oil in his palms and then cups his hands over his face and inhales the aroma to prevent respiratory dryness and potential cold viruses circulating in the plane's recycled air.

Numerous studies prove the multiple medicinal properties found in the Boswellia species of shrubs, from which frankincense is derived. One U.S. distributor of Boswellia sacra from Oman says the purity of this species has led to extensive scientific research yielding many beneficial internal applications.

"There are so many possible uses for this, everything from antiaging all the way to ulcers, wounds, warts, tonsillitis, staph and meningitis," says Randyl Rupar, Ph.D., owner of Mana Ke'a Gardens spa and retreat in Honaunau, Hawaii. "The reality behind it is the monograph. Boswellic acids have been isolated and tested, and components have been proven to be anti-inflammatory. It's one of the treatments of choice in Ayurvedic medicine for arthritis."

The British Journal of Medicine also published a study in 1999 that shows frankincense to be beneficial for shrinking edema, a condition in which body tissues contain excessive amounts of fluid. According to the researchers, steroids are essential to control edema in human malignant glioma patients, but may interfere with the efficacy of chemotherapy on that cancer. Boswellic acids are phytotherapeutic, anti-inflammatory agents that may be valuable substitutes for corticosteroids in edema treatment. The authors reported that boswellic acids do not interfere with chemotherapy. Further studies in laboratory animals and in human patients are required to determine whether boswellic acids may be a useful adjunct to the medical management of human malignant glioma.

All frankincense is not created equal

Frankincense is derived from several species grown in different regions of the world, but some experts are partial to Boswellia sacra, the frankincense from Oman, claiming it to be particularly pure and potent with a powerful bouquet. It is commonly referred to as royal frankincense, perhaps because it was reserved exclusively for royalty until about 50 years ago.

"I've experienced the use of other No. 1-grade resins of different species from India, Ethiopia and Turkey," Hitter says, "and in no way do they compare. There is a way of grading resins, and a golden white patina is usually a sign of a better resin. This species is extremely pure and burns much longer than the other No. 1 grades."

Rupar has developed a line of frankincense products that can be used both internally and externally. He says rigorous testing shows frankincense has no known toxicity, which the FDA backs with a GRAS rating, making it available for use in foods and supplements.

The current crisis in the Middle East shouldn't affect the availability of Boswellia sacra, according to Rupar. "The aspect of trade ought to be kept open," Rupar says. "The people I do business with in Oman do not see any challenges with export. They do use FedEx, so there could be possible delays in customs, but the trade routes are open."

So far, most natural products retailers stock either frankincense essential oil or essential oil blends and various forms of incense. Rupar, who currently sells direct to consumers, is working to introduce his Boswellia sacra tincture and hydrosol products to retailers hoping that more people will be able to benefit from the internal and external healing applications of frankincense.

"Especially in these times, we need something that is a natural sedative, rather than walking around with prescriptions for something like Prozac or Zanax," Rupar says.