How to balance your body’s pH 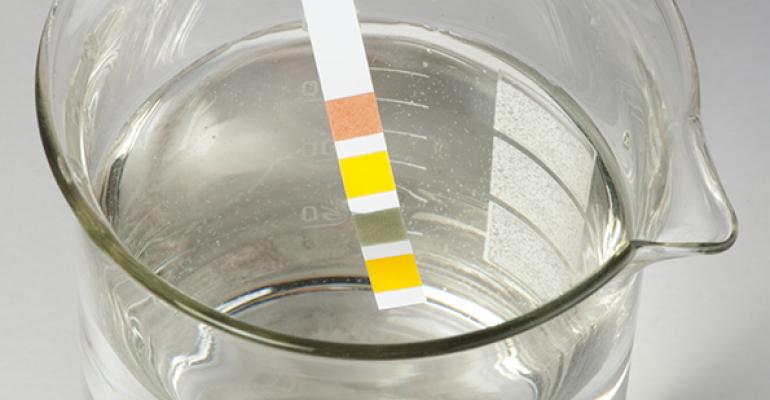 Learn about pH and how to keep it balanced within your body. Eating a diet low in animal protein and carbonated drinks may support bone health, metabolism and overall health.&nbsp;

One of the most important metabolic functions our body performs is maintaining the proper balance between an acidic and alkaline environment. When this balance is disrupted, illness can result. How does this happen and what can be done to prevent it?

To begin, the body has an acid-alkaline (or acid-base) ratio called the pH ("potential of hydrogen," see sidebar below) that represents a balance between hydrogen cations (H+) being used to form acids and the removal of these H+, which creates alkalinity. Since many body functions happen only at certain pH levels, deviations can cause problems. For example, the immune system and a host of enzyme catalysts can only perform maximally within an exceptionally narrow pH range.

Interestingly, the body has a built-in bias toward over-acidity. This is because nature has created a conundrum: Every day the body's metabolic processes produce acidic wastes—creating some 70,000 mmol of H+ per day.1 However, to maintain itself the body must remain slightly alkaline, staying in an overall range up to 7.45. Thus, cellular function is itself acidic, but the body needs to be slightly alkaline to function as a whole. To achieve this, it must effectively eliminate or neutralize excess acid on a daily basis.

The body has numerous pathways of such elimination and neutralization, using respiration, excretion, digestion and cellular metabolism as buffer systems. (Buffers are weak acids or bases that are able to minimize changes in pH by releasing or taking up H+.) The last, cellular metabolism, is an important key to health. When this system becomes overtaxed, chronic problems can occur.

Whenever one of the buffering systems fails or becomes overburdened—and the other systems can't compensate—the pH balance is upset. This can occur from something as common as anxiety or fever or as a complication of trauma or illness.2 It can also be caused by dietary choices.3 The resulting condition is generally acidosis (excessive acid production), or, under rarer circumstances, alkalosis (excessive alkalinity, when too much acid is excreted from the body).

Different parts of the body have different pH levels. Although some can have a wide pH range, others, such as the blood, are narrowly maintained—the healthy arterial blood range is 7.35 to 7.45, venous blood 7.31 to 7.41. The acidity or alkalinity of the blood profoundly influences all parts of the body. In addition, large quantities of cellular waste are dumped into the blood, so it serves as the body's acid transporter. Thus, the bloodstream carries chemical buffers that resist pH changes. Two of the most important buffers are carbonic acid, used to create more acid, and bicarbonate, used to create more alkalinity. In fact, most H+ produced by the body are balanced by bicarbonate production. Red blood cell factors, as well as the lungs and kidneys, also regulate blood pH.

With acidosis as a general trend, a healthy body must maintain adequate alkaline reserves to sustain the buffering systems—using minerals such as calcium, magnesium, potassium, sodium and zinc as fuel. Metabolic acidosis is a pH imbalance in which the body has accumulated too much acid and does not have enough alkaline elements to effectively neutralize it. Blood pH below 7.3 confirms the condition. When pH is lower than 7.2, cardiovascular complications can occur.4

In the case of what has been called chronic metabolic acidosis, the body exhausts its mineral reserves, and the buffering systems are no longer effective. Chronic acidity forces the body to borrow the necessary minerals from vital bones and organs to neutralize the acids and safely remove them from the body.5 Over the long term, this can cause prolonged damage. Based on the slow decline, this condition may go undetected for years.6

Long-term damage associated with chronic metabolic acidosis can be caused directly by acidic blood, but more often is due to overuse of the buffer systems—a metabolic case of robbing Peter (the bones and organs) to pay Paul (the blood).

The condition most clinicians think of as acidosis most often results from impaired metabolism such as diabetes, kidney disease or respiratory disorders.7 In recent years, a new factor has been added to the list—albeit with ongoing debate. Food also appears to be a major source of low-grade, pathogenically significant, systemic metabolic acidosis.5,8,9 According to one study, the modern Western diet lacks bicarbonate precursors. As a consequence, the net acid load of the modern diet is higher than it would otherwise be, leading to net acid excess.

In specific, net acid excess from food that can lead to metabolic acidosis can result from:

During digestion, the pH balance is modified by stomach and pancreatic secretions, which create temporary changes in blood pH known as acid and alkaline tides. In good circumstances, the pH quickly returns to normal. However, if digestive secretions are out of balance, the whole body can be affected and acidosis can result. 10

Diet's role in acidosis is often underestimated in the West, where low-grade metabolic acidosis is more the rule than the exception.1 In one determining study, researchers concluded that diet-induced metabolic acidosis reflects a mismatch between the nutrients of the diet and genetically determined nutritional requirements for optimal body pH.8 Another concluded that contemporary NAE diets characteristically produce a low-grade, systemic metabolic acidosis in otherwise healthy adult subjects.6 And in a meta-analysis of published data, researchers found substantial evidence that older people have fewer bicarbonates in the blood—attributed to prolonged exposure to the modern American diet.11

And what is in this diet? Too many acid-producing animal products such as meat, eggs and dairy, and too few alkaline-producing foods like fresh vegetables and many, but not all, fruits. (Acid-forming fruits include cranberries, currants, plums, prunes and sour cherries.)

How to balance your body's pH

For proper long-term balance, NAE must be buffered with diet-derived alkaline agents (the previously mentioned minerals). When not in the diet, they are taken from the body.13 Studies show that some 50 mEq (milliequivalent) of metabolic acids per day can be neutralized by an ideal diet of fruits and vegetables.14 When such consumption is reduced, the body can buffer less acid without calling on alkaline reserves. By the same token, when protein intake is more than 60 g/day, more acid is produced and more reserves are needed.3 Today, Americans' daily NAE is commonly two to four times higher than this standard 50 mEq buffering potential.1 Thus, unless supplemented, all excess acid must be buffered at the expense of bodily reserves.

Using the example of soft drinks, the pH of cola with phosphoric acid is 2.8 to 3.2. Since the urinary tract requires a pH somewhere near 5, the body must make up the difference and increase alkalinity. To achieve a urinary pH of 5, researchers calculate that a 12-ounce cola would have to be diluted 100 times, requiring an additional 33 liters of urine.15 Since this isn't possible, a corresponding amount of buffer is drawn from the body and deposited in the urine.

The bones contain a sizeable buffer reservoir and are thus a primary source of alkalizing minerals. If the reservoir is not replenished, studies repeatedly confirm that bone responds to over-acidity by dissolving its basic buffering mineral salts. This is because bone is sensitive to small changes in pH. In vitro studies document that a mere one-tenth-point drop in pH can create a multifold bone mineral loss.16 A recent clinical trial showed a positive link between lower levels of dietary acid and skeletal integrity.17 Acidosis first forces bone loss of sodium and potassium, and then carbonate, calcium, magnesium and other minerals. The results are depletion of bone tissue and a disposition to chronic organ damage and subsequent illness.6 Thus, it is quite possible that primary osteoporosis is largely secondary to acquired—and reversible—chronic, diet-induced metabolic acidosis.15,18

A study of people consuming animal protein vs. vegetarian diets demonstrates that calcium is lost in acidic conditions. Although both diets contained the same amounts of total protein, calcium, potassium, sodium and phosphorus, researchers found that urinary pH was more acidic and NAE was 27 mEq/day higher in those consuming animal protein. Additionally, daily urinary calcium excretion was 47 mg higher.19 Higher protein intake would lead to even greater losses.

A 47 mg/day loss of calcium may not seem that significant, but if uncompensated over 20 years it translates into a 365 g calcium depletion—half of a woman's total skeletal calcium and a third of a man's.15 Indeed, it is not uncommon for women to lose half and men to lose a third of their bone mass during their lifetimes.1 Previously mentioned studies suggest that chronic acidosis could be a significant contributor to this bone loss, along with other age-related changes.

Armed with all this data, what is the best path to preventing chronic metabolic acidosis? Researchers recommend adequate fruit and vegetable intake, with an emphasis on plant foods rich in complex carbohydrates and various micronutrients.22,23 Research performed at the Price Pottenger Nutrition Foundation in San Diego indicates that a nutrient-dense diet that supplies both alkaline-ash and acid-ash minerals in generous amounts is key.10 Sixty percent to 80 percent of foods eaten should be from the alkaline side (see sidebar, below).1

Alkalizing nutritional supplements, such as the minerals calcium, magnesium, zinc and potassium, as well as the amino acid L-glutamine and Krebs salts, can also help.1 It's important to limit phosphates that bind to calcium and prevent its absorption. Dietary phosphates are commonly found in carbonated drinks and animal protein.24

Taking a potassium bicarbonate tablet also may be beneficial. In order to maintain the integrity of the bicarbonates in the intestines, the tablet should be enteric coated so it is not destroyed by stomach acid. The bicarbonates should be mixed with a time-release material so that they enter the bloodstream slowly. In one study, dietary supplements of potassium bicarbonate helped healthy postmenopausal women improve calcium and phosphorus balances, reduced bone resorption rates, improved nitrogen balance, and mitigated the normally occurring age-related decline in growth hormone secretion.6

In another study, postmenopausal women were given potassium bicarbonate to neutralize the acid produced by a high protein diet. Researchers saw significant improvements in bone retention of calcium and phosphorus in a little over two weeks.25 However, the supplements were not buffered, so many of the women had digestive side effects.

Thus, research indicates that low-grade chronic metabolic acidosis can occur because of dietary choices, and the best way to avoid long-term damage, especially osteoporosis, is though a proper diet and supplementation with alkalizing elements.

Lisa Anne Marshall has been writing about nutrition and health for more than a decade. She resides in Broomfield, Colo. Her website is www.WriteItRight.biz.