HomeBusiness ResourcesStaffing and OperationsBoard rooms are becoming less white, less male dominated
Recent
Latest
Podcast: What brands need to get on shelf at Fresh Thyme Market
May 24, 2022
Natural Habitats releases Palm Positive+, A Reference Guide
May 24, 2022
The Planting Hope Company aims to prove gender equity leads to success
May 23, 2022
4 tips to get ahead of chemical concerns in packaging
May 20, 2022
Trending
Whole Foods' honors 30 companies with 10th annual Supplier Awards
May 18, 2022
Getting ready for 2023: Trends for brands to consider
May 17, 2022
Sponsored Content
The rise of sustainable business – eGuide
Sponsored Content
Natural beauty market trends
Jun 16, 2021 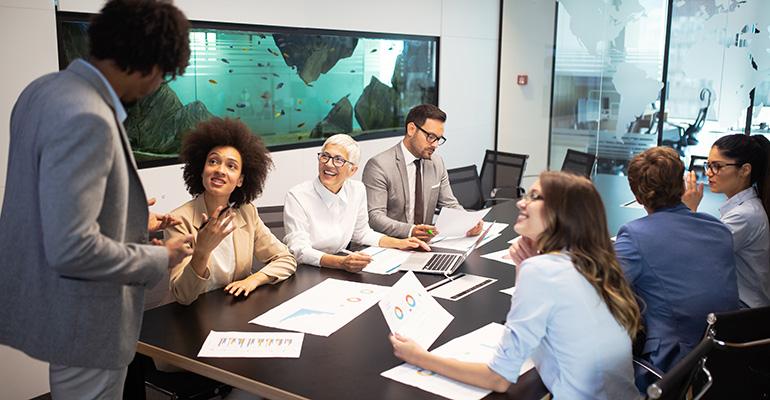 Diversity on public companies' boards of directors is increasing…slowly.

Search firm Spencer Stuart, in its annual U.S. Board Index, says 72% of all new directors are women or people of color that have been underrepresented in executive positions or on boards of directors. Of those 456 new independent directors, 47% are from underrepresented racial and ethnic groups, and 43% are women, including 18% who are bi-racial or multi-racial.

Julie Daum, leader of Spencer Stuart's North American Board Practice, says only 7% of new independent directors were Hispanic or Asian. "The real focus was on Black directors. That's a reflection of what's going on in society," she tells Forbes. The Spencer Stuart study looked at proxy reports that were filed between late May 2020 and mid-May 2021.

Directors who are Black or from other historically underrepresented racial or ethnic background account for 21% of all S&P 500 board directors, Spencer Stuart found. Overall, including the new appointees, S&P 500 boards now consist of about 75% white people and 70% men, The Wall Street Journal reports.

The Conference Board and ESGuage, an analytics firm, took a broader view at corporate boards, looking at the S&P 500, the Russell 3000 and the S&P Midcap 400. This study—Corporate Board Practices in the Russell 3000, S&P 500 and S&P MidCap 400: 2021 Edition—included proxy statements filed from Jan. 1, 2020, through June 30, 2021, as well, so the results don't exactly match those of the Stuart Spencer study. https://conferenceboard.esgauge.org/boardpractices/dashboard/boardnewdirector/5/12

The companies in the S&P Midcap 400 index have the greatest percentage of whites. 84.1%, in their new director class. Only 6.8% of these new directors are Black; 4.5% are LatinX or Hispanic; and 3.4% are Asian, Hawaiian or Pacific Islander. Men make up 61.4% of new directors, while women account for 38.6%.

The Conference Board and ESGuage report also breaks down ethnicity and gender differences by industry and company size.

Many boards are requiring their executives to recruit more women and people of color to management positions—and even tying compensation to those goals, The Wall Street Journal reported in June. In the spring, one-third of S&P 500 companies acknowledged including a diversity measure in their executives' compensation packages.

Unfortunately, about half of the public companies The Conference Board study looked at did not bring any new directors on board. According to Forbes, just 6% of boards have term limits for directors, and most term limits are set at 15 years or longer. Almost 75% of boards have mandatory retirement ages, but more than half of those are set at age 75. Ten years ago, only 20% of public companies' retirement mandates were that high.

Investors are increasingly pushing for more diversity from the companies they have stock in. BlackRock Inc. informed its portfolio companies in 2018 that they wanted to see at least two women on their boards, according to the Society for Human Resources Management article, "Corporate board diversity: Moving beyond lip service," published in January.

In July 2020, Goldman Sachs began requiring American and European companies have diverse boards before the firm would underwrite their initial public offerings. And in December, Nasdaq proposed new rules that require most companies that trade on the exchange to have at least one female director and one director who is a person of color or LGBTQ.

Women on Boards Project to teach companies how to diversify
Mar 02, 2020