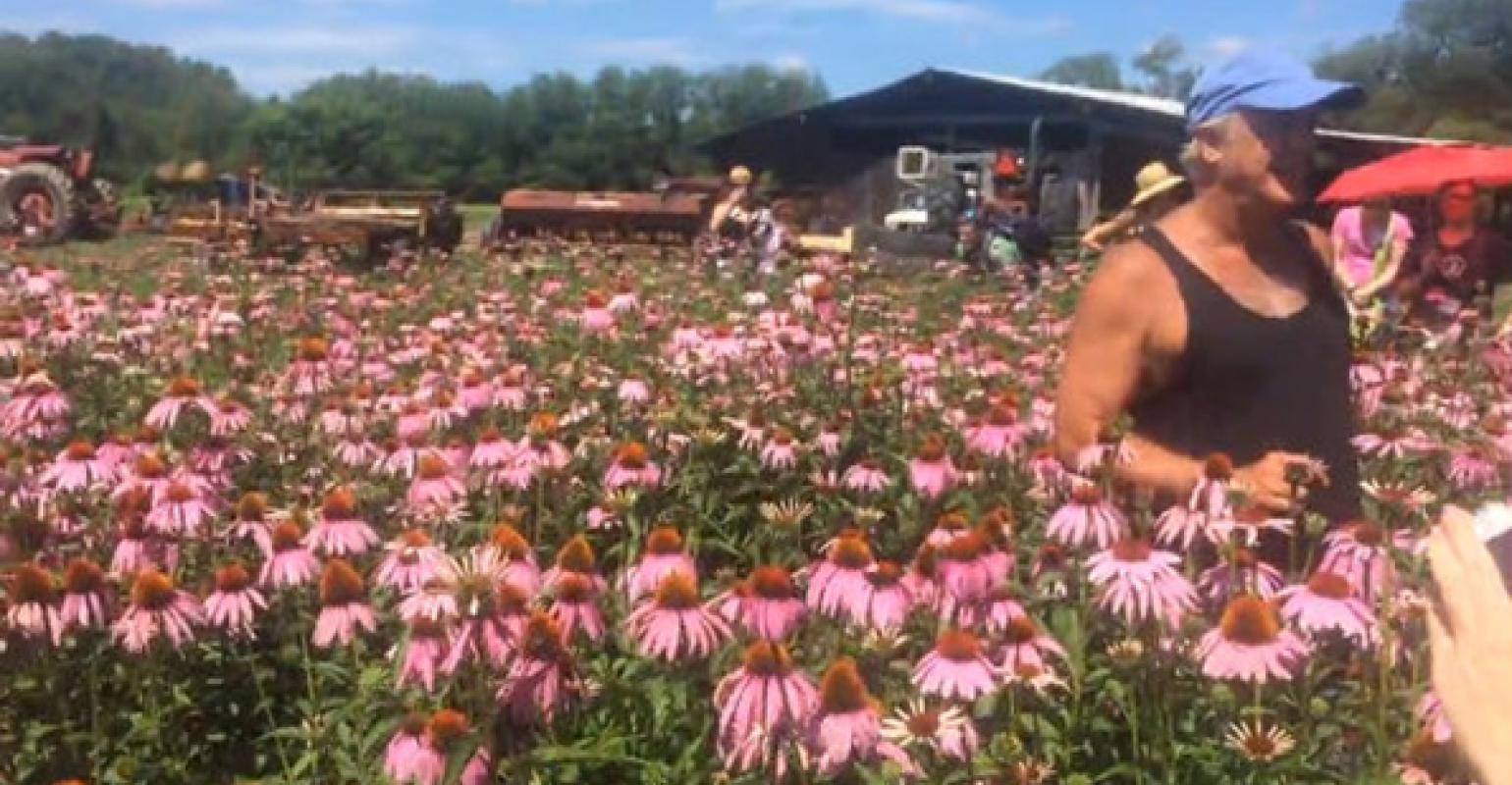 Asheville, home of Gaia Herbs, the mecca of plant medicine

The cultivation and commercialization of western North Carolina&#39;s&nbsp;bounty is not merely evident but supported in ways small and large, from microbreweries to medicinal herbs.&nbsp;

Altitude is more than an attitude.

At the intersection of the Blue Ridge Mountains and the Great Smoky Mountains lies western North Carolina, with Asheville (elev. 2,133 feet) as its hub of civilization.

Long known as an outdoor mecca, what with its rivers and mountains, its most recent bona fides are as an eastern brewpub capital (thanks to the clean water source), featuring more than 100 microbreweries including the eastern HQ of Sierra Nevada, New Belgium and Oskar Blues.

An even longer tradition is in its Appalachian country-living "homesteading" ways—an Asheville store features all the trappings needed to scratch out subsistence living on your plot of hillbilly paradise—fermentation tools, beekeeping material, tinctures, bulk herbs, how-to books on home canning and foraging, awls, axes and shovels.

Western North Carolina has long been a center for holistic healing, thanks to the Cherokee Native American tribe as well as its lofty elevation. It is fast joining innovative agricultural practices with integrative herb-based medicine to power new finished product development. Now it's attracting businesses to move to the area.

But the social and economic manifestation of this unique place—most biodiverse slice of heaven in North America—is the long-simmering and now blossoming pursuit of medicinal herbs. Black cohosh, ginseng and goldenseal grow wild in the forests here.

Gaia Herbs grows about one-third of the medicinal herbs it uses in its supplements on its organic farm. This growing season, there are about 35 different medicinal herbs planted, from holy basil to echinacea, a ginkgo grove and 15 acres of valerian. The company estimates it will harvest 6.5 million plants this year, and has a growing seed bank from its clinically validated plant type specimens that is of high utility for botanists and the herb industry.

Its "Meet Your Herbs" program has long set the bar at forward-looking transparency efforts—shoppers can go online and type in the unique code on every box of Gaia herbal supplements and can find exactly where the plants inside that very bottle were grown, and see all the analytical test results vouchsafing the safety and integrity of the herbs.

Ric Scalzo founded the company 30 years ago in Massachusetts, and moved operations to the farm in Brevard, North Carolina, 20 years ago.

"We have lots of biodiversity in this location," says Scalzo. (Watch a video interview with Scalzo on the farm.) "That makes the whole thing botanically rich. That means we can grow a lot of diverse crops here."

From small-scale tincture makers feeding off backpack wildcrafters to big-time and booming national supplement brands, the cultivation and commercialization of the region's bounty is not merely evident but supported in ways small and large.

Greg Cumberford spent 14 years working at Gaia Herbs, and helped found the nonprofit Bent Creek Institute in 2006. The organization's mission is as a business incubator, helping people commercialize traditional herbal medicine and integrate it into the health care system. His goal is to congeal all the individuals interested or active in the botanicals space into a regional economic engine.

And he's got a lot of help.

At the North Carolina Arboretum Germplasm Repository, researchers there are changing the way modern and future agriculture is being practiced. They are finding that microbes associated with plants, called endophytes, in some cases have as much to do with the plant's medicinal activity as anything else in the plant. In some ways, it is very much akin to the antibiotic/probiotic movement in modern nutritional circles.

"This is a huge agricultural change," says Joe-Ann McCoy, PhD, director of the germplasm repository, pointing to a store-bought bottle of "Organic Grow!," a plant food spray bottle featuring microbes as active ingredients. "Ag is going away from antibiotics to probiotics. They've just figured it out. That's where the trend will go, just like natural products. Microbial ag products like Grow! are huge this year."

Cumberford sees the work the repository is doing as representing a new era in phytomedicine, and also as a revolutionary way of preserving plant species.

Alternately, endophytes could be added to goldenseal to create something else entirely.

"You could patent a plant by introducing endophytes into it and having a superplant," Cumberford says. "This opens up a new realm of phytopharmacy."

It also will move closer together the twin innovations of natural products and pharmaceutical-based R&D. In an age of climate change, it could help with extirpation of species. And since endophytes have been bred out of seeds and agricultural products over the last half-century, this is a new era indeed in undoing all those chemical-intensive agricultural innovations post-WWII. Re-introducing microbes back into the soil is now trending among conventional agricultural concerns. Everything old is new again.

The work done at the arboretum is crying out for attention and commercialization. So Cumberford started Bent Creek Botanical Technologies, a for-profit arm involved in getting this work funded, and licensing out the results of the research. The opportunities for new product development in the botanicals sector are - vastif only this work can get the attention of some of the world's largest botanical growers and ingredient suppliers.

Another iron in Cumberford's fire is the US Botanical Safety Lab, which helps companies with analytical testing of raw materials, formulation assistance of finished products, and GMP compliance in the process of making those products.

The testing service part of USBSL works closely with the arboretum because of the arboretum's validated voucher specimens.

USBSL is currently working with a half-dozen clients using botanicals as key parts of their products, everything from healing skin lotion to homeopathic products.

USBSL is located in an office in a building that was a BASF facility until 1990. The chemical giant gifted the building, replete with tons of fixed equipment like lab benches, to the local Asheville community college, which is now the Technology Commercialization Center, serving as a business incubator space for some 60 companies.

One of the incubator concerns is BioNetwork Labs, whose capabilities include a fee-for-service analytical testing lab for those startups that can't afford their own chemical analysis equipment like HPLC machines. It does a good business with helping local craft brewing clients measure bitterness units, with helping biodiesel clients meet regulatory requirements, and a small lab kitchen helps those looking to graduate their food concepts from their home kitchens.

"The inspiration here is to make western North Carolina into a hub for the natural products business," says Marie Knight, the laboratory coordinator at BioNetwork, which is affiliated with the community college. "We're not a natural products company but we're trying to support the proliferation of them."

And also in the same building is Blue Ridge Food Ventures, which is a larger test kitchen to help startups scale to proper business concerns.

"We have a fertile crescent of nonprofit resources here," Cumberford says. "USBSL can get you from ideation to product development, you can formulate here at the community college's BioNetwork Labs, and there's a test kitchen next door."

The Appalachian School of Holistic Herbalism is the southeast's oldest herbal study school, offering everything from weekend workshops in wildcrafting practices to months-long classes in plant identification and medicine making.

The Herbiary Store just opened two years ago, and sells everything from herbal tinctures made locally to national supplement brands.

"The biodiversity is so great here, it makes sense that this tradition carries on," says Jodi Massie, a store employee. "The Missouri Ozarks are also biodiverse like here, but it's not as developed. It's exciting to see this growth."

"I'd rather keep it small because we're using fresh plant material," Dunn says. "We're doing it like the indigenous people would do it."

In the four years Dunn has run the business (she purchased it from founder and local legend and author Susan Weed), she's had double-digit annual sales with close to 80 tincture formulations and perhaps two dozen bulk herb products.

And the legacy natural products personality of the area is "healing maniac" Frank King, who runs homeopathic supplement company King Bio. But King also has interests in mammal curiosities like waitusi and bison - he has the largest bison herd east of the Mississippi. King started as a chiropractor and healer back in the 1970s, and started the homeopathic company in 1989.

"I wanted to heal the soil and the food and the world," says King, who just published a book, "The Healing Revolution: Eight Essentials to Awaken Abundant Life, Naturally." "That led me to want to heal the humans. We're not just peddling products but empowering people."

People, companies, a cottage industry, a way of life. There's a whole lot of empowering going on in western North Carolina. It's a central hub of innovation, company creation and entrepreneurial activity in modern agricultural practices, plant-based healing, and natural products healing. In the highlands of Carolina, the attitude is to keep on growing.