ConsumerLab.com purchased and tested three of the most popular brands of coconut water. The testing found that two of the products had far fewer electrolytes than claimed.

Coconut water—the natural juice from green coconuts—is often touted as a natural alternative to sports drinks. But does it really deliver? “It depends on the brand,” says ConsumerLab.com President, Tod Cooperman, M.D. ConsumerLab.com recently purchased and tested three of the most popular brands of coconut water: O.N.E. Coconut Water, Vita Coco 100% Pure Coconut Water and Zico Natural Pure Premium Coconut Water. The testing found that two of the products had far fewer electrolytes than claimed. One had only 18% of the listed amount of sodium, the key electrolyte for rehydration. The other had only 59% its promised level of sodium. Magnesium levels were also lower than claimed (77% and 64% of the listed amounts). Only one of the three popular coconut water products delivered its claimed electrolytes. The new report is now available online to ConsumerLab.com members.

Coconut waters have become a big business. The company behind Vita Coco, All Market Inc, predicts $100 million in sales this year for its product alone.

Among the coconut waters tested by ConsumerLab.com, all contained significant amounts of potassium (about 570 mg to 670 mg per serving), which is about 25% more than in a banana. However, this amount of potassium is not essential for efficient rehydration. Sodium, which accounts for the vast majority of mineral loss during exercise, is much more important. Amounts of 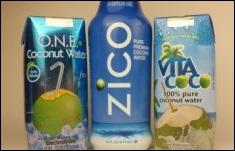 sodium in the coconut waters ranged from just 11 mg (in a 330 mL suggested serving) to 160 mg (in a 414 mL suggested serving). Typical sports drinks such as original Gatorade provide about 110 mg of sodium per cup (8 fluid ounces or 240 mL). “Because they are mostly water, all coconut waters can provide hydration but those that provide more sodium, at least 110 mg of sodium per cup, will be the best choice for replenishing electrolytes,” says Dr. Cooperman.

ConsumerLab.com is a leading provider of consumer information and independent evaluations of products that affect health and nutrition, with online reports for over 900 products. The company is privately held and based in Westchester County, New York. It has no ownership from, or interest in, companies that manufacture, distribute or sell consumer products. Membership to www.ConsumerLab.com is available online.