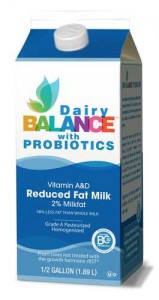 Dairy Balance Milk is one of the first milk brands to be fortified with the patented probiotic, GanedenBC30, and one of only a handful of probiotic-enhanced milks available to consumers, the company said in a news release.

“Probiotics are ‘good bacteria’ that has been shown to improve digestive health and support immunity,” said Jeff Foster, president of Foster Farms Dairy. “Sales of yogurt enhanced with probiotics have dramatically grown and studies have shown the probiotic used in the Dairy Balance milk delivers more active cultures than yogurt.”

Dairy Balance, which has the same taste, texture and color as milk, is now available at more than 300 Northern California locations. Distribution to more than 500 outlets is scheduled by the end of the year. Dairy Balance milk is offered in whole and 2 percent reduced-fat varieties and has a suggested retail of $3.49 for a half gallon.

Study shows goat milk can be considered a functional food
May 20, 2011