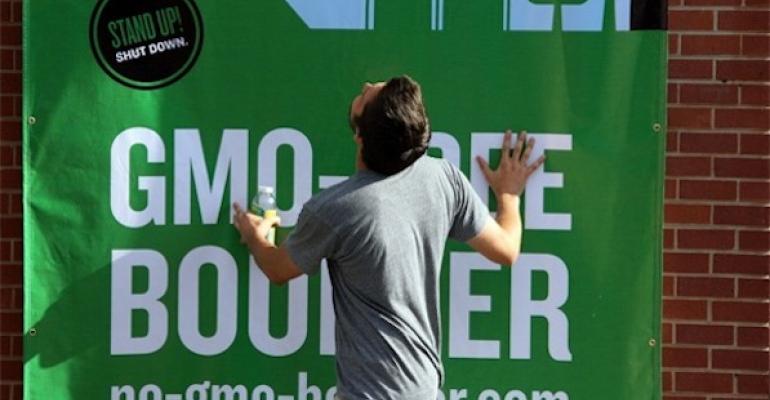 In a move that could have been orchestrated by Monsanto themselves, Cornucopia Institute put together a genius infographic that went viral on blogs and Facebook last week. It prompts consumers to believe that Organic companies are giving money to defeat a proposition that would label GMO foods.

Monsanto dumped $4.2 million into the campaign last week to defeat the initiative for a total of $37 million from Monsanto and their cohorts that don’t believe you have a right to know what’s in your food.  And then they sat back and watched their opposition fight amongst themselves.

The GMO lobby is well organized and well funded. The only problem they have is consumers. 96% of them nationwide want GMOs labeled according to an MSNBC poll.

So how do you win against odds like that? Divide and conquer. Make consumers think that Organic is as evil as the opposition. Then hope for apathy to set in and prevent those folks from coming out to the polls.

War chest vs. army of consumers

In the battle to label Genetically Engineered foods in California, the Right To Know campaign is in a David and Goliath war with Monsanto who has brought their war chest to the game.  This is essentially a game about money versus consumers. A recent Pepperdine poll taken of likely voters in California shows that an overwhelming 69% will vote YES for the ballot initiative that would label GMO foods in your grocery store. A mere 22% would vote NO.

Experienced pollsters find it unlikely that any amount of money can move the needle far enough to come back from a deficit like Monsanto is facing.  That’s the good news.

The bad news is that the campaign itself has become a vehicle for derision between the Organic companies themselves and the consumers who depend upon them to provide the only solution to avoiding GMO food.

Organic companies are not the enemy

One such example is Silk Soy Milk, owned by WhiteWave Foods who also owns Horizon Organic Dairy. WhiteWave is located in Boulder, Colorado where Monsanto recently set up shop to defeat a ban on GMO crops grown on public farm land. Citizens were up in arms and had been silenced on the issue through a series of ingenious committees and a political process that had shut them out.

Silk stood up for those citizens in Boulder County. They invested $60,000 to become the single largest contributor to the GMO Free Boulder Campaign, funded a county wide survey on the issue and in a show of solidarity, Silk shut down their offices for 3 hours one afternoon to rally in front of the Courthouse with the rest of Boulder.

The outcome of those efforts was a ban on GMO Alfalfa and an allowance on GMO corn and GMO sugar beets. The Boulder County Commissioners also mandated support for a national labeling law on GMOs to give consumers the right to know what they are eating.

On the labeling issue, Silk and Horizon are in support of the underlying principles of California’s Proposition 37 but have committed their resources to national initiatives that will help consumers in all fifty states. They are a huge supporter of the Just Label It campaign at the federal level.

As for fighting GMOs in the agriculture arena, they have brands that helped launch the natural and organic industries, which are inherently a big part of the GMO labeling push.

·  Horizon Organic brand has been certified organic for more than 20 years. People have come to know and trust that the certified organic label means their food is produced without the use of pesticides, antibiotics, added growth hormones and GMOs.

They believe consumers have the right to make informed choices about the foods they eat, and labeling is a very big part of that.

We need leadership such as Silk has shown. Their local support for their community and their national support for nationwide labeling are the real story. Those are the merits in the case.

The infographic demonizing Silk and the other organic brands as pro-Monsanto and against labeling is just plain wrong.

Boycotting organic companies that keep Non-GMO farmers in business is not the solution to defeating Monsanto. Boycott GMO foods.

Don’t let Monsanto divide the consumer public and create apathy in the voters. There is a difference between the organic companies and the parent companies that have bought them up. Let’s keep our eye on the prize and focus our energy to exposing GMOs. That is how we win.

In what has come to be known as the epicenter of the natural and organic foods industry, Boulder, Colorado took a stand. GMO Free Boulder is a campaign to raise awareness about the truth behind the ownership and genetic modification of our food system and how that system has infiltrated our local Parks and Open Space, our political policy, our school lunch system and most importantly, the lifestyle that has come to be known here as health and sustainability. They are supported by both local and national business leaders, citizens, doctors, authors and school children and gives a voice to the 71% of voters in Boulder County who want GMOs prohibited on public land.