HomeProducts and TrendsIs jackfruit the next hot clean-meat alternative?
Recent
Latest
EXPO VIDEO: How did a young sparkling water brand get licensing deals with Marvel and Disney?
May 16, 2022
Beyond Meat's product launches lower Q1 profits
May 16, 2022
Sponsored Content
Exploring the CBD gummy revolution – article
Moonshot Snacks at the forefront of eco-friendly food innovation
May 13, 2022
Trending
Debra Stark’s light shines bright on natural products industry
May 10, 2022
Monitor: Consumer research on collagen shows how much education is needed
May 12, 2022
Hemp CBD industry struggles so far in 2022
May 10, 2022
Natural beauty market trends
Jun 16, 2021

Is jackfruit the next hot clean-meat alternative? 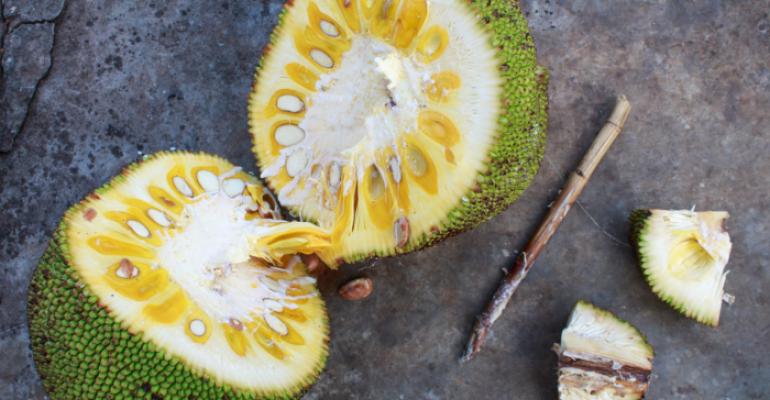 Does spiky, massive jackfruit have potential to gain traction in the U.S.? Or is it just too weird for American consumers to adopt as a vegan meat substitute?

If you’re walking through a forest in Southeast Asia, look up. Chances are good that you’ll spot a massive, green-yellow orb covered in spikes. While it looks like a prehistoric wasp’s nest, it’s actually jackfruit—the largest tree-borne fruit in the world that can grow to weigh up to 80 to 100 pounds (read: don’t get bonked on the head with one).

While superlative, jackfruit is of increasing interest to the natural industry not for its potential to flavor cookies and cakes with its Juicy Fruit-esque flavor, but because young jackfruit has a near-identical resemblance to pulled pork or beef, if stewed in barbecue spices or marinades. It’s traditionally served to bulk up savory curries and rice dishes in Southeast Asian countries like Bangladesh and India—a practice adopted by hundreds of stateside vegan restaurants and blogs. Indeed, jackfruit recipes proliferate on Pinterest—the unofficial litmus test for burgeoning food trends.

As thought leaders ranging from health experts and organizations to environmental and animal welfare activists advocate for Americans to reduce their meat consumption, the market for clean meat substitutes is ripe for growth. But will jackfruit—which has been used for centuries (millennia?) in other countries—have potential to be the darling of the Meatless Monday set?

Only two natural companies (to my knowledge) feature jackfruit as a meat substitute: Upton’s Naturals and new-to-market brand The Jackfruit Company. Both manufacturers take the guesswork out of cooking jackfruit with heat-and-eat usability, making the fruit have excellent texture and tear. Like brisket, it falls apart with just a coaxing of your fork. Plus, like chicken or tofu, it takes on the flavors of foods it’s cooked with.

Beyond Meat crafts a near-analog meat product by reorganizing plant proteins. It’s a sophisticated yet straightforward method that uses heat and pressure. But Beyond Meat faces a challenge to communicate this message to shoppers. For consumers who often judge foods based on the length and whether they can pronounce ingredients (or can readily buy them in grocery stores), pea and soy-protein chicken can be a tough sell.

The jackfruit pioneers argue this makes jackfruit a viable option for people consumers who eschew meat. “Jackfruit is a whole food that is minimally processed with a great, meaty texture and it will absorb any flavor,” says Upton’s Naturals Founder Dan Staackman. “It’s also unique within the category because it is both soy- and gluten-free.”

Plus, jackfruit has a unique sourcing story that could woo health and welfare-minded consumers. Before The Jackfruit Company launched, founder Annie Ryu first established Global Village Fruit, a parent company to ensure an ethical supply chain. "Global Village Fruit was founded on the vision of converting jackfruit wastage in its native land of southern India to a delicious, nutritious food: to transform health, farmer's livelihoods and humanity's eco-footprint for the better,” says Ryu. “The Jackfruit Company is the brand we developed to accomplish this mission.

In a time when people consume snacks that boast up to 20 grams protein per serving, it’s obvious that this macronutrient is valued—particularly with followers of paleo or low-carb diets. The glaring limitation of jackfruit is that it has very little protein. Each cup of plain, water-packed jackfruit only contains 4 grams. Compared to Beyond Meat’s Chicken-Less Strips, which contain 20 grams protein per 3-ounce serving—about the same as real chicken breast.

But the upside is that jackfruit is rich in fiber and relatively low in calories. And proponents say that protein can easily be incorporated into jackfruit meals via other ingredients. “The reason people look for meat replacements has more to do with cultural conditioning to flavors and textures. Jackfruit delivers both of those well,” says Staackman. “Protein demand is a bit overstated in the U.S. If people want more with their Jackfruit they can easily add seitan, tofu, quinoa, beans or other plant foods to their plate that are high in protein.”

Consumer interest in boosted protein doesn’t seem to be waning anytime soon—especially as research continues to show that protein intake is correlated with weight loss. But as more brands find innovative, easy ways to bring gluten-free, grain-free, dairy-free, nut-free, egg-free jackfruit to American audiences, I project that it has big (like, jackfruit-big) potential.

What is jackfruit, and why all the buzz about it as a meat alternative?
Jan 07, 2016