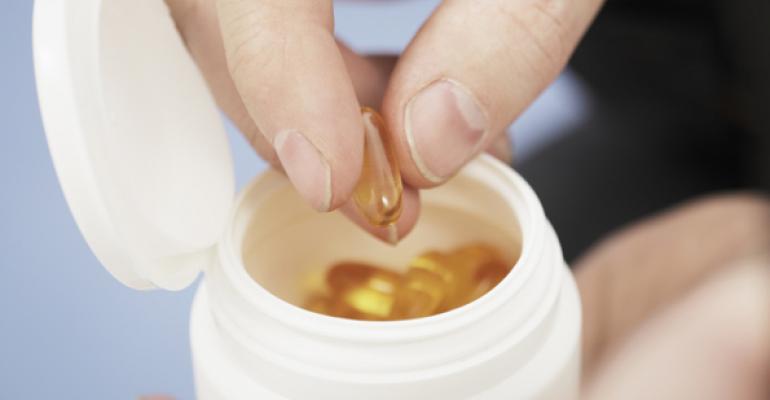 Omega-3 levels in the blood may not be a reliable indicator in terms of how much EPA and DHA is reaching the brain.

A new study published in The Lancet indicates that it might take much more omega-3 to reach the brain in Alzheimer's disease (AD) patients than previously thought.

Animal models and observational studies of omega-3 EPA and DHA have shown an association between higher levels of these fatty acids and lower incidence of AD and dementia. To date, however, clinical trials testing the direct effects of omega-3 supplementation on AD have by and large come up with disappointing results. Until now.

Although a previous study tested the effects of high doses of omega-3 on blood and cerebrospinal fluid (CSF, the fluid that bathes the brain) in patients with AD, this new study is the first to examine this question in people without AD.

The study population consisted of 33 participants from Los Angeles-men and women aged 55 and older who, although not being cognitively impaired themselves, had a family history of the disease. Typically American, they had generally sedentary lifestyles and they ate little to no fatty fish. None had taken omega-3 fatty acid capsules for at least three months prior to the study.

Approximately half of the group (15 people) carried a gene variant known as APOE4, which is linked to inflammation in the brain and is a known factor for increasing AD risk by a factor of four or more.

Those in the treatment group were required to take omega-3 supplements containing 2,152 mg of DHA for 6 months and were also provided instruction to otherwise limit their polyunsaturated fatty acid intake. The control group was instructed to take similarly looking placebo capsules that contained corn/soy oil. Both groups were instructed to take daily vitamin B complex supplements, which help the body process omega-3s.

All participants were seen three times: at screening, baseline and 6 months (end of study). The researchers were looking for changes in plasma and CSF levels of DHA and EPA and how these correlated with APOE status (E4 or not) and CSF levels of a biomarker of brain amyloid deposition (A-beta-42). Cognitive function tests were also given.

This study used a daily dose over 2 grams of DHA, a dose that far exceeded what has typically been used in previous clinical trials using 1 gram of omega-3s to assess the preventive power of omega-3s.

At the study's conclusion, the treatment group had a 200% increase in their blood plasma DHA levels compared with the placebo group, but the DHA in the CSF went up by only 28%. However, that 28% increase was better than that previously reported with lower DHA doses.

In both the plasma and CSF measurements, the percentage increase for DHA for those who did not carry a copy of the APOE4 gene (which is the case for about 75% of Americans) tended to be higher than for those who were carriers.

Further, those in the treatment group who did not carry the APOE4 gene variant showed an increase of EPA in their CSF, which was three times greater than that seen in the APOE4 carriers. (Recall that only DHA was supplemented, not EPA. This finding implies that DHA can, to some extent, raise both DHA and EPA levels in the body.)

The study authors believe these results hint that omega-3 levels in the blood may not indicate how much EPA and DHA is reaching the brain. According to OmegaQuant's Dr. Bill Harris, that's to be expected because of the blood-brain barrier, which carefully protects the brain by letting only certain compounds in from the blood, potentially making it harder for some nutrients to reach the brain.

"Therefore, future research should strongly consider whether a dose of 2 grams daily of omega-3 is enough to find benefit for a disease like AD or whether even higher doses should be administered," Dr. Harris explained. "This may be especially true for those who have known risk factors for AD, such as carrying the APOE4 gene variant. It appears that these people may be less able to transfer DHA from the blood to the brain than those who don't carry the gene."

Dr. Harris was not an author on this study; however, OmegaQuant conducted the fatty acid analysis.

As for the researchers, the results of their study were sufficiently intriguing to attract funding for a larger trial for which recruitment is underway. They plan to follow more than 300 participants over a two-year period to examine whether high doses of omega-3s can slow cognitive decline in the carriers of the APOE4 gene.