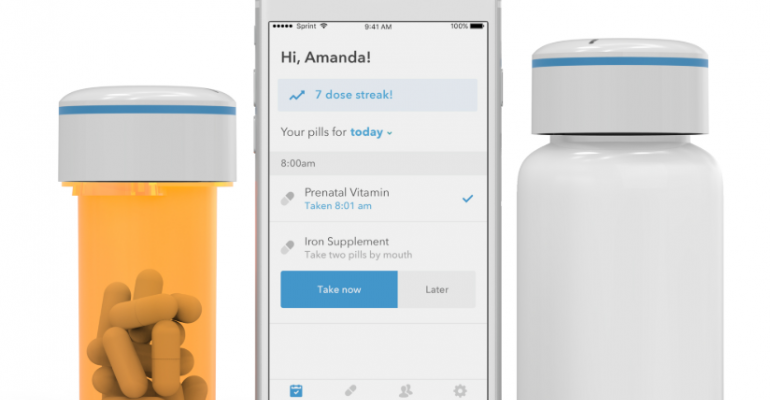 Pillsy, the makers of a “smart” pill bottle cap that counts doses taken and interfaces with an app for reminders, has launched a supplement subscription under Stride Nutrition. We talked to CEO Jeff LeBrun about what these enabled bottle caps could mean for supplements.

Rick Polito: What problem is Stride Nutrition setting out to solve?

Lebrun: If you look at any type of preventative medication that doesn't have like an immediate impact, the average retention after a year is always under 20 percent. I have to imagine supplements are probably even worse. I think there's just a ton of room for improvement in terms of getting people to make it a habit and stick with it, and, if you're a brand, to stick with your products. There's the coaching with the bottle. They can keep their history in the app. Instead of just selling capsules and tablets, it's an experience and a service. Nutrition as a service might be kind of a buzzword, but any type of tech is taking something that’s sold as a one-time purchase and turning it into an experience or service.

You're launching with a multivitamin, omega-3s and probiotics. Are there other supplements in the pipeline for you?

Yes, absolutely. We have a pipeline: a prenatal and a nootropic, and then some others. But we wanted to start with some of the more ubiquitous products that are out there. It is based on our initial market research that there's a lot of people that aspire to take supplements, but never get in the habit of doing so.

Which consumer demographics are you targeting in your first wave of marketing?

It’s a high-quality product. So, probably a little bit more affluent than average, but it's designed to have mass appeal. I think the supplement industry is often looking for smaller and smaller niches, and we're kind of doing the opposite where our approach is more saying we've got a good few products that are that work well, for a lot of people. The differentiator is more the experience and convenience. Like all technology, it skews younger, so baby boomer younger, and maybe even with a focus on Gen X. People that are in their 30s or 40s often, they're not income constrained; they've been using technology for 10 plus years. They realized they're not immortal and they should be taking a couple basic supplements, but for whatever reason, they just never really started doing it.

What did you learn from the Pillsy launch that you're employing with Stride Nutrition?

A lot of was just core technology stuff. So, you know, little things like making sure the Bluetooth connection works seamlessly. We have a lot of different reminder configurations. Some people want a lot of reminders. Some people really don't want any. They just want to track. We have data from thousands of people now and then feedback from hundreds. So we were able to really refine lot of little things.

People brought it up, but it’s like any health product. You have to make a decision of whether you feel comfortable having that type of information stored on a computer. We don't sell the information, but at the same time, you know, not everybody's comfortable with that. It’s really no different than, like ordering supplements from Amazon or Target. they gathering information too.

Is there an opportunity for practitioners to use your system to work with their patients?

Since we launched, we had a few people contact us about that. We're not using it in nutrition yet, but we have a portal for the pharmacies us to basically monitor compliance and then communicate with patients based on that. Nutritionist, or like dietary coaches that are really involved could do the same thing. The technology is there, we just haven't actually marketed it to that crowd yet. We’ve had some people ask us if they could test it out.

You are offering your own private label supplements, but are you looking at any brands to partner with?

We’ve had discussions with a few brands in the past. I've been approached by more since we launched, actually. So I'd say we're definitely open to that. It's a technology platform. And, you know, we'll never make every type of supplement out there. We probably won't even make very many to be honest. So we want to open a platform and make it available to others.

What do you see as the big opportunity for brands?

One thing I've been unable to find a lot of public information on what's important is the potential benefits of customer retention. Particularly in the online world, it's very difficult to drive loyalty. With a multivitamin or probiotic, when you're done with that product, you don’t subscribe. You go back, and you just type in multivitamin or probiotic in the search box and whatever pops up pops up. Every time somebody goes to do that, you're fighting to retain your customer. It's just not a great place to be as a brand. One thing we've seen people be excited about is just the ability to get somebody using your product and it becomes easier for them to continue using your product than shop for something else. It's a way to retain customers without having to continue to fight for every single person at a time.

Can retailers get involved or is this always going to be an online subscription?

We filed a patent on a method for selling this in a retail setting. You can imagine a situation where you could go to Target and buy a Pillsy-enabled supplement, and then subscribe and our apps could continue to credit the retailer after the initial sale. There are companies like Harry's Razors is doing that at Target. There are a couple other examples of subscription-type products are now being sold in brick-and-mortar retail. And I think this could enable that as well.