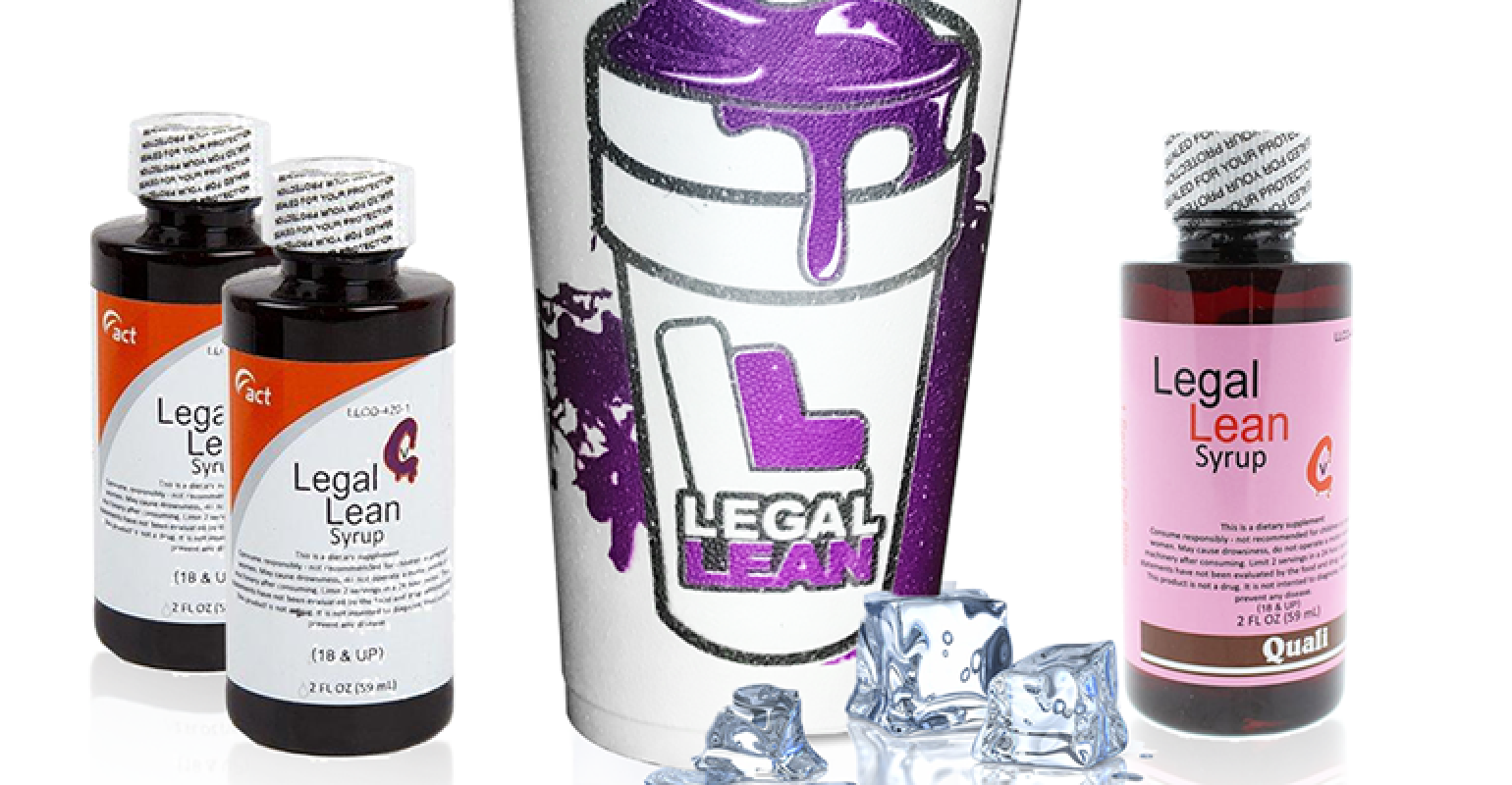 Street-drug brands illegally claiming to be supplements make blatant regulatory violations, but “whack-a-mole” enforcement has proven to be difficult.

DJ Screw liked his purple drank. The Houston producer created popular mixtapes of languorous freestyle rap that seemed to emulate the very effects of his favorite drink. Or drug, actually: a potent concoction of prescription-grade cough syrup, lemon-lime soda, and hard candy served in Styrofoam cups. An en­tire sub-genre of hip hop—“chopped and screwed”—would arise from DJ Screw’s aesthetic, and an entire subculture of street drugs would spawn in its wake.

“Purple drank,” as it’s known, ratchets up the sedation and euphoria of prometha­zine and codeine by amping up the dosage, up to 25 times the normal amount. Mixing in a Sprite and a Jolly Rancher creates a sweet syrup with a lasting mouthfeel that found its market in Texas and the South in the 1990s. While DJ Screw would ul­timately overdose on purple drank—also known as lean, sizzurp, or Texas tea—the drug had already secured a glamorous role in hip-hop culture that continues to this day. Even Lil Wayne got addicted.

Related: Inside Game: The dark side of sports nutrition

By 2011, lean was enough of a prob­lem to elicit a “Drug Alert Watch” from the National Drug Intelligence Center that sounded the alarm with law enforce­ment. The alert posits lean as similar to opioids, with woozy and swooning effects in the abuser. It warns of complications ranging from constipation, weight gain, and tooth decay to death. What that alert didn’t see coming was the easy route-to-market for a new generation of street drugs marketed as dietary supplements.

According to its label, Legal Lean is a supplement containing extracts of chamo­mile, lavender, valerian, rose hips, hops, St. John’s wort, skullcap, and kava kava. Mel­atonin and L-Theanine round out the for­mula. According to lab analysis by FDA, it also includes undeclared doxylamine, the antihistamine commonly found in Unisom.

NBJ’s repeated attempts to reach the marketers of Legal Lean went unan­swered, but the mainstream press has plenty to report about the company’s latest creation, Coco Loko. ABC News caught up with Nick Anderson, Legal Lean’s 29-year-old founder, in July 2017 at the product launch of its snortable cacao pow­der. Anderson claims to have brought the snortable chocolate trend to America after years of popularity in Europe. He spent $10,000 working on various formulations over several months before landing on a mix of cacao powder, ginkgo biloba, tau­rine, and guarana that delivers a 30-min­ute jolt of energy. “I didn’t consult with any medical professionals,” Anderson told ABC. “I basically just saw what they were doing in Europe. There are no health is­sues. It’s been out two, three years. Every­one seems fine. It says not to do more than half the container. I think everything is self-explanatory, there are warning labels on it, and I don’t think I would be respon­sible.”

Speaking to Rolling Stone about this lack of a safety review, a spokesperson for Legal Lean states that “we used research data on the market in Europe” and “we have yet to hear of any adverse health is­sues, and raw cacao products have been on the market for over two years.” Many out­lets would pick up the Coco Loko story—it’s snorting chocolate, after all—and raise red flags over possible complications with respiratory conditions like asthma, and the marketing of stimulants to kids.

“This is that Shark Tank mentality,” says Duffy MacKay, SVP of Scientific and Regulatory Affairs at the Council for Re­sponsible Nutrition (CRN). “Lazy Cakes, those melatonin brownies, came and went. Aeroshot, that no-calorie way to caffeinate, tried to make a splash. Or Four Loko mix­ing energy drinks and alcohol in a single can. These are edgy, exuberant, entrepre­neurial products, but sometimes they’re just not legal. FDA is getting better at jumping right on these.”

A guidance document from FDA’s Center for Drug Evaluation and Research (CDER) in the year 2000 sets the terms for enforcement around a class of products called “street drug alternatives.” Back in 2000, concerns focused on methamphet­amine analogs like MDMA, but the con­ditions apply to a much larger, growing set of products where the names themselves often betray their illicit purpose. FDA’s lan­guage is clear that street drug alternatives are unapproved new drugs and not dietary supplements. They often target minors, and often suggest benefits related to euphoria or modified psychological states.

Both of Legal Lean’s products fit the bill. “Out of the gates, you’re talking about a legal codeine syrup. That’s patently ille­gal,” MacKay says. “It’s especially offensive to claim its ‘legal’ by waiving the dietary supplement flag. Why not stick the knife in and twist it around? They’re breaking the rules, and there should be repercussions.”

In a statement to NBJ, FDA charts a history of enforcement along this street drug protocol. In 2007, the agency took Redux Beverages to task for a supplement called Cocaine and marketed as “speed in a can.” Similarly, Jennifer Gulla got a letter for Blow, available for sale on iloveblow.com in 2008. In 2012, Evol Nutrition sold piracetam-containing supplements like Sandman Party Powder Euphoric Drink Mix, which should be of particular interest to the nootropic set dabbling with pirac­etams in supplement products once again.

“The mechanism is in place here for FDA,” says MacKay. “You round up a bunch of companies, send the message, take a stance. The street-drug approach is one of the tools. It gives the regulator a defined path to call out a violation. If it looks like a drug and quacks like a drug, they can come after you.”

Of some indirect interest to students of the supplements industry is the recent work by the Center for Science in the Public Interest (CSPI) in identifying supplements targeting opioid withdrawal, and FDA’s warning on kratom in February 2018 as a clear opioid linked to respirato­ry suppression and death. There are street-drug attributes applicable to both.

The crackdown on Legal Lean was swift, if not definitive. As Coco Loko began to hit the internet in the summer of 2017, Senator Chuck Schumer held a press con­ference to pressure FDA toward action. The Senator has a tradition of doing this when it comes to stimulants and kids, having played a pivotal role in the Four Loko and Aeroshot matters, and the 2015 warning on pure powdered caffeine. “I can’t think of a single parent who thinks it is a good idea for their children to be snorting over-the-counter stimulants up their noses,” says Schumer in a statement. “This product is like cocaine on training wheels.”

The arguments against Coco Loko tie to its marketing as a narcotic-equivalent that glorifies cocaine culture, and the way this normalizes drug consumption in teens. But the challenge for Schumer is much broad­er. A caffeinated peanut butter from Steem in 2015 raised similar ire and the following statement: “Caffeine’s addition to everyday foods is a growing trend that could poten­tially pose health risks to Americans, espe­cially children.”

With Schumer making headlines, FDA was sparked to action, and the warn­ing letters arrived on December 11, 2017. Legal Lean was targeted as a street drug alternative for its name, its positioning in market, its claims, its packaging (all of the lean products online—and there are many beyond Legal Lean—look like cough syr­up bottles), and the presence of that dox­ylamine. Coco Loko was dinged for its claims and the novel application of stim­ulants for intranasal inhalation. Doctors consulted by reporters in covering the nov­elty of chocolate powder were particularly worried about it forming a paste that could block sinuses and cause infection. To add insult to injury, Legal Lean LLC was also hit with a federal trademark infringement lawsuit by Phusion Project, makers of Four Loko, for copying its name and logo.

“These are pretty significant outliers,” says Frank Jaksch, CEO at ChromaDex and an expert in the area of adulteration. “A lot of this kind of stuff gets nabbed before it ever makes it to a laboratory for testing. Economic adulteration is the big topic, not minor outlier events like this.”

You take the good, you take the bad, you take them both and there you have… the supplements industry, many would say. While systemic challenges to quality and reputation have existed in the market for de­cades—the adulteration that Jaksch’s men­tions sits front and center—Legal Lean does allow a different interpretation, one of progress with a timely and meaningful response to a novel, dangerous product of real consequence to public health. Says MacKay: “It’s progress. Over the last 10 years, there’s more and more pressure to not turn a blind eye. Even if you’re an in­ternet retailer, which was a free-for-all five years ago, there’s a new approach. Look at Amazon cleaning up the opioid products. Now these retailers have a reputation to protect, too.”

As this article goes to press, Coco Loko has disappeared from the market, but Legal Lean remains. Has it been reformulated? Did the trademark lawsuit scare the compa­ny more than FDA? Or maybe the pieces of the puzzle have just moved around a bit to obfuscate and delay the inevitable. Mean­while, head on over to legalleansizzurp.com for a 2-ounce bottle of Legal Lean for $12.50. While you’re there, you can enter a giveaway for free product at Legal Lean’s South by Southwest sponsor booth.

Also from that website, you can find this gem of a FAQ, all sic. “Q: Does it give you a buzz or makes u sleepy? A: Its like the real deal and will sit you down but 100% all natural.” It’s hard to believe that’s marketing copy for a supplement, but it’s impossible for the supplements industry to ignore the problems outliers like Legal Lean create.

It takes a village of regulators, journal­ists, watchdogs, politicians, and the industry itself to whack the mole, wherever it pops up next. Until that happens, DJ Screw’s legacy carries on. “I’m gonna screw the world up,” he once said. “It’s screwed up, but it ain’t finished.”

This article is republished from the “Dark Issue” of the Nutrition Business Journal, a subscribers-only chronicle of the latest sales and trend data matched to expert insight from insider voices in the nutrition industry. For information on purchasing subscriptions, market reports and data charts at end-of-the-year discounts, go to www.nutritionbusinessjournal.com or contact NBJ Business Development Manager Cindy Van Schouwen at  cvanschouwen@newhope.com (303) 998-9305.