HomeProducts and TrendsVitamins and SupplementsTonic bars serve up experience and innovation
Recent
Latest
Podcast: Innovation, sustainability and integrity at PCC Community Markets
May 18, 2022
Whole Foods' honors 30 companies with 10th annual Supplier Awards
May 18, 2022
EarthX Film Festival focuses on healthy food, sustainability
May 18, 2022
6 tips to promote consumer understanding of Certified Organic
May 18, 2022
Trending
Debra Stark’s light shines bright on natural products industry
May 10, 2022
Unboxed: 7 plant-forward ice creams to stock this summer
May 10, 2022
Getting ready for 2023: Trends for brands to consider
May 17, 2022
Hemp CBD industry struggles so far in 2022
May 10, 2022
Natural Foods Merchandiser
brought to you by 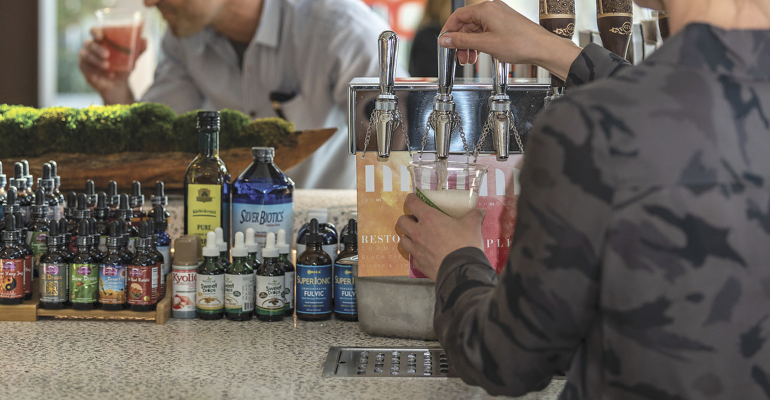 In-store tonic bars give customers the opportunity to acquaint themselves with functional shots while learning about the products you offer.

Erewhon Organic Grocer and Café calls the Tonic & Juice bars the heart and soul of its five Los Angeles, California, locations, and it’s easy to see why. Though each has its own distinct personality and loyal community, they all exude a sense of well-being and desire to help people live their best lives.

Much of this confidence stems from some 14 years of expertise serving made-to-order functional shots, a practice that expanded seven years ago to include merchandising RTD cold-pressed shots in retro-chic, 2-ounce glass bottles.

Related: In the Aisle: Sales of functional shots skyrocket in natural channel

Erewhon Market’s Vice President Jason Widener says that while most customers are already “very rooted in the health and wellness space,” the current popularity of functional shots is likely driving new customers to the stores.

“People are battling immune system problems and stress issues, and shots seem like an easy format for people [that] doesn’t cost much to get in and you are kind of buying into that thought process and investigating your body. I think a lot of people do come into Erewhon right now that are dipping their toes in it.”

Erewhon also makes good use of the brands on its shelves to infuse its shots. In addition to the E3Live’s blue-green algae, other examples include Kyolic Garlic, Jing Herbs’ Three Brothers and Quinton seawater. The same is true for the bottled shots—function-forward combinations that are easy to grab and go.

Got private-label supplements? Tips for a successful store brand
Aug 29, 2019