Recent
Latest
5@5: Plant-based milk beats conventional | Faux chicken sandwich wars | Eating fruits and vegetables lowers stress
May 14, 2021
Whole Foods, Amazon Fresh, FreshDirect step up distribution from AeroFarms
May 14, 2021
Secret shopper: How can I find organic skin care?
May 14, 2021
Weigh in: 9 ways to encourage trial without demos and sampling
May 14, 2021
Trending
Secret Shopper: What is reef-safe sunscreen?
May 26, 2020
How Vegky founder Thomas Hong built enough brand awareness to get into Walmart
May 13, 2021
Think globally, stock locally: Why it's time to represent and bag the 'ethnic' set
May 13, 2021
Education and customer service sell sustainable seafood
Apr 02, 2021

Xsto Solutions, along with partner, Kappa Bioscience, has developed a new testing method to measure the amount of trans versus cis isomers in K2 MK-7. A growing body of clinical evidence clearly demonstrates vitamin K2 MK-7 is essential for bone and heart health as well as protecting the arteries from calcification.

Quality testing of K2 MK7 is crucial because while both the trans and cis are absorbed into the blood, K2 MK7 as found in nature is 100 percent trans. As with K2 and other nutritional ingredients with trans and cis isomers, the trans form is biologically active while the cis isomer is not. Xsto and Kappa created this new testing method following the popularity of K2 MK-7 and the growing science on how the body absorbs and utilizes this key ingredient.  K2 MK-7 is the preferred vitamin K because of its long half-life in the body and strong base of clinical support.

“As the supplier of K2vital, which is 98 percent all-trans K2 MK-7, we believe this testing is imperative. The market is saturated with K2 MK-7 products that have such an extremely low trans count, making them essentially useless to the consumer. We want to offer the market a way of quantifying the K2 MK-7 product they are buying so that the end user receives the benefit of supplementation, “ explains Francis Foley, president of Xsto Solutions.

Below is an example of the test using K2 MK-7 powder samples taken from the largest suppliers of K2 on the market today. 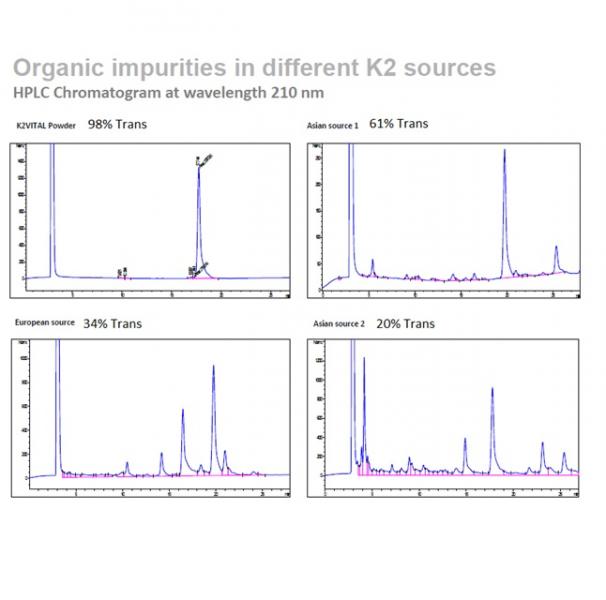