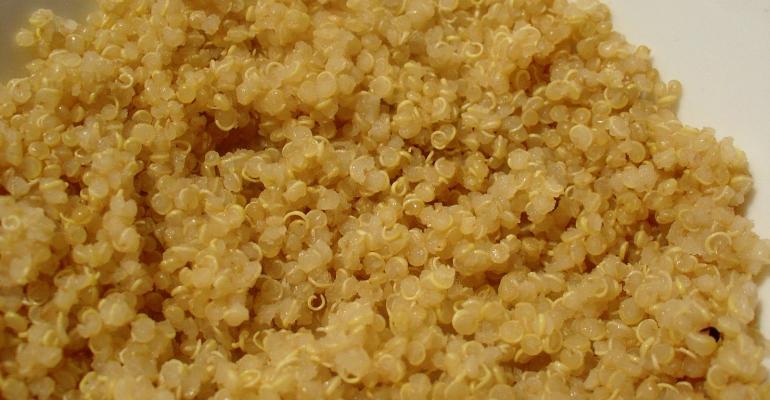 Funded by a $1.6 million grant from the National Institute of Food and Agriculture, researchers are testing more than 1,000 quinoa varieties under a number of Washington farming systems and bioregions.

Entering the quinoa greenhouse on the Washington State University Pullman campus, the first thing you notice is the color. Row after row of tall plants grow in a shifting rainbow of yellow, orange, rose, purple and green. The multihued nursery is the hub of an international research effort led by plant breeder, Kevin Murphy. Here, under bright lamps, the tiny seeds of a future industry have taken hold with gusto.

Quinoa (pronounced KEEN-wah) is just the latest agricultural plant to be studied at WSU and one that has captivated the world with its powerful package of protein, phytonutrients, and gluten-free status. The university is leading research into the seed’s moxie as a healthy food source, an ally in fighting world hunger, and a potentially profitable crop for growers in the Pacific Northwest.

“Washington is fortunate to have a climate conducive to the production of the highest quality quinoa … but the industry is still in its infancy,” says Murphy, assistant professor in the WSU department of crop and soil sciences.

Quinoa is sensitive to environmental variations, changing its growing patterns in response to small differences in moisture, temperature, and soil conditions. In its native habitat in the Andes, that adaptability has resulted in hundreds of distinct varieties of Chenopodium quinoa. Revered for its ability to thrive where water is scarce and soil so salty little else would grow, the Inca called quinoa “chisaya mama” or the mother of all grains.

Today, U.S. consumers are having a love affair with the ancient grain. Quinoa imports have soared, rising from about four million pounds in 2007 to 73 million pounds in 2013. Cost has also skyrocketed as producers can’t keep up with international demand. All of which has attracted the interest of Pacific Northwest growers.

According to WSU dietician Janet Beary, quinoa is an easy-to-cook grain substitute that contains all essential amino acids making it a complete source of protein. It is also rich in magnesium, iron, copper, phosphorous, calcium, fiber and starch.

Murphy points out that WSU has a full-spectrum approach to quinoa and alternative crop research. WSU food scientists are investigating methods of processing and preparation; agronomists are working around the world to learn how quinoa will grow under a wide variety of conditions; and social scientists are inquiring about the potential for cultural adoption of quinoa as a substitute for corn.

“We’re also working hard to make sure we do right by the Andean farmers who are the source of this grain,” Murphy says. Murphy and his colleagues from the Andean countries are looking at fair trade policies and plant identity protection to ensure that farmers reap their share of the quinoa boom.

Funded by a $1.6 million grant from the National Institute of Food and Agriculture, Murphy and his team are testing over 1,000 quinoa varieties under a number of Washington farming systems and bioregions. Collaborating with local growers who plant quinoa test plots, he has demonstrated that the climate and soils of the state are well suited to quinoa cultivation.

The goal of the program is to develop quinoa varieties adaptable for all regions of the state. For example, trials in western Washington show the need for plants resistant to downy mildew and pre-harvest sprouting. In the central Columbia Basin, heat tolerance is important. On the eastern Palouse, Murphy’s team is searching for varieties that thrive without irrigation.

A significant challenge in developing quinoa’s full economic potential in the Pacific Northwest is the lack of a processing center. Quinoa is coated with a bitter soapy substance, called saponin, which is inedible and mildly toxic but can be removed during processing. In an effort to combine research and education, Murphy is looking to establish a prototype processing facility on WSU’s organic teaching farm in Pullman. The “farm-to-fork” facility would include a food lab where students and faculty from WSU’s extensive food science program could develop new quinoa-based recipes and products.

Once this critical link in the quinoa production chain has been established, Murphy says the results of the research program “will have an immediate positive impact on current and future quinoa farmers of Washington State. We are well placed to establish the Pacific Northwest as the premier quinoa production region in the U.S.”