Who wouldn't want GMO labeling in the U.S.? 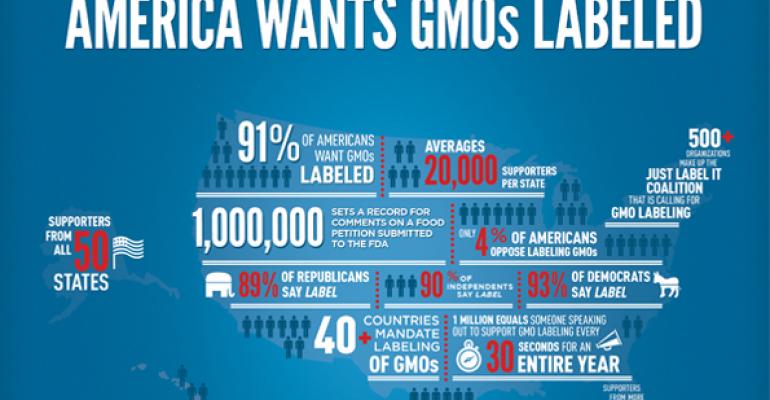 Why, in this nation of &quot;transparency&quot; and &quot;individual freedom,&quot; does there seem to be&nbsp;something&nbsp;out there that wants to keep grocery stores&#39; doors as frosted and opaque as possible?&nbsp;

One thing true about the GMO movement is that not everyone is convinced genetically modified food is dangerous or bad to eat. It's important, though, to keep the scope of the question in focus.

We are not debating whether GM food is good or bad.

What we are debating is whether American consumers have a right to know the GM status of the food they put in their bodies.

Why, we wondered at newhope360, in this nation of "transparency" and "individual freedom," does there seem to be something out there that wants to keep grocery stores' doors as frosted and opaque as possible? Who wouldn't want consumers to know—that they might make their own decision?

Dave Murphy, executive director of Food Democracy Now!, a grassroots movement of more than 650,000 farmers and citizens, offers a somewhat sobering answer to that question. Upon hearing that major food producers were meeting to discuss GMO labeling at the Grocery Manufacturers Association (GMA) in Washington in mid-July, he offered this in a press release widely circulated around Facebook:

“American consumers have a right to know what’s in their food, and it's time that Monsanto and the GMA stop hiding those facts and America’s large food manufacturers endorse the labeling of genetically engineered foods.

Polls have consistently shown that more than 90 percent of Americans support GMO labeling. It’s time for the hypocrisy on genetically engineered foods to end in the land of the free and the home of the brave and we urge the Grocery Manufacturers Association to stop opposing GMO-labeling nationwide.”

We caught up with Murphy after the meeting and asked him what he thought the results of the conference were, and what would happen next. Here is what he said:

"The Grocery Manufacturers Association is moving forward with their efforts to kill GMO labeling in the U.S.," Murphy said. "Rather than heed the calls of millions of American consumers to offer basic transparency in the market place, the GMA is encouraging their members to spend millions of dollars to defeat a citizen-led ballot initiative in Washington state, like they did with Prop 37 in California."

Officially at least, big biotech companies like Monsanto are promising to be more transparent. As The New York Times reported on July 28, companies are pledging to create a website that will answer "virtually any question posed by consumers about genetically engineered crops."

The site, GMOAnswers.com, will be run by the Council for Biotechnology Information, which includes Dow Chemical, DuPont, Syngenta, Bayer CropScience and BASF.

According to the Times, most of the corn, soybeans, cotton, canola and sugar beets grown in the United States contain bacterial genes that make the crops resistant to an herbicide, insects or both. The Food and Drug Administration has said that such genetic engineering does not make these foods materially different in a way that would require labelling.

To anti-GMO activists, this is not enough. In May, thousands of people in cities around the world "marched against Monsanto" and against GMO-friendly laws. Dave Murphy, the leader of Food Democracy Now! believes change will first have to come at the state level. In a quick sit-down, this is what he had to say:

newhope360: What is at risk for food manufacturing companies?

Dave Murphy: By joining with the likes of pesticide and biotech companies such as Monsanto, DuPont and Syngenta, food companies like Coca-Cola, Pepsi, Kraft, Kellogg’s and General Mills are jeopardizing the future of their brands as millions of Americans wake up to the fact these companies have willfully spent millions of dollars to deceive them about the contents in their food and deny them their basic democratic rights.

Any food company that does not support mandatory state and federal labeling of genetically engineered foods is increasingly placing their brand at risk of public exposure. If they want to deny us our rights, we will deny them their profits.

newhope360: What comes next in this battle or debate?

DM: Right now, activists across the country are working to pass Washington state's Yes on 522 ballot initiative to label GMOs, and follow up on the successes in Connecticut and Maine with bills in more than 20 other states.

Labeling of genetically engineered food is going to happen in the U.S.; this movement is not going away until we have a strong national GMO labeling bill. Giant food
companies and politicians have to ask themselves if they're willing to risk their profits, reputations and careers to protect an industry that already labels food products with every major U.S. trading partner.

It's time for America to join the rest of the civilized world and allow reasonable and common sense GMO labeling bills to become the law of the land.

How GMOs forced farmers onto a soil-ruining herbicide treadmill
Aug 14, 2013