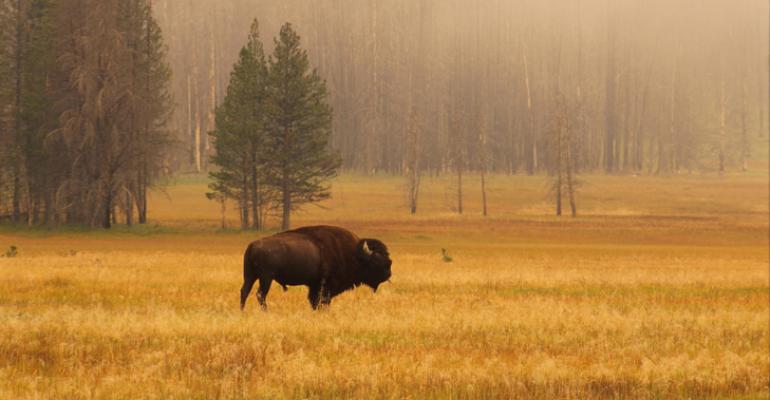 In order to boost the bison population, consumers should be eating more of it. That’s according to the National Bison Association, which unveiled its “Bison Hump Day” campaign at its conference in Big Sky, Montana. Association leaders hope consumers eating meat on Wednesdays, or hump days, will become a concept that is just as popular as Meatless Monday or Taco Tuesday.

“Chefs and consumers can begin to buy a greater variety of bison cuts, from steaks to roasts, and each Wednesday, know they are restoring and growing the bison herd across North America,” said Dave Cater, executive director of the National Bison Association.

"The first heritage animal is bison and, like so many others, we truly must eat them to save them,” said Adam Danforth, James Beard Award-winning author of two books focused on butchering livestock. “As North America's primal protein, bison’s clean, nutritious meat will support the health of citizens while responsible husbandry of the animals will regenerate landscapes and preserve farmland."

Teaching consumers how to prepare, cook and enjoy bison will be critical in achieving this new goal for bison restoration in North America.

“Bison Hump Day” is part of an overall goal to increase the bison population in North America to 1 million in the next 10 years. Including both wild and domestic herds, there are currently about 500,000 bison. Millions of bison—named the U.S. national mammal—once roamed and migrated throughout North America. But that number drastically dropped to around 1,000 at the turn of the 20th century. Herds today are spread across tribal reservations, national parks and domestic livestock producers.

Carter hopes the hump day campaign will be far-reaching, not only to increase people’s awareness of bison health benefits (bison meat contains almost 50 percent less fat than beef), but to restore an important cultural and religious part in the lives of Native Americans.

Restoring bison herds also has a positive ecological impact, according to Carter. “We think that more bison on the land is a good thing, not only for people that love to eat bison and people who love to raise bison, but for the land itself. This is the animal that helped shape the ecosystem of North America. We think that bringing more bison back helps restore acres of native grasslands and range lands,” he said.

Growing interest in the bison marketplace

The National Bison Association is reaching out to retailers and restaurants to help promote the new “Bison Hump Day” slogan. Carter pointed out that demand for bison is actually very high right now, so an effort to increase their population will help meet that demand.

“The challenge that we’ve got is we’re struggling to keep up with demand right now. We want to make sure that when people start looking for bison, they can find it. Bison Hump Day is part of an overall campaign for us to make sure that we can grow because of the customer marketplace, and also we’re reaching out to producers to expand their herd and to get more producers involved in the business,” Carter said.

Carter sees bison customers as pivotal players in reaching the goal of one million bison. “As ranchers, without that customer, we can’t be economically sustainable,” he said. “As we work with retailers and [the] food service [industry], and ultimately the end consumers, they’re going to help lead the charge to bring back more bison. As we bring back more bison, we’re going to bring more economic prosperity to some of the rural communities that are suffering right now because of the agricultural economy. We’re going to bring more healing back to the tribal cultures, and ultimately, we’ll play a critical part in regenerative agriculture.”

How to grow an EPIC business without fear [on-demand webinar]
May 19, 2016

Tanka Bar has a vision to return 1 million acres of land to the buffalo
May 25, 2016