HomeProducts and TrendsFood and BeverageUnboxed: 5 exceptional plant-based butters
Recent
Latest
Podcast: What brands need to get on shelf at Fresh Thyme Market
May 24, 2022
Natural Habitats releases Palm Positive+, A Reference Guide
May 24, 2022
The Planting Hope Company aims to prove gender equity leads to success
May 23, 2022
4 tips to get ahead of chemical concerns in packaging
May 20, 2022
Trending
Whole Foods' honors 30 companies with 10th annual Supplier Awards
May 18, 2022
Getting ready for 2023: Trends for brands to consider
May 17, 2022
Sponsored Content
The rise of sustainable business – eGuide
Sponsored Content
Natural beauty market trends
Jun 16, 2021 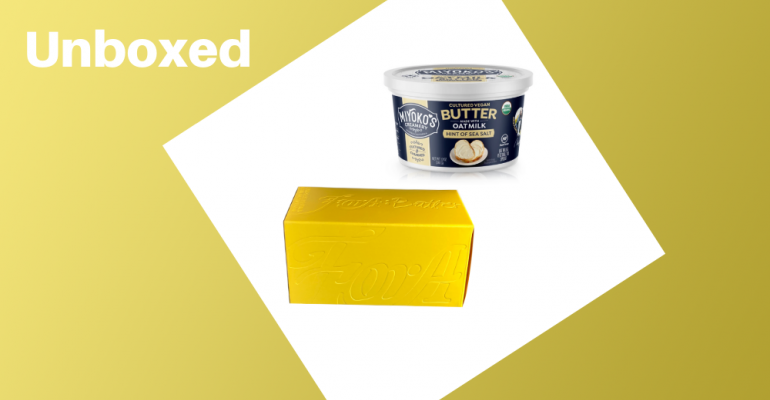 Start Slideshow ›
Move over dairy butter, these plant-based spreads taste and perform more like the real thing than ever before.

Plant-based butter might well be one of the next frontiers in plant-based foods and beverages, an industry that was worth $5 billion in 2019 according to data from SPINS and the Plant Based Food Association (PBFA). Some of the success of this exploding category, which grew by 8.4% in the United States in 2019 for a value of $198 million, can certainly be attributed to the growing number of flexitarian eaters—now more than one-third of the population according to the PBF—who seek to incorporate more plant-based foods into their diets for reasons that might include the environment or animal ethics, among others. Another factor is the emergence of a more wellness-focused society keen to avoid some of the saturated fats and cholesterol found in dairy butter.

Whatever the motives, much of the credit for the surge in vegan butters—similar to what has happened with other plant-based alternatives to animal-based products such as beef, milk and cheese—can be credited to new innovations in ingredients and food technology. They have made it possible to market products that are not only strikingly similar in appearance, taste and texture to regular butter, but that also perform the same way in terms of spreading, melting and even baking.

Furthermore, the use of different types of plant-based ingredients as the base for today’s vegan butters also allows customers to opt for products that are often healthier and more wellness-focused than ever before—not to mention with much cleaner ingredient lists. Nut-based alternatives have definitely been popular, but they are far from the only options, particularly as brands become more aware of potential allergy issues with these products. Other ingredients that are tantalizing consumers in this sphere are coconut oil, aquafaba, oat milk, cocoa butter, different seeds and the more classic sunflower oil.

These five plant butters are evidence of just how far plant-based butters have come in terms of ingredients and pure innovation.