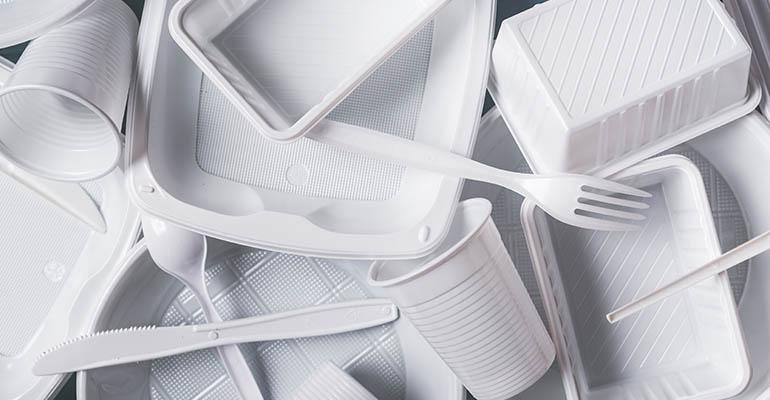 While straw and plastic bag bans are becoming more and more common in cities nationwide, these three states are working to end plastic pollution on a much larger scale—here's how.

We have a crisis on our hands. China no longer has the same financial and economic motives to continue accepting other countries’ plastic waste, and local U.S. economies are already seeing the repercussions. In some places, recycling operations have simply stopped in favor of burning recyclables or directing them to landfills. In others, bans on various types of single-use plastics are being fought for in court—and they're winning. Here are the ways in which the following three states are shaking up the status quo and making huge changes to the ways grocery stores, restaurants and other food-related establishments manage single-use plastic.

The Hawaiian State Senate recently advanced two landmark bills: the first aims to ban plastic foam containers from being distributed by fast food and full service restaurants, and the second would prohibit the purchase, use, sale and distribution of plastic items statewide. If the latter is passed by the Hawaiian House of Representatives, the legislation would establish a "plastic source reduction working group" that would, among other things, "Develop strategies to encourage reuse in the food service industry, such as reusable container incentive programs for customers." Notably, all of Hawaii's counties have already enacted legislation that virtually bans the distribution of single-use plastic bags.

California was the first in the nation to prohibit single-use plastic bags back in 2014, and then broke ground again by barring restaurants statewide from handing out plastic straws unless specifically requested by customers in 2018. Now, state lawmakers are debating a bill that would effectively phase out single-use, non-recyclable or -compostable items in the form of plastic utensils, cups, packaging and more by 2030. According to California Sen. Ben Allen, less than 15% of single-use plastic products in the state are currently recycled, and local governments spend millions of dollars in an attempt to reduce the extensive pollution as a consequence.

New York very recently became the second state to officially ban single-use plastic bags as part of a $175.5 billion budget deal. Individual counties and cities within the state now have the chance to opt into a 5 cent fee on paper bags, with 40% of the revenue from these sales going toward local programs for low- and fixed-income customers to buy reusable bags and 60% supporting the New York Environmental Protection Fund. Governor Cuomo's task force had previously estimated that over 23 billion single-use plastic bags are discarded each year in New York alone. Mike Durant, president of the Food Industry Alliance of New York State, was less pleased with the agreement. Durant explained to The New York Times that retailers will not only lose out on any profits made from the 5 cent fee, but will likely be confused by the opt-in provision for paper bags.

Our industry has been in the future-trash business for too long
Feb 25, 2019