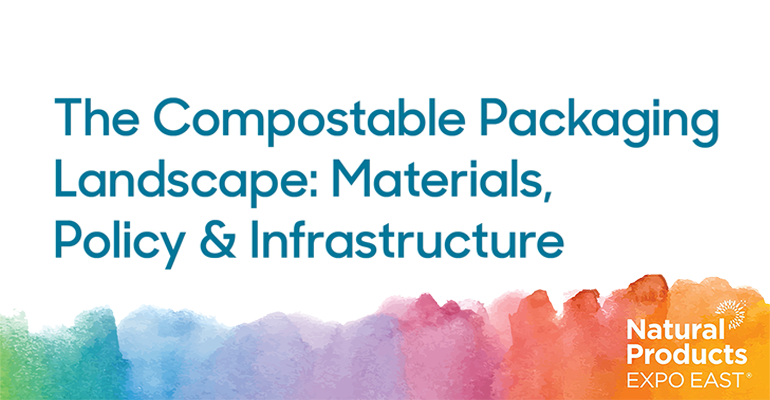 California, one of the world's largest economies, will require manufacturers to take responsibility for the full life cycle of their products and packaging.

For decades, she’s focused on what needs to be done with waste management, especially plastic pollution.

Related: More than one path for brands to create climate-friendly foods

“I’m working very hard right now to figure out how do we reduce waste and pollution at the source, keep the materials in motion, and regenerate natural systems,” said Sandborn during a “The Compostable Packaging Landscape: Materials, Policy and Infrastructure” panel discussion with Gayle Grindley, retail director at Grove Collaborative, and Reyna Bryan, president of RCD Packaging, at Natural Products Expo East.

Last year, Sanborn helped championed the California's SB 343 bill, which Gov. Gavin Newsom signed into law, for “truth in labeling” for recycling symbols on plastic and packaging products in California. The legislation regulates recyclability labels in California and prohibits the use of the “chasing arrows” symbol or any other recyclability claim on packaging unless it's recyclable to 60% or higher level by 2025.

This year, Sanborn spearheaded efforts to help California legislators pass SB 54 bill, the “Plastic Pollution Prevention and Packaging Producer Responsibility Act,” that shifts waste costs onto manufacturers. The extended producer responsibility legislation requires all packaging in the state of California to be recyclable or compostable by 2032, cuts plastic packaging by 25% over 10 years and requires 65% of all single-use plastic packaging to be recyclable during that time frame. It also creates a producer responsibility organization (PRO) to run a statewide collection-and-recycle program, with regulatory oversight, for printed paper and packaging.

“The bill is the first circular economy bill in the world that I know of,” Sanborn said.

Although Maine, Oregon and Colorado passed packaging rules before California, because of the Golden State’s massive economy—on track to be the fourth largest economy in the world, ahead of Germany—the legislation will likely have a profound impact.

“There are very few companies that can sell a material just to California, so they’ll make it for everybody,” Sanborn said.

What brands need to know for compliance

For brands to be in compliance with California's new law, they’ll need to check their labels to ensure every recyclability and composability claim is accurate.

“And make sure it’s very defensible,” Sanborn said. “Because if it's not, in California, you will not be able to sell it by July 1, 2025. Or you need to remove that claim.”

To do business in California, companies will have to join a producer responsibility organization by Jan. 1, 2024. Recycling Partnership, a nonprofit, and other organizations are still figuring out who’s going to set this up, Sanborn said.  The cost of building such an infrastructure is enormous.

Eco-modulated fees will used. When a company joins the producer responsibility organization, it will pay fees based on its volume and material types, and if it's recyclable, compostable or a contaminant, she said.

“Sometimes the size [of packaging] becomes a problem for our industry,” Sanborn said. “If it’s very, very small, our systems often can’t capture it and then it becomes a contaminant.” That increases waste management costs, so a business will have to pay more.

“The producer responsibility organization will work with you to try and redesign your product to get those costs down,” Sanborn said. “Our is goal is compliance in a cost-effective system with everybody working together.”

Ultimately, Sanborn’s goal is to have a system of stakeholders communicating about what needs to be done with material goods so less waste is polluting the planet.

“We’re back there running around with big catcher’s mitts, going, ‘What the heck is this,’” Sanborn said. “We can’t separate it. We can’t identify it. And now, we’re finally starting to talk. That’s huge.” 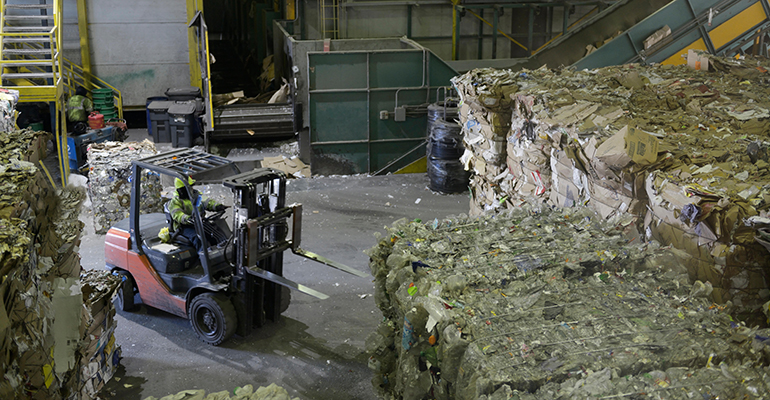 Next steps in the process

A working group to implement SB 54 is being formed, and the state of California is creating an advisory board that will make appointments, Sanborn said. Producers will “have a seat at the table” but won’t be able to vote since the board will be advising them. The conversation will include waste haulers, environmental NGOS, local governments and other stakeholders to gather insight into what plan is ultimately approved to comply with the new mandate, Sanborn said.

“It’s going to be a juggling match, where you throw stuff up, we’ll catch it and circle it around,” Sanborn said. From there, it will be recycled or composted “to get it back” to companies to make a new product. “That’s how we’re going to get to a circular economy,” Sanborn said.

Brands should visit a material recovery facility, also called a MRF, that is run by municipalities or a private company, suggested Reyna Bryan, president of RCD Packaging. The facilities sort and bale the materials before selling them. But it's much harder to sell the materials now.

“We can’t send things to China anymore. There weren’t any strong end markets for the materials coming into the system," Bryan said.

Not enough CPG business leaders understand how these systems operate or what the full life cycle of their packaging. It’s better for waste haulers when businesses put a product on the market that’s in packaging that is easy to identify, sort and sell.

Other matters to consider

As more companies move away from single-use plastics and transform their packaging, look for more fiber-based and other recyclable materials to be used. Look for new barrier coatings, inks, adhesives and combinations of biopolymers and cellulosic type materials to create functional packaging. And watch brands move away from flexible film plastics that get caught in rollers used by waste haulers.

“Our staff are having to literally risk life and limb to crawl out there five or six times a day,” Sanborn said. “We have to stop the entire line, take razors and hack at this stuff to get it off. If those rollers move and catch them, they could lose limbs. Our system is not designed for flexible film and they’re not recyclable.”

Look for more companies designing to meet ASTM D6400 biodegradation test standards that can be used on plastic, paper products, textiles, foam and food packaging, Bryan said. Eventually, Sanborn predicted, manufacturers will develop specific sorting for recycling materials, such as separating brown, green and clear glass so when it shatters it doesn’t contaminate everything. That’s already being done in Belgium where domed “recycling igloos” are in public places.

Retailers moving into this space

Grove Collaborative, the company known for delivering clean personal care, household cleaners, beauty and pet products, became the first plastic neutral retailer in the world, with a commitment to move beyond plastic with zero plastic waste in its products by 2025.

Grindley points to a 2018 EPA report that found only 9% of plastics are recycled.

“We all kind of believe in our heads, it’s plastic, just recycle it. But plastic is not infinitely recyclable. It can only be recycled two to three times, and then it breaks down enough that it's just trash,” she said.

That’s why Grove Collaborative is trying to use glass, paper and aluminum where possible, since glass and aluminum are infinitely recyclable.

“We haven't solved all of it, but that's not going to keep us from setting really aggressive goals,” Grindley said. “Because if you set silly, wishy-washy goals, then you get a silly, really wishy-washy response. So we’re going big and we’re not going to go home.”