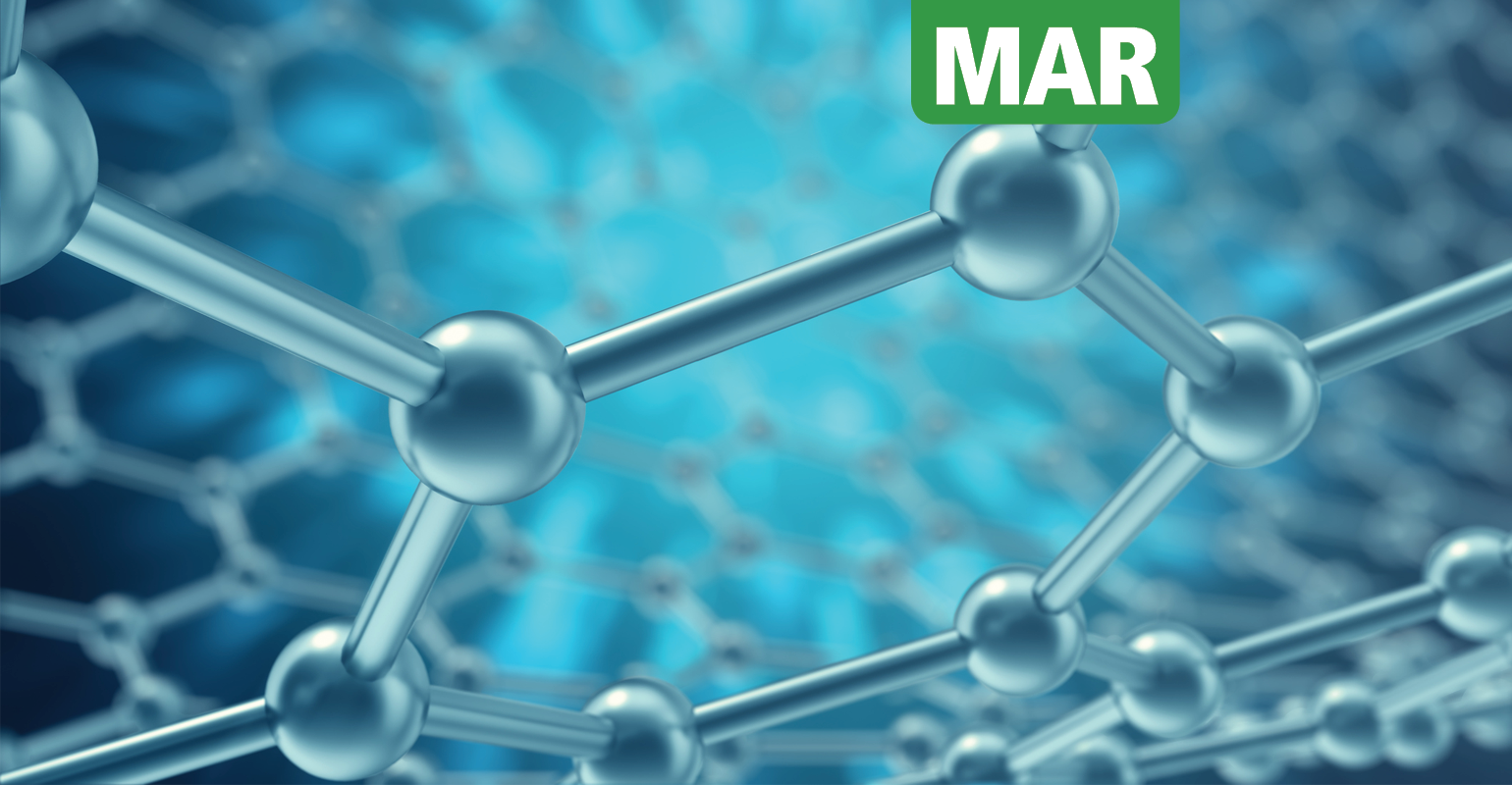 Nanoparticles in food are marked by an alarming lack of transparency.

Look at the width of one of your hairs. Now slice it 80,000 times. The width of each slice is now roughly one billionth of a meter, or one nanometer. A scarcely fathomable new definition of small. This is the basis of nanotechnology, the way forward in radically improving the storage and size of next-gen computers, in revolutionizing medical diagnostic tools, and the basis of nano sunscreens, which made a clear spray possible out of titanium dioxide and zinc oxide—UV-A and UV-B sunscreen without white nose paint.

Yet, while that transparency may have its beach day benefits, a lack of transparency has some shoppers wondering about the risks that can accompany the benefits. Especially when nanotech is in the company of GMOs and served, unwittingly, to the most sensitive audience imaginable: babies.

Last May, Friends of the Earth (FOE), an environmental activist group, tested a half-dozen top infant formula products and discovered all six contained nanoparticles. Nano-sized hydroxyapatite, a form of calcium, is used because it regulates acidity and dissolves faster in digestive fluids than larger bulk-sized hydroxyapatite. Nano titanium dioxide is used as a whitener and as an anti-caking agent, while silicon dioxide, used as a flow agent, was also found in half of the samples.

“For companies to use unregulated, unlabeled and potentially harmful nanomaterials in baby formula is irresponsible,” wrote Ian Illuminato, author of the FOE report.

The law does not require ingredient suppliers to declare the use of nanotechnology in the production of ingredients or if the ingredient is nano-sized. The FDA does not approve the safety of infant formulas before they can be marketed, but the agency does require baby formulas to meet nutritional requirements, be screened for pathogens, and the marketing/manufacturing enterprise must register and provide a notice before marketing a formula, according to Kantha Shelke, Ph.D., food scientist and principal at Corvus Blue, a Chicago-based food science and research firm.

An important point about nanomaterials is that it’s not just about size. After all, the definition of a nanoparticle is one between 1 and 100 nanometers, a rather arbitrary range.

“The reason the nano line of 100 came to be is from the birth of the industry,” says Chris Shade, Ph.D., president of Quicksilver Scientific, which produces liposomes and nano materials for supplement makers and marketers. “When they got down to a couple tens of nanometers, they wanted to distinguish it so people couldn’t make something 900 nanometers and say this was nano, too.”

Beyond size, what also matters is the form. Liquid or fluid nanotech materials “are mostly fine,” says Shelke. The report from FOE concluded that the needle-shaped nano-hydroxyapatite can penetrate practically any soft tissue—and are also difficult to guide out of soft tissues, hence could be potentially toxic.

“Nano hydroxyapatite, nano titanium dioxide, and nano silicon dioxide in infant formula should therefore be of great concern,” says Shelke. “They are potentially toxic if they enter cells. They are not allowed in cosmetics/personal care for children, so logically, they should not be used in baby food, or toothpaste, teeth whiteners and mouth washes, for that matter.”

Further, the European Union Scientific Committee on Consumer Safety concluded that needle-like nano-hydroxyapatite should not be used in cosmetics, and Canada restricts the use of any nanoparticles in dietary supplements in their Natural Product Number (NPN) paradigm.

FOE recommended the FDA enact a moratorium on new nanotech products, assess the safety of nanoparticles in baby formula, regulate nanoparticles as novel substances, extend the size definition of nanotech particles to up to 500 nanometers, and label products that contain nanoparticles.

“We need to ask whether the potential benefits of this technology outweigh the potential risks,” the FOE contends. “This likely differs for different uses of the technology. For example, as a society, we might be willing to take more risks to achieve medical advances, but for consumer products like sunscreen and infant formula, we need to ask whether we need this technology in the first place. Is it worth risking the health of our children for ‘benefits’ like new nanotechnology colorings, flavorings, and anti-caking agents in our food? With baby formula, infants may be at greater risk of suffering health harms from exposure to nanomaterials because of their more vulnerable physiology. Scientists have already found that feeding mice nanomaterials that are now being used by the food industry can cause liver and kidney damage.” Nano-sized nutritional ingredients are a double-edged sword. On the one hand, they absorb much more efficiently into the body’s tissues and cells. This makes them used ever more promiscuously by pharmaceutical companies, which appreciate the ability to target delivery or prolong the delivery of the drug compounds. (Another popular avenue for nano development at pharma is atomic-level diagnostics.)

On the other hand, their effects, interactions, cellular uptake, subcellular distribution and potential cytotoxic effects are poorly understood at this point. Because they are so small, they can pass through the blood-brain barrier—but to what effect? Also, their tiny size means they may stagnate in parts of the body where they could become pro-oxidants and inflammatory agents with no way out of the body.

For dietary supplements, there are no specific labeling requirements for nanotech nutrients. That means consumers are unable to choose for themselves whether or not they want to ingest such materials. In the FDA’s draft guidance for New Dietary Ingredients, however, nanotech materials demand a NDI filing to help ensure safety.

For supplements, nanotech is used mostly in the creation of liposomes. These are tiny bubbles with an outer shell comprised of healthy lipids and a hollow aqueous center that can be filled with a variety of substances. Liposomes protect nutrients from gastric juices and liver enzymes and can support uptake into the bloodstream. Their lipid membranes match up elegantly with those of cell walls, making for an easy drop-off of nutrients inside cells.

These compounds hold a great deal of promise in helping the body absorb nutrients, in particular larger molecules that are not fantastically bioavailable, such as curcumin, glutathione, vitamin C and CBD.

Liposomes, importantly, do not necessarily have to qualify as outright nanoparticles.

“Our thing is not about size but about the right structure so the body can deal with it correctly,” says Emek Blair, Ph.D., chief scientist and owner of Valimenta Labs, which supplies liposomal ingredients to a growing number of companies, including consumer and professional lines. However, he says his liposomes are in the 200-500nm size anyway, putting them above the arbitrary limit for the nanoparticle definition.

“I don’t use the word ‘nanotech’ because it’s not applicable,” says Blair. “Some of my customers will say it to help contribute to their messaging and think it’s sleek marketing. When you say something in marketing, it’s not necessarily compliant with regulations in mind. It’s conceptually correct, but it’s a little puffery.”

Regardless of semantics, Blair says the potential of liposomal ingredients—whether you call them nano or not—is great indeed.

“We’re not talking about an incremental difference, from 100 units to 110 units,” says Blair, who explained that the higher surface area of these particles increases delivery significantly. “The potential of nano is five, 10, 20 times—from 100 to 2,000.”

Blair says he has developed a liposomal glutathione product that will significantly change how people use the toxic avenger. “In three hours we can get to levels that other products can take six to 10 months to get,” he says. “It’s a good indicator of how we can deliver nutrients to the body.”

While Quicksilver Scientific unabashedly uses nano-sized particles as a sharp marketable difference for vastly improved nutrient bioavailability with its sublingual liposomal delivery format technology, Shade nevertheless is hesitant to use the word ‘nanotech.’

“My message to the nano industry is don’t call them ‘nanotech,’” Blair says. “It happens to be that this lipid-based medicine works in that size range, and that’s the size the body uses. What we see as an optimal range for uptake and safety is sometimes around and below 10 nanos, sometimes it’s between 50 and 100 nanos. This is very natural medicine for your body.”

Shade says Quicksilver is careful about its messaging to different groups. Physicians are more apt to get it and “don’t care” if you call it nano or not, while more naturopathic practitioners get more concerned with the “trigger word” of nanotechnology.

“We have to distinguish ‘nanotech’ from the phospholipid delivery that we’re doing,” says Shade. “I need to put out the counter story that this is not an issue.”

From Nutrition Business Journal's 2017 Dark issue. Get the full issue in the NBJ store.