HomeNewsIt's May—get on your bike!
Recent
Latest
6 tips to promote consumer understanding of Certified Organic
May 18, 2022
Sponsored Content
Balanced Health Botanicals Newsletter – May
Getting ready for 2023: Trends for brands to consider
May 17, 2022
EXPO VIDEO: How did a young sparkling water brand get licensing deals with Marvel and Disney?
May 16, 2022
Trending
Debra Stark’s light shines bright on natural products industry
May 10, 2022
Unboxed: 7 plant-forward ice creams to stock this summer
May 10, 2022
Hemp CBD industry struggles so far in 2022
May 10, 2022
Monitor: Consumer research on collagen shows how much education is needed
May 12, 2022

It's May—get on your bike! 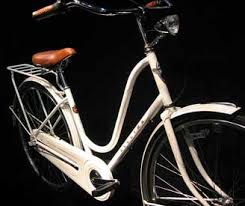 Did you know May is National Bike Month? Here in bike-centric Boulder, practically every month is Bike Month (in January bike paths get plowed long before streets). But for further inspiration, I just returned from a trip to Rome, Italy, where despite hard-core cobbled streets and traffic that would give the Dalai Lama heart palpitations, I saw a ton of people on bikes: parents and kids, business men, the Pope (OK, not really, but practically everyone else). Classic euro-looking commuter bicycles (like the Electra Amsterdam pictured here, my personal ride) were all over the city, and I admired the daring—and the unruffled Roman air—of those riding them.

Yes, you too can commute by bike—and look cool doing it! Check out this how-to commute by bike article from Grist. And to help shift those mental gears, here are some fun facts from this fabulous article on Eco Salon. Did you know ...

* The U.S. government will pay you to cycle to work?

* The percentage of U.S. students cycling to school or college is less than a third of what it was in 1969?

* That cycling is almost comically efficient? You’re getting around 3 times as fast as walking but burning the same amount of energy.