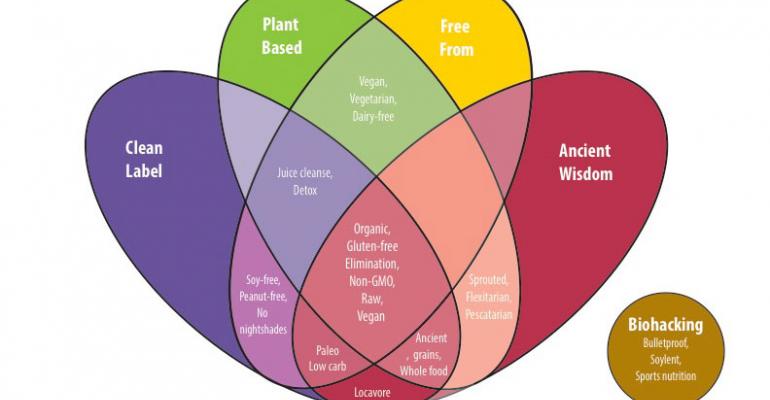 Products that hit the intersection of these four trends can be marketed to most consumers, while those that identify with specific trends trade potentially broad appeal for more dedicated consumers who are willing to pay a premium.

Take one look at the latest consumer surveys and it becomes apparent: We have become a nation of food tribes.

A full 44 percent of adults now say food restrictions, food allergies or avoidance of certain ingredients dictate what they eat, according to a 2014 Packaged Facts report. Of those, one in three is trying to get off sugar, one in four is on a high-protein diet and 6.5 percent are lactose free. Many are motivated not just by a wish to lose weight but, rather, a new lifestyle inextricably linked with their social circles and stances on environmental and animal welfare issues. Nearly one in three adults is trying to go gluten free; one in 10 millennials is vegetarian or vegan; and as many as three million people identify with the ancestral-health movement (paleo), recent surveys show.

The notion of people aligning themselves around diet is nothing new. “Humans have a seemingly innate desire to belong, and food preferences have always been a way to do that,” notes Marion Nestle, a food politics blogger and professor of nutrition at NYU. What’s different today is the sheer number of people belonging to a so-called food tribe—and the profound influence they’re having on the manufacturers and retailers that are being forced to respond.

The diagram below, from the 2015 NBJ Special Diets Report, offers one way to think about this. For the purposes of the report, we structured things around five dominant food tribes: gluten-free, paleo, vegan/vegetarian, raw and biohacking. But it helps to think about these as just the most recognizable among dozens of manifestations of four interconnected but distinct macro trends shaping the food industry: clean label, plant-based foods, free-from diets and ancient wisdom. (Biohacking, with its biochemical approach to nutrition, seems to exist in its own space.) 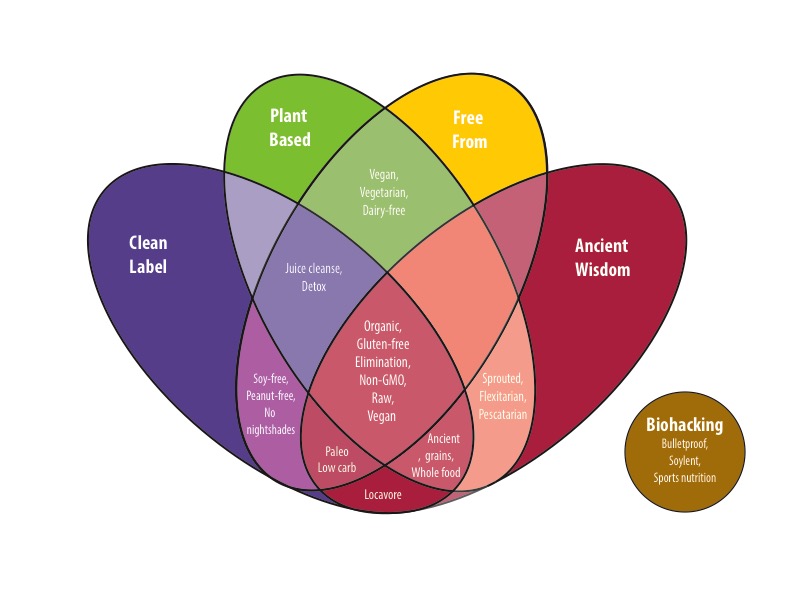 Products and label claims that hit the intersection of the four remaining trends can be marketed to all or most consumers. (Think: organic, non-GMO.) Conversely, those that identify with specific trends trade potentially broad appeal for more dedicated consumers who are willing to pay a premium. (Think: sprouted grains, paleo, local.)

There are certainly other consumer demands to consider. Sustainability and trust are two big ones. But those manifest in myriad ways when it comes to food purchases. Some consumers might prefer almond milk due to concerns about sustainability in the dairy industry, while others who identify as sustainability-minded might shun almonds over concerns about California’s water crisis. Then there will be those carbon-footprint shoppers whose primary concern is that the almonds were grown within 100 miles of them.

This is all by way of saying that food tribe motivations range from health to emotions to ethics to personal identities. It’s a complex but fascinating landscape, and one rich with opportunities for brands who are clear about whom they are serving and why.

What’s the rationale behind America’s top food tribes? How can companies best meet their needs? And—most importantly—which are fads and which are here to stay? Find out in the 2015 NBJ Special Diets Report.