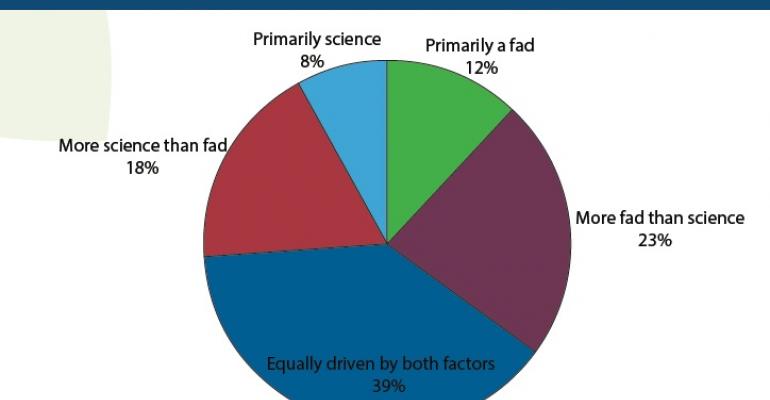 Slowing growth of gluten-free sales and increasing criticism of the gluten-free movement has some analysts wondering if a backlash is in the works.

Five percent of shoppers today identify themselves as gluten free, according to a new survey conducted by Nutrition Business Journal, and sales of gluten-free foods are continuing to grow in both the natural and mass-market retail channels.

But the rate at which sales are growing has slowed each year since 2012. Over the past few years, the gluten-free movement has also increasingly been scrutinized and criticized by researchers and media, and has become a punchline in Hollywood. All of this has left some analysts wondering whether a post-fad crash—like what occurred after the low-carb craze in the early 2000s--is bubbling under the surface.

“You think about what’s been driving a lot of growth, and it’s not me and diagnosed celiacs; it’s the faddish category,” says Keith Kohler, a diagnosed celiac and business strategist at K2 Financing, in the new 2015 NBJ Special Diets Report.

Big companies, however, don't seem to be anticipating a backlash. Earlier this year, Pizza Hut enlisted Udi’s to supply the crust for gluten-free pizza. General Mills is making five of its popular Cheerios flavors gluten free, and there’s even a gluten-free Girl Scout cookie now available.

As the market continues to mature, other analysts predict that growth will come from great-tasting products that also have nutritional value, and smart brands who differentiate with strategic partnerships.

Learn more about the gluten-free landscape and where marketers, analysts and food manufacturers think it’s headed in the 2015 NBJ Special Diets Report.

The evolution of celiac disease and the gluten-free diet
Mar 26, 2015