HomeNewsCan this startup get people to make tempeh at home?
Recent
Latest
New Food Order: Learning from our regenerative past
Nov 23, 2022
COP27: Finally, the food system might change for the better
Nov 23, 2022
Securing capital in 2022: How to survive and maybe even thrive
Nov 22, 2022
Sponsored Content
Inside Organic: Organic ingredients and messaging to today’s consumer – webinar
Trending
Sustainable packaging laws: Changes every business should know
Nov 16, 2022
Sponsored Content
Food tech in natural products – Free report
13 snacks that embrace nutrient-dense, plant-based ingredients
Nov 09, 2022
Sponsored Content
The new state of plant based – article
Esca Bona
brought to you by

Can this startup get people to make tempeh at home? 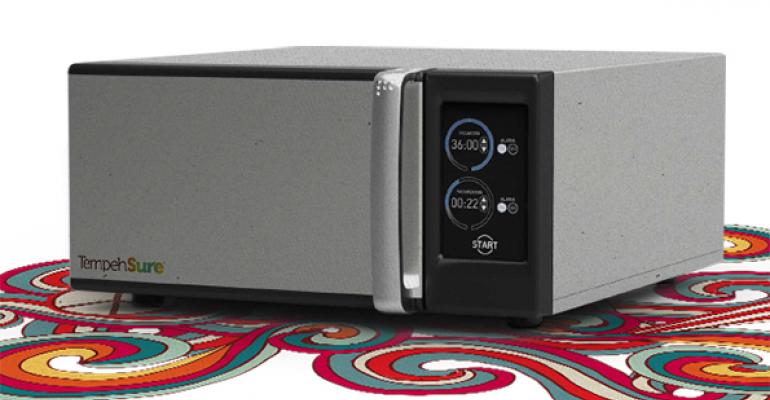 TempehSure is targeting two markets with its DIY tempeh maker—chefs and foodservice providers as well as consumers.

One of the many highlights of the inaugural Esca Bona event in 2015 was the opportunity to dig deep into some game-changing startups during a workshop called the FIX. The goal of the FIX was to connect these small brands with the experienced thought leadership that is able to help them tackle their most pressing problems.

Eight promising companies identified their greatest pain points and were paired with a rock star group of experienced business leaders who could provide them with advice and mentor them toward success.

TempehSure was one of the eight FIX participants, offering an at-home tempeh preparation system with the goal of making the production of this meat alternative easy and convenient for the home cook. At the time of the conference, the TempehSure starter and machine was available and ready for sale. TempehSure's launch challenges included encouraging people to first embrace this plant-based protein and meat alternative, and then driving the at-home preparation of tempeh.

At Esca Bona, the FIX team suggested that TempehSure focus on their "core" tempeh-loving group first--with the DIY, vegetarian chef and foodie communities as low-hanging fruit--since consumer behaviors are tough to impact. They also suggested focusing on the tempeh making experience rather than the Tempeh Sure machine itself.

We recently caught up with John Silva, the CEO of TempehSure, and asked him a few questions to see how the company was faring post-Esca Bona.

New Hope Network: Would you provide a quick update on how TempehSure is doing, three month later?

John Silva: Based on the PRO model, which is ideal for culinary pros and artisanal foodies, we have progressed to a second model for personal and home use which is about half the size and even easier to use. We will be at Natural Products Expo West this March as an exhibitor and will have both models on display, serving tempeh from our system with pricing. Our initial sales will be launched via KickStarter.

New Hope Network: Do your challenges remain the same, or do you have new ones to add to the list?

JS: We are modifying our plans as we go since we have a new product platform we are bringing to market. We have been solving for those plans rapidly as we go.

New Hope Network: Did you find any of the content from Esca Bona or your FIX session useful? If so, what?

JS: The group was emphatic that we go to market through chefs and the culinary/foodservice angle (which affirmed what our intentions were), and that is what we are doing but now with an additional model. We intend to help energize the plant-based protein market from the consumer angle as well via a base of influencers and the crown funding platform.

JS: An additional round of investment and positive testing of other elements within our system such as the TempehSure Starter Culture and multiple bean/legume suppliers.