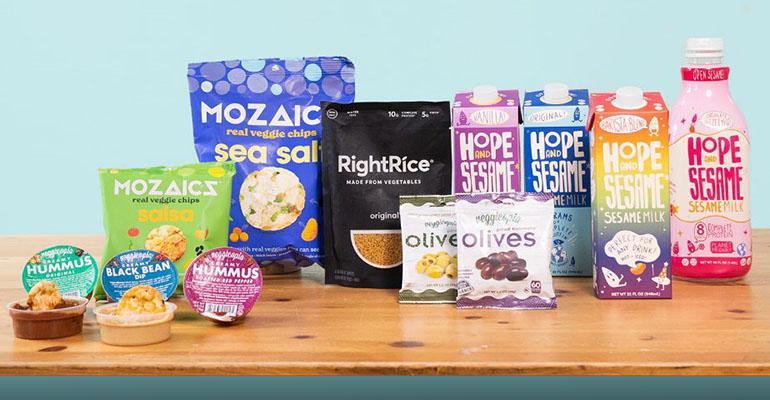 Co-founder Julia Stamberger set out to prove that female leadership 'isn't about tokenism, but about the return.' Natural products companies don't do enough.

Being a female entrepreneur isn't easy. For Julia Stamberger, CEO, chairman and co-founder of The Planting Hope Company Inc., creating a more inclusive company meant remaking her board of directors into an all-female lineup prior to going public on the TSX Venture Exchange in Toronto (ticker: MYLK.)

"Despite having a number of co-founders who are white men, we thought it would be better culturally for the company to have an all-women board and all-women C-suite, to prove that women-run businesses can perform exceedingly well because it's the performance that will create real change," Stamberger says.

Then it becomes "not about tokenism, but about the return," she says.

That not only leads to better equity within the entire company but targets a key buying demographic, since women make up most buyers who initially purchase better-for-you products. 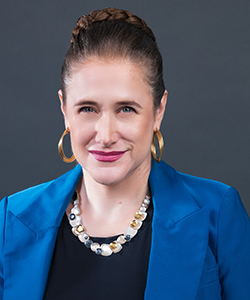 To make that happen, natural product brands need to hire more women and treat them better.

"We are getting top women in their field who want to work here [at Planting Hope] because they are so sick of what they've experienced at other places, of people telling them, you'd better not have a baby while you're here—and that's coming from better-for-you food brands," Stamberger says.

It's a commonality she's found throughout her career, as a driven female who has faced uphill battles while trying to scale or start companies.

That's why Stamberger—who founded GoPicnic Brands Inc. and worked for United Airlines as a business development manager for New Ventures and Investments—is being deliberate in how she's financing and scaling The Planting Hope Company.

"I've experienced a lot of misogyny, especially from male investors and raising money for different companies," she says. "It's kind of astonishing and it took me a while to recognize it because I never expected it. There's a real discounting of abilities to manage financial items." Instead of letting her run the books, male executives pushed her into products and marketing, she explains.

Stamberger, a serial entrepreneur, earned an MBA from Northwestern University's Kellogg School of Management, in 2016 co-founded Spinning Wheel Brands LLC in 2016—now called The Planting Company Inc.—with Matt Coffer, Todd Bamberg and James Curley. Stamburger partnered with Canadian investors in May 2021 as the brand joined a Canadian shell company, Campio Capital Corp. The combined venture became The Planting Hope Company Inc. in November 2021 so it could list on the TSX Venture Exchange, the venture arm of the Toronto Stock Exchange.

While the corporation is headquartered in Toronto, Ontario, Planting Hope Brands LLC, its wholly-owned U.S. subsidiary, is located in Chicago, Illinois, as is the company's operations. With 42 SKUs, Planting Hope's brands—Hope and Sesame, Veggicopia, Mozaics and RightRice— are available at more than 11,600 retail doors in North America.

As it prepared to go public, Planting Hope remade its executive board and C-suite so all the seats were occupied by women.

That's something top of mind, even as Stamberger looks to scale.

In mid-May, Planting Hope Brands entered into a $2.5 million non-dilutive revolving line of credit agreement—a type of financing where a business doesn't lose any equity in the company—with CircleUp Credit Advisors LLC, to help it scale distribution, sales velocity and inventory production. 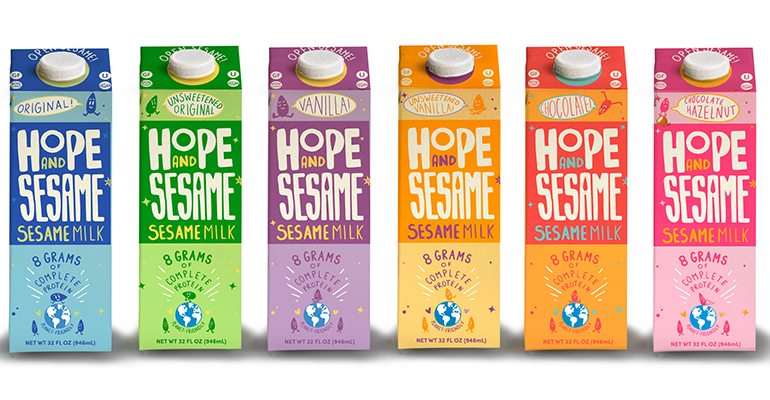 Why did you use sesame as an ingredient?

Julia Stamberger: The plant milk category has been growing like crazy and it continues to scale.

Sesame is a low resource-intensive crop that's farmed in really poor areas of the world where it's dry and arid. It can be used as a cover crop and rotated with cash crops like cotton because it renews the soil since it's so nutrient rich.

How did you get into sesame milk?

JS: It took us a long time to crack the code on sesame. It's a really hard product to work with because it's such a rich oil seed.

Sesame is naturally resistant to pests so it doesn't require herbicides or pesticides to grow because of the bitter acid in the hull of the seed.

When you have sesame seeds on top of a hamburger bun, it's out of the hull. To get the full nutritional value, we had to use the full hull. But we had to figure out how to extract that bitterness so we could have an effective, unsweetened process. We developed organic compliant bitter blockers that float that note over the tongue.

Sesame is now one of the top nine allergens that has to be flagged on packaging in 2023. How are you handling that aspect?

JS: People who have sesame allergies can be treated with small amounts of the protein to become tolerant over time. Previously, there was no way to deliver that protein to them in a measurable sense, unless you just give them seeds and that's not really convenient.

We've found a slew of hospitals, immunologists and allergen programs are now using sesame milk to treat those allergies because you can measure the amount of protein and give it to patients in a way that's easy to consume.

What advice do you have for other female entrepreneurs?

JS: Be true to yourself from day one and the goals you're trying to achieve. Look frankly at those goals and design the capitalization strategy to deliver. In short, don't just take money from anybody. That can put you in a spot where you lose control. And don't expect to keep control just because you performed well. That's not how the game works.

For us, it was going public. That's not a route for everyone. There are other ways to do it, like working with investors who value the values of the company and aren't just pushing for a return.

What else do you suggest?

JS: Be focused on the financial fundamentals. It's critically important, especially when it comes to the areas that impact your cash flow.

Pay attention to inventory. You can tap a lot of money into inventory so make sure you can move that. Understand trade marketing. Make sure you know what you're agreeing to in your contracts and what those checks are actually going to look like when they come back from the distributors.

Make sure you're spending money in very responsible, ROI-focused ways that you can measure and account for and then tweak your strategy.

How did you initially secure financing?

JS: Initially, our financing was very selectively from individuals and family offices. We took no institutional capital and that was quite intentional. We wanted to retain control of our destiny.

Why did you go public on the Toronto Stock Exchange?

JS: We opted to go public on the Canadian markets because it offers a junior exchange. We could never be NASDAQ eligible at an early stage because you need a big war chest of capital and it's a very long process. In the junior exchanges, you can get your training wheels.

What impact did that have?

JS: We were able to remake our board of directors and very intentionally select an independent board of all women because women are 90% of the customer base that makes early-stage decisions to bring in better for your products.

It also helps that diversity and representation is one of our three core pillars, along with nutrition and sustainability.

Why is hiring more women important to you?

JS: I have three kids. They are 2 ½, 7 and 9. I've had them all while running companies, raising money and building them. There's a real misogynistic look at pregnancy and childrearing.

I've been told to use motherhood as an excuse for things. But my kids never entered the equation since my husband handles "the childcare" since we switched traditional roles. I've been told to get a nanny.

When I was nursing and had to pump [my breast milk], there was an investor at a retreat who told me I shouldn't leave the meetings to pump and should be more focused on the meetings. Meanwhile, this investor had a B Corp certification.

Wow. How has that influenced your hiring practices?

JS: Don't leave hiring to a third-party manager. Do it directly yourself. I'm the CEO of this company and I spend about half of my time hiring people during the past couple of months. I'm sure there are great recruiters out there, but our experience has been recruiters do not evaluate people in the same way you do within your organization. It is worth the time to take a very hands-on approach.

How do you vet job candidates?

JS: We take a very tactical, team-driven approach to narrowing the funnel. We use LinkedIn's [Video Intro] for all of our hiring. When someone applies for a job and their resume looks good, we'll invite them to answer two questions with a video interview that's up to four minutes. It's a very short but extraordinary tool.

At least 50% of the [applicants] will never respond to this request, so we know these people aren't interested in the job.

A decent percentage of people will refuse to do a video. They'll say things like, "If you're willing to do a face-to-face interview but I'm not going to do anything on a recording." Then we know they aren't a cultural fit.

When we do get the videos, it's amazingly revealing. For most people we've hired, we can tell in the first 10 seconds of the video if they're going to be a fit or not. People will tell you amazing things that really help with that.

We can cut hundreds of candidates down to the top two to six prospects before we start investing time in them. We've made some really great hires this way.

What questions do you ask?

JS: LinkedIn offers a pre-set menu of 16 questions for video screening. The candidate can record up to a 2-minute response for each one. The two questions we find to be most insightful:

Why do you want to work here? Where do you see yourself in 5 years?

Frankly, it's often less about the answer itself than how they address the question and the process.

What happens after a candidate submits the LinkedIn video?

JS: We throw it on Slack with the individual's resume, LinkedIn link and the video questions. We attach a tracking spreadsheet to that Slack channel so everyone can add their thoughts. Then we decide who to screen. Rather than putting everybody on an hour-long Zoom where the candidate may or may not be screened thoroughly. We've found it to be a really efficient process.

What's next for Planting Hope?

JS: Right now, it's about execution. It's increasing distribution. It is getting into foodservice areas where marketing within these outcome channels also increases awareness for the brands.

For instance, we've got a great partnership with Cava [fast casual] restaurants. We hear from people all that time that's how they first encountered it and then they went to the grocery store to buy it for their home.