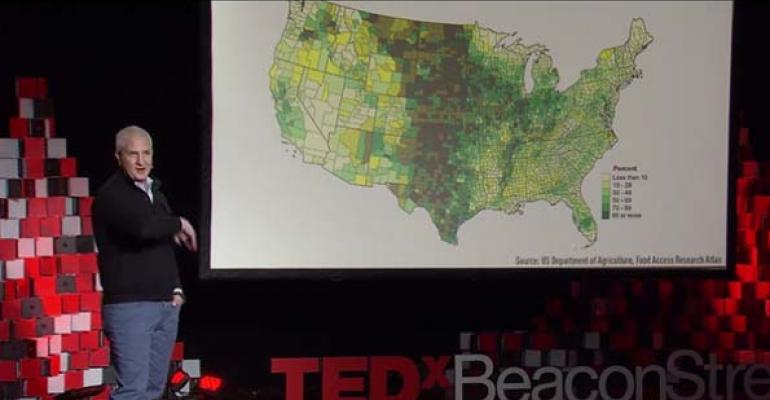 Have 15 minutes? Why not learn something new about our food system—or the people who contribute to it—by watching one of these clips? They demonstrate how everyone from an urban planner to a physician to a fisherman can make a difference.

Miner isn’t a farmer or an entrepreneur, but rather an urban planner. In this fascinating talk about the future of food, he details the problems with how—and where—our food is grown and transported. “People can’t access food, even though they can see it out their back windows,” he explains. What if there was a symbiotic relationship between agriculture and development, instead of a confrontational one? He shows how, in some motivated communities, there is.

Spoiler alert: They’re shrimp, tuna, salmon and cod. And the way they’re caught and/or produced just might destroy our oceans. The author and fisherman explores where to look for solutions and alternatives.

The co-founder of Nature's Path shares his path to inner peace from his early days on his father's organic farm, to an early adulthood marked by substance abuse, to success and happiness as a conscious businessman, husband and father. “Farmers are the unsung heroes," he says. "Every year we keep GMOs and millions of pounds of toxic pesticides out of our environment and off of people’s plates.”

Maryn McKenna // What do we do when antibiotics don’t work anymore?

Can you imagine a world without antibiotics? That seems to be where we’re headed. In this talk, Maryn McKenna takes a wider view at how antibiotic resistance has grown across the globe, from overuse in health care, aquaculture and, yes, food production (she cites that as many as 80 percent of antibiotics sold in the U.S. each year go to animals, not humans). New drugs and technologies may be able to help, but what we really need is change in societal norms around antibiotic use.

5 of this year's must-watch TED talks for the natural products industry
Dec 25, 2014