HomeProducts and TrendsFood and BeverageGrocery and a greenhouse: How BrightFarms plans to shorten the produce supply chain for retail
Recent
Latest
Sponsored Content
How brands can get their trade spend under control – article
Sponsored Content
Going organic lifts everyone up – video
6 natural brands partner with UNSTUCK on new product line to aid refugees
Jun 23, 2022
Sponsored Content
The power of organic messaging – download
Trending
Getting ready for 2023: Trends for brands to consider
May 17, 2022
Unboxed: 7 clean collagen powders with a twist
Jun 21, 2022
12 brands marketing positivity, kindness and joy
Jun 17, 2022
Coca-Cola axes Honest Tea, but its founders are just getting started
Jun 07, 2022
Natural Foods Merchandiser
brought to you by

Grocery and a greenhouse: How BrightFarms plans to shorten the produce supply chain for retail 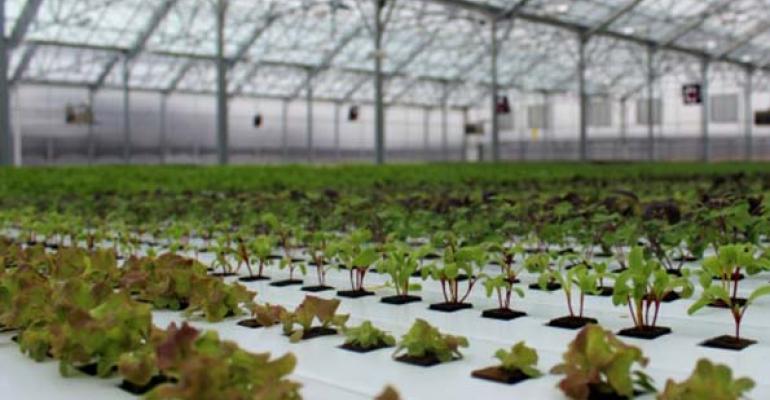 BrightFarms, whose newest partner is Chicago-area Mariano&#39;s, builds greenhouse farms near supermarkets and supplies them with the produce grown there.

New York-based BrightFarms is on a mission to change the produce supply chain at the commercial level. The company builds greenhouse farms at or near supermarkets, and then supplies those supermarkets with the produce grown inside, reducing the time, distance, cost and energy that is normally involved in transporting produce from farm to store. The company is also focused on efficient growing methods, with the mission "to improve the health of the planet by improving the environmental impact of the food supply chain, and to improve the health of society by increasing the relative consumption of fresh vegetables," says CEO Paul Lightfoot.

Last month, the company broke ground on a new greenhouse in the Chicago area. The greenhouse will send all of its produce to Mariano's supermarkets in Illinois and Wisconsin, and is expected to be shipping at full capacity by early 2016. We asked Lightfoot a few questions about how the company works and its vision for the future.

Natural Foods Merchandiser: Tell us what kinds of crops are grown in BrightFarms greenhouses.

NFM: BrightFarms talks a lot about sustainability and efficient farming. How sustainable, exactly, are the BrightFarms greenhouses?

PL: BrightFarms' greenhouses each vary in square footage, but the Chicagoland greenhouse will produce over 1 million pounds of produce per year. Our hydroponic methods use 90 percent less water, 75 percent less land and 98 percent less shipping fuel than conventional lettuce companies.

NFM: Let's talk about your vision for the future. What is your plan for expansion?

PL: We provide local produce to supermarket customers on a commercial scale, year-round basis. We have a business model that, put plainly, delivers better produce--produce that is local, fresher and more sustainable--at about the same price as the long-distance produce that we're displacing from supermarket shelves. Our production is reliable, high quality, food safe and profitable. And our produce is delicious!

We’ve been operating a greenhouse farms in Bucks County since early 2013. You'll see produce from that facility at McCaffrey's Market and A&P Super Fresh stores. We are next opening (this fall) a project in the Washington DC market for our partner Ahold USA, selling our produce at their Giant Food stores and their Peapod home delivery service.

We intend to focus on successfully ramping-up the Chicago and DC greenhouses for the first half of 2016, and then will embark an even more aggressive growth trajectory in the latter part of 2016 and beyond, starting with Kansas City.

NFM: Do you intend to expand the number and types of crops that BrightFarms grows?

PL: We do intend to expand our product lines as well. Today we’re supplying salad greens and herbs. Soon we’ll all be supplying tomatoes, and in the future we intend to explore strawberries, peppers and cucumbers.

We will move into any categories where we can profitably supply produce that is better for the environment that the existing sources.

NFM: Do you see BrightFarms-style greenhouses as the future of produce sold in grocery stores?

PL: Growing locally and sustainably is definitely the future of vegetable production in a future of scare water, land and fossil fuels. Although there will be a number of solutions to today’s food chain problems, we do believe that our model will be an important part of the future of the food industry.